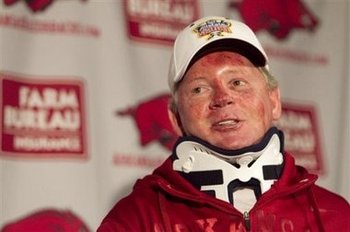 As the sporting world is surely already aware, the University of Arkansas has fired football coach Bobby Petrino. This comes on the tail of four years of Arkansas football revival.

The married father of four crashed his motorcycle and lied about it, beginning his downward spiral. What he tried to cover-up was the fact that an engaged former Arkansas volleyball player was riding with him; with whom he was carrying on a long-term relationship. Jessica Dorrell had been hired for a job at Arkansas, and had previously been given $20,000 in cash by Petrino. So take your pick for his dismissal: dishonesty, cover-ups, morality, adultery… it doesn’t really matter. The point of this post is not to rehash how much of a slimeball Mr. Petrino has become over the years. The point of this post is to alert our readers to the hilarity that is NMA.TV, which produces hilarious Taiwanese animated parody videos. And luckily for us, they tend to produce a lot of funny content mocking disgraced American sports figures (among many other things). So don’t waste any more time, and check out yet another epic entry below. The “elephant in the room” and getting “blown off the road” cracks me up every time I view this:

That 11-2 finish, culminating with a BCS Cotton Bowl victory and a top-five rating, must seem like oh-so-long ago for all parties involved.