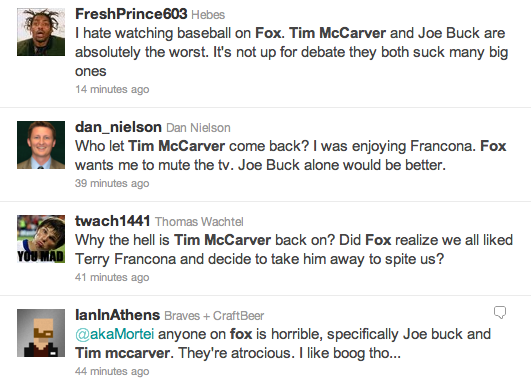 Terry Francona filled in for Tim McCarver during Games 1 & 2 of the ALCS on Fox alongside Joe Buck to rave reviews.  The former Red Sox manager pinch hit for the network while McCarver, Buck’s partner since 1996, had a minor health-related procedure.  For many baseball fans, the partnership of Buck & McCarver has grown tiresome.  Quotes from McCarver like “a game of oblique angles, now a game of oblique injuries” is why he’s on our Mount Rushmore.

Francona gave hope to viewers for a breath of fresh air being breathed into a dormant Fox booth.  It was an admittedly risky move by Fox, but one I thought would be certainly worth the chance.  Here’s what I wrote last week about Francona’s stop in the broadcast booth:

“Francona’s addition has the potential of being a home run.  Fox has found some success in the past bringing in analysts either still in or just out of baseball – Al Leiter’s work in the Cubs/Marlins NLCS stands out off the top of my head.  Other managers like Jeff Van Gundy and Jon Gruden were able to add interesting insights in their early days as broadcasters being just removed from coaching as well.”

“Forget about the mechanics and how smooth Francona was or was not coming in and out of breaks: He was insightful, and genuinely funny, both valuable commodities in broadcasting.”

But most importantly, baseball fans quickly warmed to Francona’s style of analysis.  Here’s a sampling of the overwhelming positive assessments of Terry Francona from Twitter… 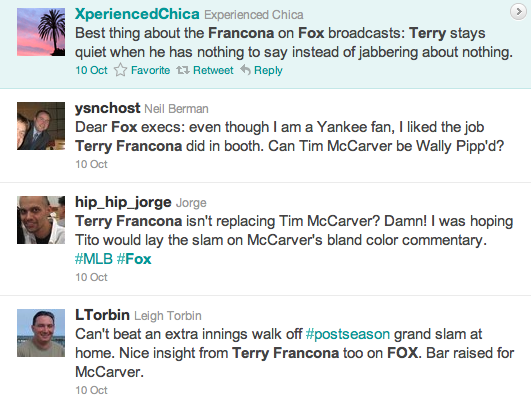 Michael Hiestand of USA Today asked a similar question.  Why wouldn’t networks take more chances with broadcast rookies like Francona that may instantly resonate with audiences versus the same ol’ same ol’ that has grown moldy and stale:

“So while networks commonly add current coaches and players to their postseason studio or on-site preview shows, why not occasionally put some on games? Granted, as TV rights fees have soared over the years, networks understandably could focus on just not screwing up big events. But taking chances on people who don’t sound like they’ve had news media training — like, say, John Madden or Dick Vitale— can bring edge to live big-event TV, which too often is predictable. Francona lamenting on-air that he couldn’t chew tobacco or curse in the booth — and even daring to question almighty technology by disagreeing with the FoxTrax graphic over whether a pitch was a ball or strike — was refreshing. It was like listening to a person, not somebody trying to remember how to speak on TV.”

Networks play it insanely safe with regards to broadcasting games, especially when it comes to on-air talent.  Sometimes there are innovations that succeed or fail miserably in terms of technology, but rarely if ever do networks take a chance on broadcast talent.  Francona’s hiring by Fox was one of those cases… and it worked wonders.

As we mentioned in our NFL Broadcasting Manifesto at the beginning of the year, too often networks treat their top analysts and play by play announcers like they have lifetime appointments.  Fresh perspective and analysis should be welcomed instead of settling for the status quo.  Instead of just throwing token current players or coaches onto already crowded and largely pointless pregame sets, why not focus on new announcing combinations that may connect with a large portion of the viewing audience.  Terry Francona is an example.  So is Steve Kerr.  His addition to CBS’s coverage of the Final Four added a welcome new voice.  Sure, there are iconic combinations like John Madden and Pat Summerall that are able to remain popular for a long period… but even that pairing ran its course in due time.

Not a complete list, but you can get a good idea of just how steadfast these networks are in keeping their broadcast talent locked into positions regardless of popular opinion (see: Morgan, Joe).  Did you have any idea Mike Patrick and Joe Theismann called ESPN Sunday Night NFL games for 18 years??  18 years!  Some of these teams and announcers have found success and popularity.  Others haven’t been missed (see: Packer, Billy) or won’t be when they finally hang up the microphone.

Plenty of other individual broadcasters have been involved in the top one or two broadcast booths at a given network, but have had pairings split up because of network musical chairs and working with different analysts…

This isn’t a plea for networks to wipe the slate clean all across my television.  Jim Nantz is perfect for The Masters.  Al Michaels still belongs on Sunday Night Football.  Marv Albert and Kevin Harlan should call NBA games until the next lockout.  Doc Emrick remains one of the top broadcasters in any sport.  But, at some point, networks need to start taking chances on younger talent and give other announcers a chance on the national stage.  Dick Stockton, as great as he was and as much as he’s meant to broadcasting, should not be calling big time games anymore.  Look at the work of Brian Anderson and John Smoltz, who have shined this postseason at TBS (you could say Smoltz’s analysis has been WRITTEN IN THE STARS!!!).  Where are those individuals in the NFL or the NBA or elsewhere in broadcast booths?

It’s my hope as a writer and a sports fan that the networks learn from Terry Francona and are willing to take more chances in broadcasting games.  You can see it in the reaction to Francona’s work – we don’t need a stuffed suit in the booth that is a home run in a corporate boardroom or the slickest announcer, or the best guy at reading promos.  Fans just want someone they can relate to in a broadcast.  Someone that can help tell the story of the game, add a little insight, and help us enjoy the game.

Gus Johnson and others aren’t the most polished announcers by a long shot, but they are over with fans because of those abilities.  Kevin Harlan isn’t as smooth as Jim Nantz, but he delivers the type of energy sports fans desire.  Bill Raftery isn’t forced onto America like Dick Vitale, but you won’t find a more popular or likable analyst in sports.  This phenomenon doesn’t even have to be restricted to new announcers.  We have been clamoring all year for Vin Scully to announce the World Series.  Not only to pay tribute to his legendary work, not just because he’s still great at what he does, but because it would be something new!

Unfortunately, there are no signs that Terry Francona or any new blood is coming back to the Fox booth anytime soon.  The network took a chance and it paid off with Terry Francona… so why go back and settle for getting destroyed night after night for their coverage for another year?  Why not be progressive?

Fans have spoken, will the networks listen?