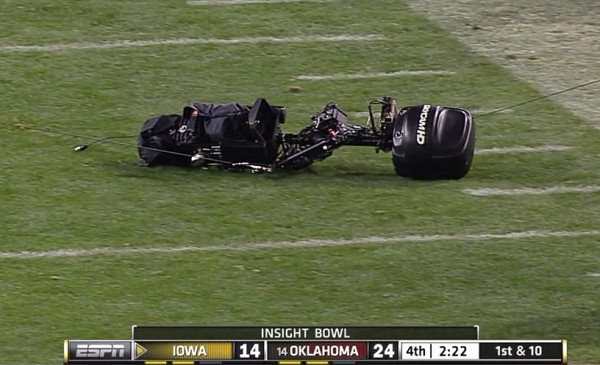 One of the better enhancements to football production over the last decade, the skycam has been a great way to get fans closer to the game. I’ve always wondered, though, if one hovering behind the play would ever interfere with a game. My money was on a blocked punt, but tonight we witnessed what was a dangerous close call as the skycam came crashing down, and extremely close to the Iowa huddle, causing a full three minute delay before heading into commercial break. See for yourself below:

Oddly, the player almost hit in what would have been something out of a Final Destination movie was Marvin McNutt, who was a catch away from tying the Iowa receptions record. Talk about a message from above.

ESPN then reeled the camera off of the field in a moment that likely led to thousands of employees of Radio Shack crying:

Our video shows about a three minute delay, but the delay extended about another two minutes as the officials looked to clear the field of any remaining cables.

Obviously, one of the four guiding cables for the skycam broke or became inoperable leading to the crash and the subsequent messy effort to get the camera off the field. It was a funny moment as picking up the pieces here isn’t exactly under anyone’s job title — a lot of people struggled to figure out what to do as the camera was dragged across the field like a dead animal.

All in all, this capped a somewhat poor day of production for the game. ESPN lost audio during a post game interview and kept showing Iowa’s retiring Norm Parker, who was unfortunately behind a partition in the press box. A nice gesture, but somewhat odd given you couldn’t really see him.

The game wrapped up with Iowa failing to move the chains and Oklahoma getting a cheap touchdown to cover the spread.

While it’s newsworthy and entertaining that this occurred, this was within feet to becoming a major accident. You also have to wonder if the possible cable snapping may have hurt people when it lost slack over the crowd. Hopefully not.

At the end of the day, a huge sigh of relief for Iowa fans as well as people who bet Oklahoma. If you’re curious as to how the skycam works, we found this video which further implicates the likeliness that a cable snapped off of skycam.