Remember when you used to talk about the announcing? Now is the time to strike, given all of the meaningless games in the NFL and all of the inane / rambling / hype -machine jackassess spewing ridiculousness all over each and ever one of them. Right now – the last two weeks and until after the Super Bowl post-game is over – is when your site has the most potential. Ripping into the ESPN.com guys and all of this other stuff is monotonous (and way, way prone to rambling in itself) but more importantly, doesn’t play to your strengths as a writer or a news destination. Criticize piss-poor announcing and make us all laugh like you did for the first 8 weeks of the season. Please. Sorry.

Well, Well, Well Mr. Anonymous. Aren’t we a little pushy??? Just kidding. Mr. Anon is a tad bit right though. While I don’t agree with his opinion of the ESPN.com stuff (some can be funny and it’s always fun to pile on.)…….I haven’t been going in with “All Guns Blazing”. So to speak. So as an early Christmas present to you…..I’m going back to what got me here. All Announcers All The Time.

We’ll be starting with tonight’s live-blog of the MNF Crew and tomorrow with the opening Bowl Game…..the Poinsettia Bowl. So get some Nog and/or Cider and join me by the AA Fireplace this fine eve around 8. We’ll sing carols, exchange gifts, and lay into Mike, Joseph, and Anthony.

For my secret Santa gift I’ve got someone these. HAPPY HOLIDAYS!!!!!

Ben Stiller on the helmet, and is just flat out awful. Ugh….here we go…….

Linemen turn into trucks in the Matrix in case you didn’t know.

BANH BANH BANH….DO DO DO DO.

Can they drag out the start to this thing anymore?

OH YES! Here we go. It’s after 8pm and Tony is no longer funny.

Rudy fumbles early and Ocho Cinco falls on it. “He’s only ever lost one in his career”- TK
Good stat Tony…..keep it up. I’m rooting for you. (Not really)

8:47-Damn look at those shoes! Merton Hanks is a dick…..fined Chad for the most awesomest kicks ever created. Pic tomorrow.

Joe calls the replay as incomplete after the fact. Good job Joe.

God this game is slow as hell already…..they’re even putting time back on the clock. Guys/Gals….we’re going to be here until 3am.

8:56- Internet is going in and out because of the windy conditions here in AA land…..bear with me for a bit.

FYI- Another early present to you all…….Word verification should be off in the comments. Someone verify for me, and let’s get crazy.

Another FYI for you in need of a fantasy QB…..Tavaris Jackson is starting for the Vikings this weekend.

And Rudi finally shows us why the Colts are ranked last in Rush Defense. As Cato June Kaelin

“If they held him longer they’d be married in some cultures.”- TK, You are not funny.

9:16- WWE Raw from DC on USA…..in case there’s too many points being scored in this game for your taste.

Fun Fact- I actually picked up Ben Utecht in a fantasy league.

First Quarter Over: 33-33 Tie Game…….er, there might be some extra threes in there somewhere.

The Mannings would like you to drink Milk, but only if they can trade Kool-Aid, Tang, and a pick to be named.

BJ has left a new comment on your post “Live Blog Tonight- Bengals v. Colts“: The Knicks are beating the Jazz right now going into the 4th quarter

FANENE! Oh no you didn’t!

TD…….Manning to Harrison. Does that sound familiar???

Do you think Rashard “The Missle” Jentry has a fat head?

“You are a big Redskins fan”- MT
“Oh Yeah….started with Cowboys Indians and then I loved Hamburgers and Chris Hamburger and then on to Joe Theismann”- MMc
“Ooh I like that”- JT

Matty Mc is quiet as hell. Know your role Matt! You are a star….speak up!

Dwight Freeney is a man’s man.

“We’re already seeing Vince as a leader”- MMc from the closest camera angle ever.

“I’ve sat next to the sexiest man alive before but it’s usually Joe. At least this person has actually been voted for”- TK
“And is actually sexy”- MT
Whoa Mikey. The sexual harassment thing is still on everyone’s mind. Be Careful.

9:42- Seriously the commercials during this game are ridiculous. Every two seconds I swear.

Brian has left a new comment on your post “Live Blog Tonight- Bengals v. Colts“: McConaughey was introduced, then oddly quiet for about five minutes. In that time, was he: a) passed out with his head in Mike Tirico’s lap; b) banging a redhead who happened to catch his eye; or c) playing his bongos

D) All of the Above

BJ has left a new comment on your post “Live Blog Tonight- Bengals v. Colts“: I just walked it out. They need to play that song every commerial break.

“I’ve always loved the psychology of sport. Football is the ultimate team sport. If one out of eleven is off….you know where the leak in the bucket is”- MMc

Brian has left a new comment on your post “Live Blog Tonight- Bengals v. Colts“: Even as great as Matthew McConaughey just was, I still feel cheated, like he could have been better. If ESPN can’t even get it right with Wooderson in the booth, what hope is there for the future of this franchise?

A-F’ing-Men Brian. I don’t even care about life anymore.

52-29 Nuggets over the Wizards……maybe the fight did the teams some good.

9:56- “Interestingly enough Peyton Manning looks at all the receivers”- JT, Really??? That’s a great idea for a QB…..you should have a training video Joe.

Joshua has left a new comment on your post “Live Blog Tonight- Bengals v. Colts“: I think we should replace TK with McConaughey. I know TK is trying to be witty and amusing all the time, but I think as viewers, we would benefit much more from deep philosophical insights such as “keep livin'” all while trying to avoid being the “leak in the bucket” of life.

Wait…..no. One more play for the Bengals. Good call Marv.

And that’s the half…..for real. Break time. See you in a few. If anyone hears Berman say anything stupid please post it. 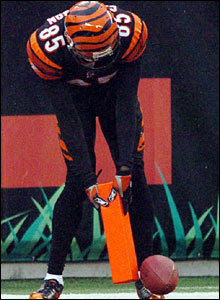 Bengals stuff the Colts on the first drive of the second half. Questionable run on 4th down there.

10:24- And then the Bengals make the exact same mistake by running on third and a yard.

10:30- Again with the Rush…..ESPN is screwing up again with the song purchases. The use “Fly By Night” thinking the ball will be flung around all over the place.

Why would you ever put up an AFC Finalist Banner? That’s just stupid. It’s like rubbing it in Peyton’s face that he is Awful in the playoffs.

Addai for about 40 yards and gets hurt.

I know I’m probably not the first person to call them this, but the Denver Thuggets are up 77-61 in the third.

TK, I underestimate your power of reasoning and logical deduction. I knew the Colts were scoring touchdowns, but I had no idea that “Cincinnati is going to have to score more than field goals to catch up.” You my friend, are the epitome of everything a color commentator should be. I retract my request to replace you with Mr. McConaughey, because while his looks may be sexy, your commentary is far sexier.

“She almost fainted once when he was bit by a dog.”- Michele Tafoya

FYI- I’ve never seen a more important game feel like it was getting less important by the minute. It just feels like week one all over again. I mean even the announcers are getting bored.

“Peyton Manning hasn’t gone downfield because he hasn’t had to. His receivers haven’t had a miscue.”- JT, this comes two minutes after Joe blammed the receivers for Peyton’s three incompletions. God he is the king of double-speak.

Chad Johnson is out of the game. A contusion of some sorts.

10:53- I have no idea why the Bengals are still trying to run the ball.

“Here’s the decision Marvin Lewis has to make. You have to kick the FG here and let your defense stop them”- JT, Umm what game are you watching? I don’t see much stopping Joe.

Thuggets were up 30…….Wizards have cut the lead to 3. Wow. Having no bench will do that to you. And Gilbert just mean mugged the Pepsi Center.

Bengals ball at the 50……..do something please.

Chad Johnson’s back in the lineup. And Marvin Harrison is now hurting……looks like a jammed finger.

Brian has left a new comment on your post “Live Blog Tonight- Bengals v. Colts“: Guys, I’m only half paying attention to this game…but did Theismann just correctly call a replay review?

Ummm……I’d give that a maybe. The jury is still out on that one.

11:16- Update: Is it just me or has Tony K. not said a word in this second half? It’s like….as soon as Matthew McConaughey left the booth he just took a nap.

11:21- Ricky Proehl is wide open and Peyton throws behind him…..Joe blames it on the fact that “Ricky just doesn’t know the offense well enough to sit down on that route.” Never ever the QB’s fault Joe.

Interesting note: The Bengals have a total of 52 return yards. On 7 Returns.

Right now, Matthew McConaughey is… A) Admiring himself in a mirror a’la Uncle Jesse B) Reading the works of Plato C) Banging a hot chick D) Drooling over his newly acquired Theismann autographed 8X10 You decide.

Damn that’s tough. I’d have to go with C…..when is he not banging chicks. But there’s a possibility for an E though…..Banging a hot chick while drooling over his newly acquired Theismann photo.

ESPN in a classy move has a montage of Lamar Hunt when everyone has already tuned the game out. You stay classy Leader.

11:36- 2 minute warning and the Bengals are running the ball. Good call Marvin.

Watson runs out the clock, and the Bengals are bitches. That was a horrible performance, but more importantly play calling.

And I’m out like Tony Kornheiser in a broadcast. Thanks for the comments and I’ll see you tomorrow.