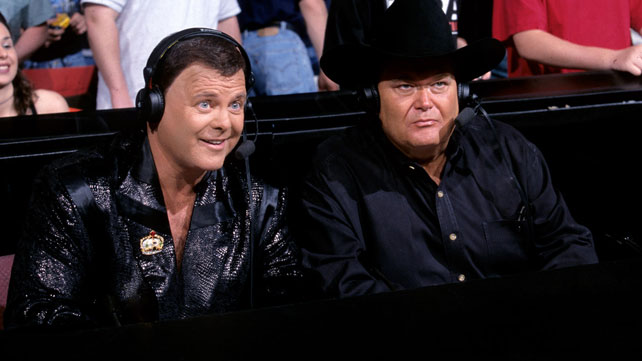 When WWE was at its height of popularity in the Attitude Era, Jim Ross and Jerry Lawler provided the commentary. The duo of Ross in his cowboy hat and Lawler with his king’s crown are two of the most well known personalities in the history of professional wrestling and announced some of the biggest moments in WWE. The pair are right up there with Gorilla Monsoon and Bobby “The Brain” Heenan as the best and most significant announcers in wrestling.

While Monsoon and Heenan were the voices for the Hulk Hogan era of the 80’s and 90’s, Ross and Lawler were the team that brought WWE through the Monday Night Wars era and the competition between WWE’s Monday Night Raw and WCW’s Monday Nitro.

So with WWE celebrating the 25th anniversary of the first episode of Monday Night Raw on January 22nd, it was only appropriate that WWE would announce that Ross and Lawler would be reunited for the special episode.

Ross and Lawler will provide commentary at the Manhattan Center in New York, which is where Raw held their first episode 25 years ago in 1993. WWE will run two buildings next week for the 25th anniversary show with the program also airing from the Barclays Center in Brooklyn. It’s likely that Raw’s current broadcast team will handle the action from there.

WWE is going to be pulling out all the stops for the 25th anniversary episode of Raw and the nostalgia will be high as there will be many more legends making an appearance.

Raw has been WWE’s flagship show for these past 25 years through the battle with Nitro, the coming and going of the Attitude Era, and now the WWE Network era. Perhaps no two men are as synonymous with WWE on Monday nights as Ross and Lawler and fans will certainly enjoy the chance to hear them behind the mics yet again.