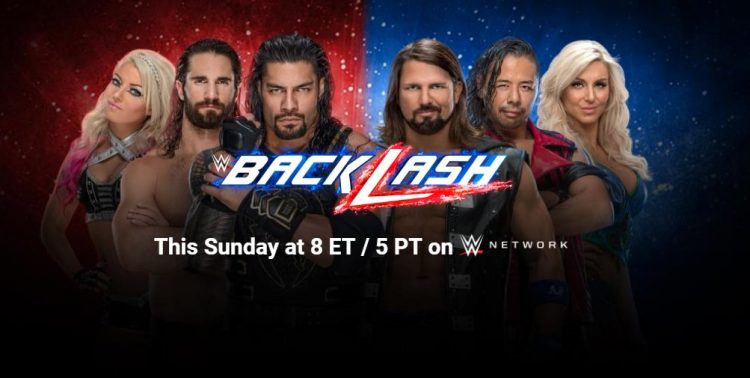 This Sunday night in Newark, New Jersey, World Wrestling Entertainment presents Backlash on WWE Network. It’s the third major WWE event in the last month following WrestleMania on April 8 and the Greatest Royal Rumble event from Saudi Arabia on April 27th.There are no more Raw-only or Smackdown-only pay-per-view events. All PPVs feature both main roster brands now. A few weeks ago, they also did the Superstar Shake-up that saw Raw and Smackdown talents switch brands. There’s been a lot of WWE content of late even for the most hardcore fans out there.Backlash is hurting in star power because there’s no Universal Championship match with Brock Lesnar, while Ronda Rousey isn’t advertised to be a part of it. Rousey is set to take part in her first WWE live events this month when she wrestles Mickie James in singles matches on the upcoming European tour, but those matches will not be televised.

There are nine championships on the main roster, but only five of them are advertised as being a part of Backlash. Three of the five title matches are rematches for the champions who recently lost their titles, so there’s a lot of repetitiveness on this show.In terms of building to the matches, there’s really one match with a good build to it and that’s Styles vs. Nakamura for the WWE Title. The reason that one has been good is the heel turn of Nakamura. Every other match has either had very little build or bad storytelling to set up the matches. I think the main reason for that is because there was so much attention on the Greatest Royal Rumble event last week that WWE finally remembered they have a Backlash show to promote too.Here’s the full lineup:

4. The Miztourage will try to help The Miz beat Rollins…and they will fail The Miz is going for his record-tying (with Chris Jericho) ninth Intercontinental Title reign. Seth Rollins won the Intercontinental Title at WrestleMania last month and he successfully defended it in a great Ladder Match at the Greatest Royal Rumble event. This past Monday, Rollins also had an outstanding match with Finn Balor where Rollins was able to retain the title again.The Superstar Shake-up saw The Miz move from Smackdown to Raw. What we don’t know is if Miz wins the IC Title, does it come with him to Smackdown or would he go back to Raw? The assumption is that Miz would take the title to Smackdown, but we know Rollins would get a rematch for it, so maybe they could do a title change here and get it back on Rollins. I don’t know if that is happening. I don’t think they should.What I see happening is the Miztourage duo of Curtis Axel and Bo Dallas may try to help Miz win the title back because ever since Miz left Raw, Axel and Dallas have been trying to find their way without him. It would be a nice way to have a false finish with Miz nearly winning due to their help. Ultimately, I see Rollins keeping the title and having a long reign as a great IC Champion because Rollins is performing at a very high level right now.As I mentioned earlier, Miz vs. Bryan is the money feud on Smackdown. Pencil it in for a SummerSlam match. Their matches on this show are just being done to keep them busy doing other things until then.3. Roman Reigns will beat Samoa Joe in the longest match of the nighthttps://www.youtube.com/watch?v=TECRcNndvUoIt’s another show where I’m picking Roman Reigns to win. That did not go well for me at WrestleMania and Greatest Royal Rumble when he failed to beat Brock Lesnar for the Universal Title, even though that felt like the obvious outcome. What’s the end game? No idea. I think Lesnar’s reign has been boring and maybe WWE will want Braun Strowman to beat him. I’m not sure if that’s the plan, though.The build to this match has been poor because it’s just Joe doing promos about how Reigns can’t beat Lesnar. Joe is a part of Smackdown now while Reigns is still on Raw. So unless something changes, this will be their last TV match until the next Superstar Shake-up next year. We’ve seen Reigns vs. Joe plenty of times, so it doesn’t feel like a big match at all either.Joe can lose this match and be a part of the WWE Title feud on Smackdown. I don’t think a loss would hurt Joe that much at all. This will be the longest match of the night at over 20 minutes.2. AJ Styles vs. Shinsuke Nakamura will be the match of the nighthttps://www.youtube.com/watch?v=PX2IZklnnW4&t=1sThe story here is that Styles beat Nakamura clean at WrestleMania in what was a good match, but not the wrestling classic most of us expected.After the WrestleMania loss, Nakamura was a sore loser because he hit Styles with a low blow uppercut. In the weeks that followed, Nakamura was a jerk about it by hitting Styles with more low blows and when he would get asked about it, Nakamura replied with a smartass answer: “No speak English.” The heel turn has worked well for Nakamura.At the Greatest Royal Rumble event, I predicted Styles would remain WWE Champion “after a controversial finish.” I was on the right track because they had a double-countout finish that led to this bout becoming a No Disqualification match. It would have made more sense if Styles lost that match by disqualification to set up No DQ, but in today’s WWE they don’t seem to build up to the matches the right way anymore.I think making this a No DQ match was smart because they’ll be able to stand out from everything else on the card by using weapons, breaking tables and brawling around the arena. There’s no need to slap on a chinlock to kill two minutes. It needs to be more of a fight and I think that’s going to make it an outstanding match.

I mentioned Nakamura’s penchant for throwing low blows at Styles. It has happened for the past month with Styles doing nothing to really retaliate. That’s why I think something clever is in store in this match with Styles blocking the low blow by wearing a protective cup to cover up his family jewels. When Nakamura goes for the low blow, Styles will no-sell it and Nakamura will sell an arm injury. Styles will pull the protective cup out, fans cheer when they realize what happened and Styles hits the Styles Clash to win.If it doesn’t happen that way, then Styles looks like a fool for taking repeated low blows without doing anything about it.This pick is far from a sure thing. I’m honestly 50/50 on this match in terms of my prediction.When Nakamura turned heel, my immediate thought at that time was that WWE did it because they wanted to put the title him on as a bad guy. I’m not so sure anymore. With Samoa Joe waiting in the wings as a potential opponent for Styles, that makes a lot more sense and Joe could be the one who is the next WWE Champion.My interest level is high to see how good of a match they can have and what kind of creative direction there will be for the meeting.

This feels like an average show with only Styles vs. Nakamura sticking out as a well-built feud that should lead to an awesome match. The rest of the card should produce some good matches because the current WWE roster has a lot of talent, but Backlash does not feel like a major show at all. I think the Money in the Bank PPV next month will be a lot better.You can watch WWE Backlash on Sunday, May 6th at 8 p.m. ET/5 p.m. PT on WWE Network. There’s also a one-hour Backlash Kickoff show starting at 7 p.m. ET/4 p.m. PT as well. If you miss it live, you can watch it on demand at your own convenience. I’ll be back on Monday for a review of the event.