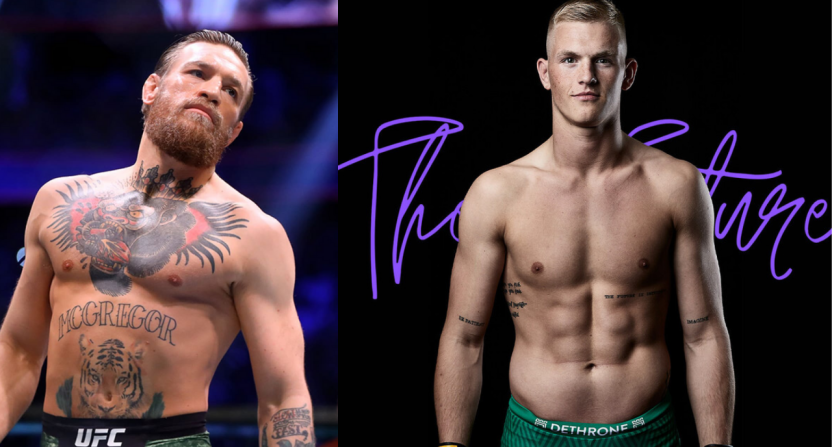 The UFC has produced some memorable fighting titans, but few have caught the public imagination more consistently than Conor McGregor.

The influence of The Notorious has been particularly strong in his native Ireland, and has inspired many people to get into MMA, including one young fighter from Dublin who is, almost inevitably, being compared to McGregor.

Ian Garry made his UFC debut last year at Madison Square Garden in New York, where he defeated Jordan Williams in the final seconds of the first round. He followed up that first UFC success with victory in a welterweight main card contest against Darian Weeks in April at UFC 273.

In fact, it has been a whirlwind 10 months for the 24-year-old. Garry signed with the UFC, traveled to Florida to train with Sanford MMA, married, and made his debut in a short space of time.

In 2021, he was placed fourth on ESPN’s list of fighters under the age of 25, underlining his huge potential. MMA fans and sports betting enthusiasts in Ireland and around the world are taking note of the rising star, and the comparisons with McGregor have proved irresistible to most pundits.

But is Garry really the next McGregor? Could he even outdo his countryman?

Garry has spoken about being a fan of McGregor, and even met the older man while he was working in Dublin. But his own story is an impressive one, showcasing not just talent and ambition, but a mental toughness and will to succeed that has helped him to quickly rise through the ranks.

He started his training in MMA supported by Team KF in Dublin, after dropping out of college back in 2017. He used to train in boxing and judo as a kid.

He also spent time playing Irish sports such as hurling and Gaelic football, but he soon took to MMA, particularly striking, and made his amateur debut in November of that year.

He had an impressive record of 6-1 as an amateur over the next 12 months, before making his pro debut in February 2019 for Cage Warriors, where McGregor was previously a double champion.

Garry won six straight fights to start his pro career, five of which were finishes, earning him a shot at the Cage Warriors title in June 2021 against Jack Grant.

At this point, adversity struck. Garry tore his right PCL five weeks before the match. He was also fired from the Team KF gym 10 days after the major fight, though the reasons for his dismissal have yet to be revealed.

Struggling with his leg injury and supported only by his then-girlfriend Layla Machado, Garry turned up in London for the fight but was told by Cage Warriors that he couldn’t fight without a corner. So, Garry turned to friend Paul Hughes – now a Cage Warriors champion himself – to take on the role.

Garry went on to win through a unanimous decision, making him the new welterweight champion, and within 24 hours the UFC called and offered him a contract.

Last summer, in preparation for his UFC debut in November, Garry began training at Sanford in Florida, under coaches Henri Hooft, Greg Jones and Jason Strout, and alongside an impressive roster of fighters that includes the UFC contenders Gilbert Burns, Michael Chandler and Vicente Luque.

In fact, Sanford’s head coach Hooft has said that rather than taking after McGregor, Garry has more in common with welterweight champion Kamaru Usman.

Usman arrived in MMA as a wrestler, whereas Garry is a striker, but according to Hooft, Garry shares Usman’s patience, being willing to improve steadily and then go for a title belt at the right time.

Usman no longer trains at Sanford, but the world’s best pound-for-pound fighter visits the facility on a regular basis to practice with friends and comrades. Usman had the opportunity to observe Garry train on March 24, and was reportedly impressed.

Among the most positive aspects of Garry’s fighting skills is his vision and ability to see openings. Against  Williams, he took damage early in the fight, but won with a big counter right and flurry to finish the fight, combining fighting vision with power and impeccable timing.

Whereas some fighters might resent being constantly compared to an older competitor, Garry has embraced the McGregor comparisons, and the respect appears to be mutual.

Following the Williams fight, McGregor posted several complimentary messages on social media, and Garry himself has said that he doesn’t see the comparison as being any cause of pressure. Still, while the ‘next McGregor’ tag has been a source of pride and a helpful way to mark out his identity in such a competitive sport – there is little doubt that Garry’s talent, mental strength and ambition give him the chance to strike out and forge his own unique reputation in the octagon.