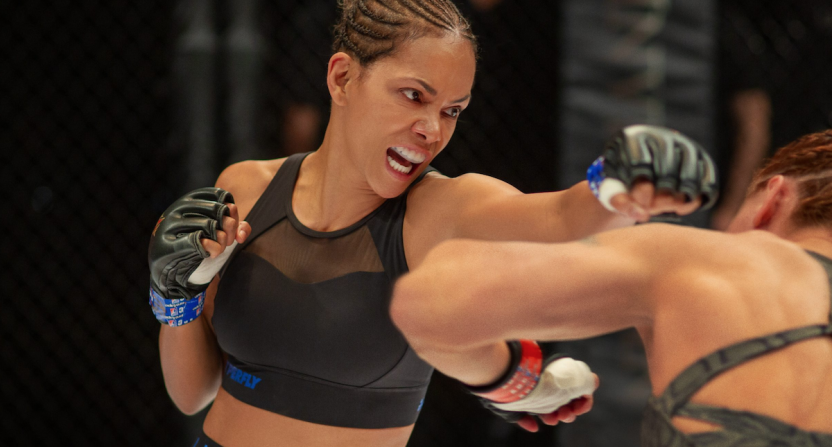 The minimum expectation for a sports movie is that the action looks authentic on screen. Bruised, Halle Berry’s MMA film, certainly meets that standard.

Anyone wondering if Berry might be too pretty or delicate to believably portray an MMA fighter will quickly discover that she looks like the real deal. (Her performance in action roles like John Wick: Chapter 3, four X-Men films, Die Another Day, and Catwoman should show otherwise, too.) Perhaps the most impressive aspect of her performance is the harsh, grueling training sequences that her character puts herself through to make a comeback to the ring.

Yes, there are training montages. Maybe they’re not as inspiring as those in Rocky IV, but you may feel pain just from watching Berry grind through box jump burpees, sled pulls, spider crawls, leg lifts, crunches, and pull-ups. And those workouts don’t include her sparring sessions in the ring. Maybe the punches can be faked, but the jiu-jitsu style grappling can’t.

But the film’s story is largely compelling as well. Berry plays Jackie Justice, a once-promising UFC fighter who chooses to quit a match, effectively ending her career in disgrace. Justice has no desire to get back in the cage, preferring a simpler life of housecleaning gigs, despite constant pushing from her manager/boyfriend (Adan Canto, Designated Survivor).

Despite how her short career ended, Justice made enough of an impression to still be recognized by fans on the street and promoters at fights. That leads to one key event which leads to her path back to professional fighting. Challenged at an underground match, Justice eventually takes down someone far bigger and stronger, impressing the fledgling promoter (Shamier Anderson) of a women’s MMA league.

Enticed by the promise of a potential big payday and title fight that could fuel her return to UFC, Justice decides she has to take the fight when the six-year-old son (Danny Boyd Jr.) that she abandoned shows up on her doorstep. The boy’s father was killed in an undercover police operation and there’s no one left to take him, as Justice’s estranged mother (Adriane Lenox) makes painfully clear.

With a reason to fight and renewed purpose, Justice takes the offer and begins working with top trainer Buddhakan (Sheila Atim). Skeptical that Justice has any skills or desire left, Buddhakan is merciless on her fighter, training her to the point of collapse every day. Yet she softens upon finding out why Justice is fighting again, sympathizing with a young mother whose circumstances meant she had to give up her child.

Berry directed Bruised as well, her first time behind the camera. And though the rookie director does a solid job overall, she may have let down the Academy Award-winning actor when depicting Justice’s infamous match early in the film. Berry makes a curious choice to film the sequence from a first-person perspective, showing the action through Justice’s eyes rather than a more conventional view of the fight.

Perhaps the intention was to show Justice’s frenzied state of mind or to demonstrate that her memory of that night was hazy, maybe something she’s trying to forget. But the first-person view makes for an incoherent scene that gets the movie off to a shaky start. Even more so when we don’t see anything else from that perspective in training or the climactic match of the story.

As a first-time director, Berry also might have followed a script (written by Michelle Rosenfarb) more closely than a more assured filmmaker might have. The narrative takes a turn about three-quarters of the way through that’s curious at best, head-slapping at worst.

It’s a creative decision that undercuts Buddhakan’s role and Atim’s excellent performance, sidelining a character important to the story at arguably its most important moment. With all due respect to Stephen McKinley Henderson (Fences, Dune), a fine actor and recognizable face who’s appeared in many films, we don’t spend most of the movie investing in his character so he’s a less engaging presence when Justice faces “Lady Killer” (MMA fighter Valentina Shevchenko) in the title match.

The performances by Berry and Atim make Bruised worth watching, but the ultimate path of the story feels disappointing when everything leading up to it is enough to pull you in as a viewer. Hopefully, this isn’t the last film Berry directs. With stronger material, and maybe without the pressure of also playing the lead in the film, she may have taken a next step in what’s already been an accomplished career.

Bruised is currently available for streaming on Netflix.