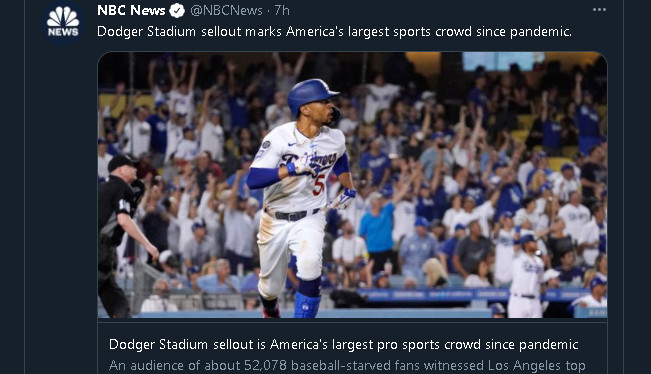 Anyone who spends any length of time covering sports learns to ask if there are exceptions to particular claims. Apparently, though, that wasn’t the case for the people running the NBC News Twitter account:

As many of the replies there show, the language in the original tweet is obviously wrong. Both the Indy 500 and a boxing match at AT&T Stadium in Dallas drew significantly more fans. The description’s “largest pro sports crowd” is perhaps a bit more accurate, but the initial tweet did not include that caveat. And it’s a little silly to go around bragging about a “largest pro sports crowd” when there have been larger audiences for other sports events.

There are a lot of questions to be asked about if it’s really worth celebrating particular attendance thresholds at a time when the COVID-19 pandemic is still causing a lot of infections and deaths. There’s at least an argument that none of these events should have been bragging about how many people they brought in. But, because they all did, we do have some data on the in-person attendance for each of them. And that makes that NBC News claim of “America’s largest sports crowd since pandemic” look very silly indeed.