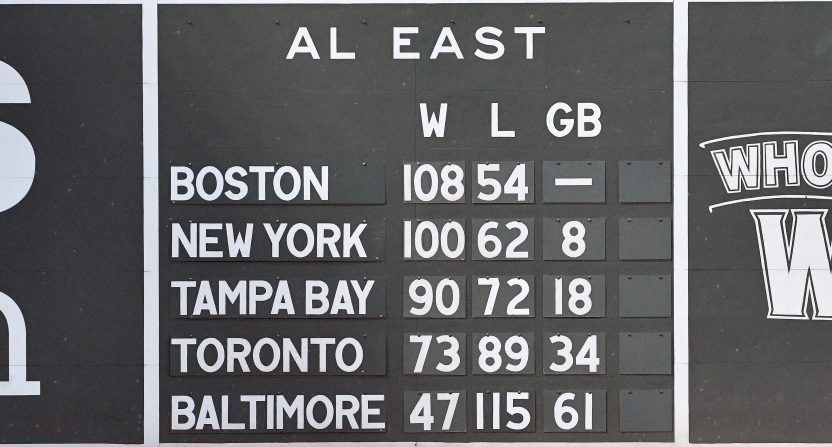 It’s actually hard to believe the Yankees and Red Sox haven’t met in the playoffs since the Red Sox ALCS comeback 2004, a year after the Aaron Boone-driven Yankees ALCS win.

In the thirteen seasons between 2004 and 2018, the Red Sox made the playoffs seven times, the Yankees nine times. But they haven’t met until now, in what feels like a completely different era for baseball and for sports broadcasting. There’s no doubt that, given how the bracket shaped up, this was the best possible outcome for Turner, which has the American League side of the playoffs this year. (FOX has the NL, and the World Series.)

How big of a deal is it for Turner? There are a few ways to look at that.

We’ll start with the positive: for a divisional series, it’s going to be an improvement. Last year’s NLDS coverage on TBS averaged 3.7 million viewers, which was actually up from Turner’s 2016 ALDS coverage. And TBS had Cubs-Nationals propping that up, too, including a decisive game 5 that brought in 7 million viewers. This year’s Yankees-Red Sox series is the star, of course, and it should do very well. But TBS also has Cleveland-Houston on the other side, another series featuring compelling storylines (Cleveland’s continued quest to end their World Series drought up against the defending World Series champions) and decent-to-large markets.

I don't know how you feel about Yankees/Red Sox but I have a pretty good guess how Turner Sports feels about it: pic.twitter.com/oiyLk4as2k

There is some inherent bad news though, and it’s obvious: both of these series could be over after three games, and the upside is just five. That’s the downside to the MLB seeding system; the 108-54 Red Sox are now going to face a 100-win team in the ALDS, while the Astros (a team that won 103 games, in an incredibly top-heavy American League) get 91-win Cleveland. It’s not the most balanced scenario, but it is compelling, even over a short series.

Turner will take it, obviously. While it must be tempting for executives to hope for another ALCS matchup between the two, that’s obviously not a given, and this does at least guarantee one of the two will make the ALCS.

And the best news of all, at least from the network perspective: both of these teams look poised to return to the playoffs again and again in the near future, so we could get more matchups, perhaps in the ALCS. Then again, that’s what we thought in 2004.