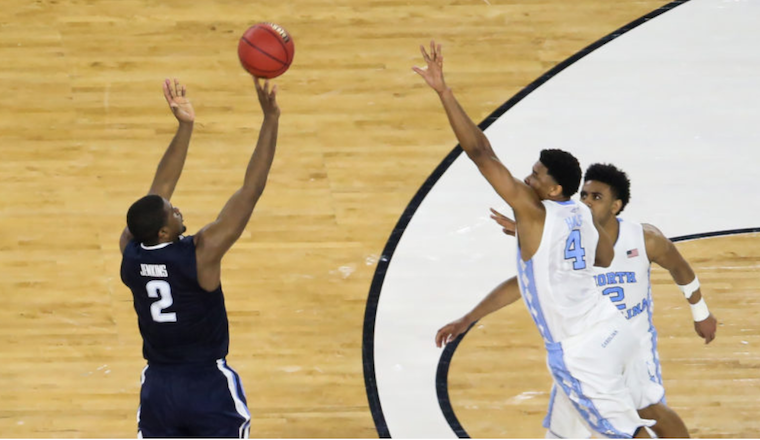 In the dual partnership between Turner Sports and CBS, the Final Four will air on cable, on TBS, this year. As part of the national semifinal coverage on Saturday, TBS is going even bigger with their pregame and studio coverage than in years past.

Are you ready for a three-hour, Super Bowl-sized pregame show for the Loyola Chicago-Michigan and Villanova-Kansas games? As part of the coverage, TBS will employ not one, not two, but three different studio crews to break down the action.

Coverage begins at 3 PM ET with At The Final Four, which will be hosted by CBS’s Greg Gumbel. Joining him will be a foursome of analysts who Turner is billing as all former national champions. First is Tennessee’s Candace Parker, who has been working the tournament throughout for Turner/CBS. She will be joined by Danny Manning of Kansas fame, Christian Laettner of Duke fame/infamy, and Kris Jenkins, Villanova’s hero from the 2016 National Championship Game.

Yes, we were robbed of a million Laettner-Grayson Allen-JJ Redick compilation of Duke villainy this weekend.

Manning and Jenkins should be able to provide some more contemporary commentary for the games. Manning is the current coach at Wake Forest, while Jenkins obviously won a national championship with Villanova just two years ago. It will be interesting to get Jenkins’ insight on the current Villanova team and if the Wildcats advance, you can imagine him sticking around for Monday’s coverage as well.

Following At The Final Four is a different show at 4 PM ET, The Final Four Show (I hope you’re keeping score at home), which will feature another two studio crews. Gumbel and Parker will stick around for the first hour of their second different pregame show while the guest analysts are swapped out for regulars Brendan Haywood and Seth Davis. For the second hour, Ernie Johnson takes the anchor’s chair with Kenny Smith, Charles Barkley, and Clark Kellogg.

Monday’s championship game will be a mix of CBS and Turner personalities. It’ll be the Inside the NBA gang of Johnson, Barkley and Smith, joined by the CBS contingent of Kellogg and Davis. The coverage will also showcase special guests, likely depending on which teams advance from the semifinals. Additionally, the individuals working the teamcasts for Saturday and Monday will likely be named later this week.

CBS and Turner have certainly been trying to create an even bigger atmosphere around the Final Four games with this supersized coverage, from the multiple pregame sets to the multiple broadcasts with the homer feeds throughout the Final Four. At times, it can be a little overwhelming, especially with so many individuals taking part in the coverage. But in terms of special event coverage, from the Final Four to the National Championship Game in college football with ESPN’s megacast, the networks are deciding that bigger is definitely better.