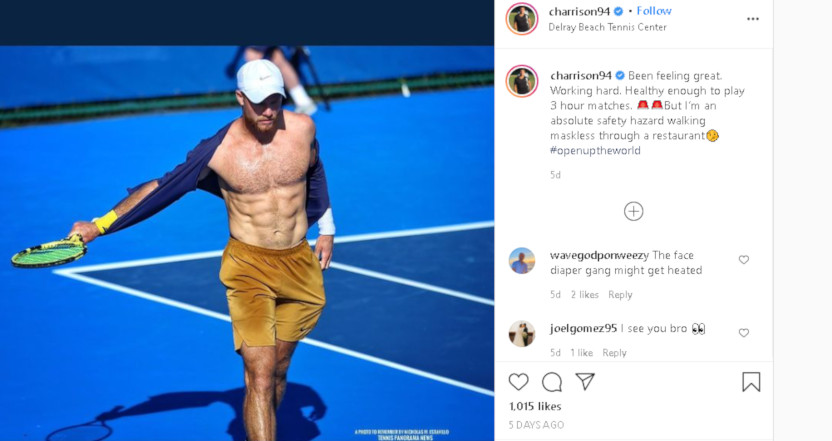 Christian Harrison is on a remarkable run at the ATP’s Delray Beach Open this week. The 26-year-old American tennis player, ranked No. 789 in the world, advanced to his first ATP Tour semifinal Monday with a 7-6(2), 6-4 win over Gianluca Mager, which came after his 7-6 (3), 6-2 upset of top tournament seed Cristian Garin Saturday in the second round. However, the biggest wider-interest headline Harrison made was over his refusal to conduct an on-court post-match interview after his win against Garin over the requirement that he needed to wear a mask for the interview thanks to COVID-19 precautions. As tennis journalist Ben Rothenberg noted Monday, that led to a $3,000 fine for Harrison, and that led to him agreeing to the mask mandate after his quarterfinal win Monday:

Per ATP, Christian Harrison was fined $3,000 for not doing his on-court interview after his second round win in Delray Beach (refusing because it required his wearing a mask).

Harrison wore the mask and did the interview today after his quarterfinal win so as not to lose more $.

Harrison has previously spoken out against masks on Instagram, including an “#openuptheworld” tag in a post last Wednesday (screencapped at top). But it’s interesting to see him take that stance to an on-court interview, get fined for it, and then change his stance after getting fined. And as SI’s Jon Wertheim noted Monday night, stances like this from players are challenging for tennis with its highly-international roster and schedule:

One of the reasons there's so much uncertainty in tennis: administrators have had to convince government officials that the players are not-contrary to reports-blazingly irresponsible + Covid-indifferent. Imagine the bleary-eyed folks, at say @AustralianOpen reading this account. https://t.co/pKj16WXIlp

Wertheim expanded on that in a recent mailbag, where he touched on Australian government concerns ahead of the just-started Australian Open:

Long as we’re here, heard from multiple sources that the COVID conduct of the ATP players in 2020—presumably, the Adria Tour, the absence of social distancing, Zverev playing a match and then casually referencing COVID-like symptoms, the mask skepticism—were a complicating factor when events and governing bodies such as Tennis Australia have negotiated with governments. I did a radio show in Melbourne recently and had question after question thrown at me about whether ATP players would comply and whether they would take the vaccine if offered. Moral of the story: actions have consequences. And the irresponsibility of a few can really imperil the enterprise for all.

We’ll see if Harrison continues to wear a mask going forward, or if he decides to go against that and pick up some more fines.