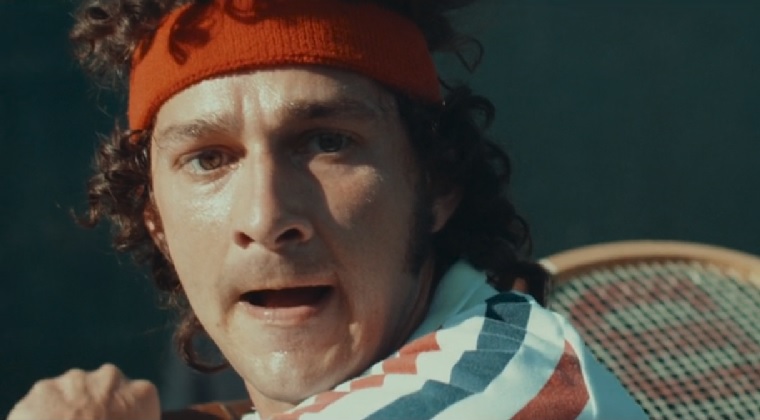 Shia LeBeouf playing John McEnroe might be a tough sell for many sports fans, and maybe some moviegoers as well. But don’t write off Borg vs. McEnroe because of that. Doing so would deprive you of an impressive performance by LeBeouf and a pretty damn good sports movie.

Actually, to put Borg vs. McEnroe in a “sports movie” corner probably doesn’t give it enough credit. This is a compelling character study in what two people feel it takes to be the best tennis players in the world. (The movie is available on digital video, if it’s not playing theatrically in your area.)

On the surface, Bjorn Borg and John McEnroe appear to be two entirely different players. They were certainly portrayed that way in the press. Borg was “Ice,” the machine whose cold discipline fueled winning four consecutive Wimbledon titles. McEnroe was “fire,” the temperamental hothead who made the game bend to his ferocious will.

But virtually the entire point of this movie is to explain that the narrative leading up to Borg and McEnroe’s inevitable showdown at the 1980 Wimbledon final wasn’t nearly so simple.

Longtime tennis fans might already know this, but Borg wasn’t nearly the icy champion he looked like on the court. He was a hothead himself as an adolescent. Director Janus Metz portrays much of this through flashbacks which show Borg’s lack of composure (and financial class) getting him kicked out of his tennis club.

But coach Lennart Bergelin (played by Stellan Skarsgard) sees Borg’s skills and recognizes his outbursts for being a hatred of losing and a burning desire to win. Eventually, Bergelin gets through to Borg, telling him to channel those emotions into his game, rather than demonstrating them on the court.

So when Borg (Sverrir Gudnason) sees McEnroe acting out on the court, he recognizes something very familiar. Perhaps McEnroe is what Borg would have been had he not heeded Bergelin’s advice to rein in his temper. Yet if Borg had done so, he probably wouldn’t have become the best player in the world who regularly won French Open and Wimbledon championships.

Everyone around Borg — notably his fiancée, Mariana (Tuva Novotny) — believes that he’s watching McEnroe’s matches on TV to scout his competition, the American sensation whom he’s certain to face. But there’s also a fascination. McEnroe is also channeling his emotions to fuel his game. He’s just using them in a different manner than Borg.

Is that a little bit too on the nose, conveniently fitting Borg and McEnroe into a narrative? Perhaps, but it’s also a commentary by Metz and writer Ronnie Sandahl on how the rivalry was portrayed by media and fans. It was easy to depict the two rivals as polar opposites, the cool assassin versus the rage monster. In one scene, McEnroe and his father meet with a marketing rep who wants to promote the star as a rebel, touting his wild side. But McEnroe’s father objects, saying it’s too easy, too simple. McEnroe says nothing, but appears to be dismayed at how he’s perceived.

This comes up repeatedly during the film. We see Borg objecting to the idea that he’s a Swedish tennis machine with no feelings. He’s worried about how the narrative will focus on him losing if he falls to McEnroe, rather than all the winning that came before it. McEnroe gets agitated when reporters only want to talk about his behavior, not the tennis match that was just played. Why doesn’t he get credit for his great play on the court instead of his tantrums at officials?

Above all, the movie wants to convey how hard it is to be the best at something, what each of these competitors has sacrificed to achieve greatness.

Borg mistakenly believes that he could really be a normal guy if not for tennis. But he’s imprisoned by routine. Everything leading up to Wimbledon — the hotel room, the rental car — has to be the same as it was the previous year. It’s not just superstition, either. Every racket, each of which Borg and Bergelin examine thoroughly, has to be just right. His hotel room has to be a certain cool temperature and his pulse at just the right rate.

McEnroe is so on the edge, simmering with energy ready to explode, that virtually no one likes him. He largely stays in his hotel room focusing on the Wimbledon draw. He dines alone. But he does go out to clubs (usually with Vitas Gerulaitis) to release the heat building inside him. (It’s also implied that he enjoys the anonymity of not being a star in Europe.) Ultimately, however, making friends is only an obstacle to winning. And even if he wants to be admired, he’ll earn it through being the best in his sport.

But McEnroe’s biggest admirer is on the opposite side of the court during the 1980 Wimbledon final. And vice versa. The idea that McEnroe might idolize anyone seems surprising, but he held Borg in high regard. That might be best demonstrated in how he conducts himself during their match. Ultimately, the best show of respect the two can show each other — and to tennis — is to go at each other as hard as possible. (What’s truly stunning is how young both players were at the time, in their early- to mid-20s.)

As the story builds to that fateful match, so does some dread for the viewer (at least those who are discerning sports fans). Is the tennis going to be any good. Will these actors look like they can play or will their performance be cringe-worthy as it was in last year’s Battle of the Sexes? This might be the film’s greatest relief. Gudnason and LeBeouf emulate their characters’ individual styles well. The action on the court is legitimately exciting. Sure, close-ups and quick cuts help, but the two look like they’re playing elite tennis out there, not just pretending to do so.

This is Borg vs. McEnroe is Borg’s movie more than McEnroe’s, which is probably why this didn’t get a bigger theatrical release in the U.S. But that feels entirely appropriate because so much less is known about him. McEnroe is an open book, a volcano that erupted. The film might make you feel like finding their original 1980 match (or maybe even their 1981 rematch) and watching the real thing to see if the movie measures up. Maybe you’ll feel like finding articles written about the two competitors at the time.

But I don’t think that’s an indication that the movie doesn’t provide enough. It compels you to find more because the story is so intriguing. That can’t be a bad thing, especially for a sports movie.