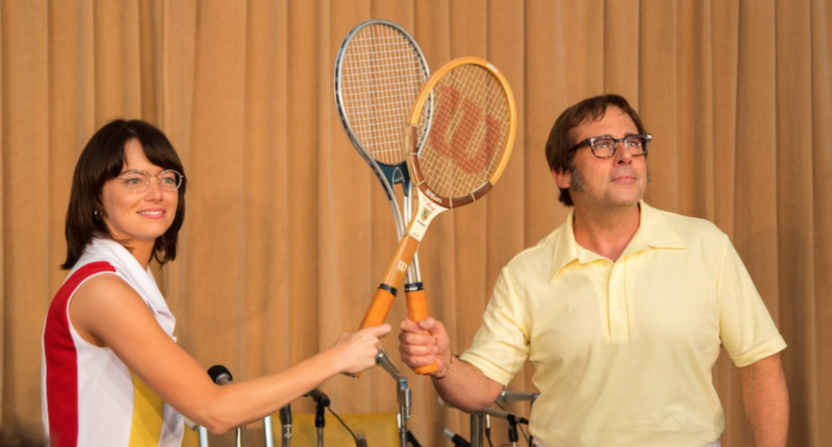 The “Battle of the Sexes” 1973 tennis match between Billie Jean King and Bobby Riggs would appear to be strong material for a movie. The event was a cultural phenomenon at the time, earning a national TV showcase (during an era when three networks dominated) and highlighting the gender equality issues that were prevalent in society.

King was a sports figure who had transcended tennis to become a national celebrity. Her athletic success had made her a role model to women young and old, and she used that higher profile to fight for women’s equality, both on the tennis court and in the culture at large. King’s career and life could fill up an entire movie on their own, but Battle of the Sexes comes pretty close to summing up how revolutionary and extraordinary she was.

As you might expect, and appropriately so, King is the focus of the film as the narrative builds to the climactic confrontation with Riggs. The story begins with a montage that familiarizes the audience with King (Emma Stone) and her accomplishments, leading into a scene where the tennis star and her agent, Gladys Heldman (Sarah Silverman), confront Jack Kramer (Bill Pullman), chief promoter of the professional tennis tour, over the massive disparity in purse money between the men’s and women’s winners for an upcoming event.

Whether or not King realized the sort of power she had, this is the first instance in which she decides to exercise it. With Kramer refusing to budge on rewarding the male and female players equal prizes (claiming it’s not in the budget), King says that she and the rest of the women’s players will boycott the tournament. Instead, they’ll appear at a different event played at the same time.

Furthermore, the women will start their own tour, which costs them membership in the U.S. Lawn Tennis Association (presumably meaning they can’t compete in Grand Slam events). Eight other players, including Rosie Casals (Natalie Morales), join King, signing symbolic $1 contracts as a sign of support and a rebuke to the tennis establishment. But Heldman eventually gets them sponsorship from Virginia Slims, so the players won’t suffer a great financial loss to make a statement.

The Women’s Tennis Association created by King is a success, attracting fans throughout the country and showing the tennis establishment that female players were a viable draw. As the face of the tour, King becomes an even bigger star as a result, a media sensation who regularly gets coverage on local and national news. Her ascendance gets the attention of Bobby Riggs (Steve Carell), a former World No. 1 player who won Wimbledon, the U.S. Open and French Open, but is relegated to working a corporate desk job for his father-in-law in his middle age.

However, Riggs is a compulsive gambler who can’t settle for a comfortable desk job and home life with his wife (Elisabeth Shue) and son. He goes out at night to gamble with his country club friends, often using his tennis skills to make big bets in what amounts to underground matches. (In one scene, he plays against someone while holding two sheep on a leash with two folding chairs placed on the court as obstacles. Winning that match earns him his buddy’s Rolls Royce, along with big cash.)

But King’s successful break from the tennis establishment and her skyrocketing celebrity profile are the subject of chatter among Riggs and his friends. Boasting that he could defeat her, even at the age of 55, inspires him to challenge King to a match, hoping the spectacle would draw enough attention to generate big sponsorship and offer suitable prize money. Riggs relishes the opportunity this presents to make him a celebrity again and earn enough money to feed his gambling habit (and never have to work behind that desk again).

Seeing Riggs’s proposed match as the circus that it is, King refuses to play him. But King is already dealing with a significant distraction off the court that is affecting her game. Before the press conference which announces the women’s tennis tour, King meets hairdresser Marilyn Barnett (Andrea Riseborough), who gives her the sort of attention (and appreciation for her beauty) that she’s never received from another woman before.

That awakens latent feelings in King, which she has always presumably suppressed, if for no other reason than it was the 1970s and homosexuality was heavily frowned upon. King was already married at the time, and her husband Larry (Austin Stowell) was deeply devoted to her tennis career, understanding how focused she was on her game and what she needed most to excel.

Marilyn becomes a massive distraction to King, allowing her to indulge in a side of herself that she’s never acknowledged before. Though the movie doesn’t say so, it’s well established that King has a maverick streak in her and enjoys going against conventional wisdom. The feelings for Marilyn are genuine, but perhaps the relationship feeds into King’s impulse to break free from the way things have always been done.

Yet the clandestine affair also takes away from the focus and preparation that made her such a dominant athlete. The guilt she feels over betraying her husband, and the anxiety caused by worrying that her parents will find out — not to mention that a lesbian relationship wouldn’t be accepted by fellow players, media, sponsors or fans — weighs on her heavily and it eventually costs her in an important match against rival Margaret Court (Jessica McNamee), who defeats King and takes her No. 1 ranking.

That opens up an opportunity for Riggs, who can challenge Court as the No. 1 women’s tennis player for his envisioned spectacle. Court accepts his offer, perhaps because it provides a showcase and financial reward that isn’t available on the professional tennis tour. The idea of taking something that King didn’t want appeals to her as well. Riggs ends up defeating Court in straight sets, seemingly adding affirmation to the notion that male tennis players are better (along with men being superior to women in general).

That motivates King to finally accept Riggs’ challenge, and with her higher profile, the “Battle of the Sexes” becomes a much bigger event, attracting bigger prize money, more media attention, and a national primetime TV showcase on ABC, called by Howard Cosell.

From there, the story follows more of a traditional sports movie narrative, presenting the contrast between the two players. Riggs takes every promotional opportunity thrown his way and doesn’t take his training seriously, figuring he can beat King, since he beat Court. King, meanwhile, trains hard, putting in long hours running and practicing on the court. Not only is this an opportunity to redeem herself as a tennis player, but it’s a chance to make a grand statement for women’s equality.

Unfortunately, one of the great failings of this movie is in its depiction of the climactic match itself. The tennis sequences are mediocre at best, looking more like an amateur match you might see at a tennis club or a park. It’s almost embarrassing how slowly the action is portrayed. There’s none of the energy and excitement you would see from tennis played at a high level.

Directors Valerie Faris and Jonathan Dayton (Little Miss Sunshine) don’t even shoot the players well in close-up during competition, relying instead on the breaks between sets to show what King and Riggs are feeling and thinking. It would have been a far better decision to rely on archival footage from the actual match. Maybe the old TV footage no longer holds up or might have been too expensive to acquire. Whatever the reason, it’s a big creative misstep, one that undercuts what should be the most exciting, compelling part of the movie.

As a Billie Jean King biopic, Battle of the Sexes serves its subject pretty well. Stone does a fine job of portraying King’s single-minded determination and counter-culture tendencies, in addition to the more vulnerable moments she experiences off the court. But the pacing feels inconsistent throughout, especially when focusing on King’s affair with Marilyn. It was certainly an important part of the story and King’s life at the time, but many of those scenes really slow down the film.

Yet Faris and Dayton still feel like they’re telling the story from a distance, rather than really getting up close with the characters and making them more relatable and engaging. Maybe it’s because they (along with screenwriter Simon Beaufoy) don’t quite know where to focus or what the story truly is. That’s somewhat understandable, because Riggs has to be a viable character in the movie to be the supposed villain of the piece. (Maybe Pullman’s Kramer is the real bad guy.) Ultimately, he’s a sad clown, one who’s not nearly as interesting as King.

Maybe King will get a better movie someday. Or perhaps one of the other movies in development about “Battle of the Sexes” will have a more interesting take on the story. Hopefully, they do a better job filming the tennis scenes, even if it’s the people involved about whom we should care the most.