Once upon a time, being in the booth on NFL Monday Night Football was one of the most sought-after jobs in all of sports media. Nowadays? It’s more like an erratic game of hot potato.

ESPN has played musical chairs with the booth over the past five years, failing to find suitable replacements for Mike Tirico at play-by-play (left in 2016) and Jon Gruden (goner by 2018) at color commentary. Since the two’s departure, ESPN has thrust eight different commentators — three on play-by-play and another five at color — into its biggest football game package.

The current trio of Steve Levy, Brian Griese, and Louis Riddick aren’t bad by any means, but one can’t help but feel they’re just keeping the seat warm for somebody else in 2021. Who, though? Well, we have a few big-names in mind that make sense. 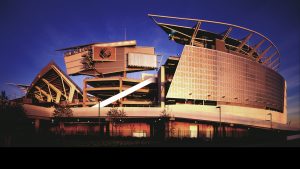 Rumors have been swirling for years now, but the chatter has only grown louder. If you believe in the phrase, “where there’s smoke, there’s fire” then there HAS to be some truth that the College Gameday crew could potentially switch over to MNF.

From a chemistry standpoint, few do it better than Fowler and Herbstreet. Ultimately, a buddy-buddy relationship is what makes any great commentating duo work and these two certainly have it in spades. The two even called a MNF matchup earlier this season — it was a double-header, with the main crew announcing the other — and shined in the position.

Of course, the only question is whether ESPN is willing to “cannibalize” its college football product. The Gameday crew is perhaps the best in the business, which brings up the classic saying, “if it’s not broke, don’t fix it.” But make no mistake about it, the NFL is THE priority at ESPN, more so than college football. That’s evident by the $1.9 billion it annually shells out to broadcast the Monday game.

Look, ESPN is looking for pizazz with its next hire, as in a former NFL player or coach that’s recognized at-large by the viewing audience. Hall of Famer quarterback Kurt Warner fits that bill and more.

Previously, ESPN has gone after player’s with similar pedigrees as Warner. The network has swung and struck out with Peyton Manning, Tony Romo, and Drew Brees before. Perhaps Warner isn’t near any of the three in terms of pure stardom, but he doesn’t lag far behind.

But here’s the thing: Warner is already good at this broadcasting thing. We saw Jason Witten struggle in the MNF booth role in his first year in media, but Warner is a seasoned veteran as a long-time analyst for the NFL Network. Warner can realistically slide into a color commentator position and not miss a beat for ESPN. 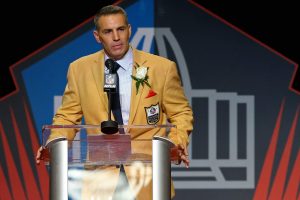 For years, ESPN has courted Eli’s older brother, Peyton, for the MNF gig. And every single time, Peyton has said no. ESPN will surely try again and per usual, Peyton will stick them up. But this might be the year ESPN “settles” for little brother, Eli.

Like Warner, Eli is a household name with the conventional sports fan, actually more so than Warner. That’s what bringing two Super Bowls to New York City does for a career.

While Eli doesn’t have broadcasting experience, his naturally goofy personality would be unique in the booth. Few other modern-day commentators speak with a southern accent like Eli, which is not to make generalizations, but would appeal to a lot of football viewers in the “Bible Belt” states.

This one is a curveball, but it’s not out of the realm of possibility (albeit a low one). First of all, Kimes is flat-out good at what she does — providing insight and making jokes in the process. She’s a regular on a barrage of ESPN shows and even commented on an NFL preseason game before.

Now let’s address the elephant in the room: she’s a woman. Beth Mowins made history in 2017 as the first female to call a MNF contest for ESPN. Well, Kimes is the next incarnation of that. Her wit and charm would make her a suitable partner in the booth.