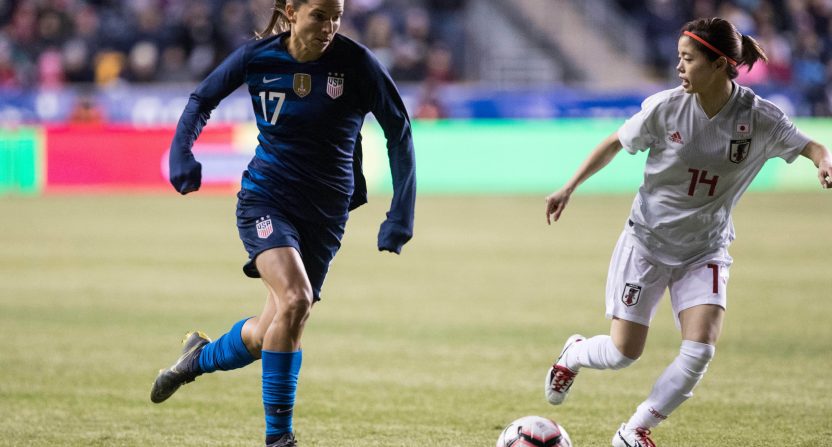 When the United States women’s national team takes the field this afternoon against England as part of the SheBelieves Cup, the names on the back of the jerseys will have more meaning than normal.

That’s because the players will be wearing names of women who inspired them in some way. Via U.S. Soccer:

Each member of the U.S. WNT selected the name of a woman who has inspired them and will wear that name on the back of their jersey. The choices ranged from activists to Nobel Prize winners, to artists, athletes and trailblazers, from historic to contemporary, and features women who hail from diverse backgrounds and champion a variety of causes.

The women chosen by the players come from a variety of places throughout culture and history, from Ruth Bader Ginsburg to Malala to Sojourner Truth. But there are also a few familiar women from sports media who will be honored today, all of them deserving.

“For me personally, it was hard to try to pick someone. My role models growing up had always been male footballers or just men – most of the greatest have always been men. So, that’s why this whole thing is so cool, because we’re trying to change that and show that some of the greatest are women as well, even though there still aren’t enough of them. Doris… she’s just the bomb.

It’s been a long process for her and she’s obviously been the first in many things she’s done in terms of broadcasting. I love the NBA and basketball is my second favorite sport to watch, and I just feel the respect that she’s been able to earn through the process, not only from the people in her field but also from the guys on the court who know the game in and out. So, to have them respect her so much is just the greatest honor. It’s like them saying ‘you’re one of us,’ and she’s totally earned that.”

“I picked Jess Mendoza because I really admire her breaking boundaries in sports. When I was in school, I got to hear her speak about persevering through challenges and people doubting her and I think that was really helpful for me to help me believe in myself.”

“I picked Robin because she spoke at a basketball camp I was at when I was probably 13 or 14, me and my sister were there – we were the only girls in camp – and she made an impact on me. We used to watch her on SportsCenter every morning with Stuart Scott, so we were excited to hear what she had to say. Since then, going through her whole story, she’s battled cancer and started the ‘make your mess’ message. I watch GMA every morning. It’s part of my routine.”

This is a really great way to allow players to honor the spirit of the SheBelieves Cup in a more personal fashion, and it’s definitely good to see so many women from the world of sports media having this kind of impact on the sort of athletes who inspire so many people themselves.