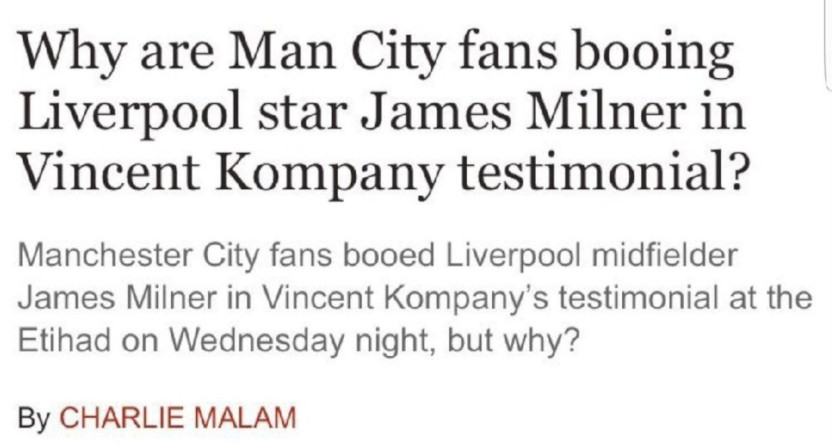 One of the most amazing media corrections in some time comes from London tabloid The Daily Express. On Wednesday, the paper published an astounding correction to an article from nine months ago on James Milner being booed during a testimonial match for Vincent Kompany, admitting that the whole premise of the article was wrong and that it was written before the match in question.

In fact, the article had been written before the game took place and was published in error. James Milner did not play in this match and was therefore not booed.

This wording has been published following an upheld ruling by the Independent Press Standards Organisation.

IPSO have advised that this only needs to be published on the corrections page.

This coming as the result of an upheld (so appealed) ruling from an outside body like the IPSO explains why the correction happened so much later (the piece in question was taken down before this), but it’s still astounding that this was published in the first place when the event in question didn’t happen. And that was pointed out by many at the time, as this Reddit thread details:

For the record, Malam, whose Twitter bio lists him as Deputy Online Sport News Editor @ExpressSport, has not tweeted since April 4, so he has not personally commented on this correction. Here is the full IPSO ruling, with some more details:

3. The complainant said that the article was inaccurate in breach of Clause 1 (Accuracy) as Mr Milner did not play at Mr Kompany’s testimonial and it was therefore impossible that he had been booed by fans. She also noted that the match was a testimonial, rather than a competitive match, which had a large impact on whether he would be jeered as it was for charity.

4. The publication did not accept that Clause 1 of the Code had been breached, though it accepted that the article was inaccurate. The article had been prewritten, based on previous games in which Mr Milner had been booed by Manchester City fans. In addition, the publication had relied on social media claims that Mr Milner had received abuse after leaving the team bus. The article had then been accidentally published. The publication had taken steps in order to stop this mistake from reoccurring, by sending a formal email to the journalist in question and a general email to the team to make them aware of the issue and to stop it from happening again. The article had been removed shortly after publication and the following correction was published after the complaint was referred by IPSO.

This is not the first time a publication or an author has gotten in trouble over a detail in a pre-written piece that turned out to not actually happen. A famous case of this comes from Mitch Albom in 2005, when he was suspended along with four editors at The Detroit Free Press over a DFP piece that described two former Michigan State players in the crowd at a NCAA Final Four game. (The players told Albom they’d attend, but didn’t actually do so, and he filed his piece as if they had done so.)

But the Express piece is notable on a few fronts; the whole basis of the piece is wrong and didn’t actually happen (which raises questions of why they wrote it and why they were so sure that the fan reaction in question would happen), and it took them nine months and a journalistic standards body’s ruling to issue a formal correction for it. And while the Express didn’t have a great reputation in the first place, this certainly isn’t going to bolster it.