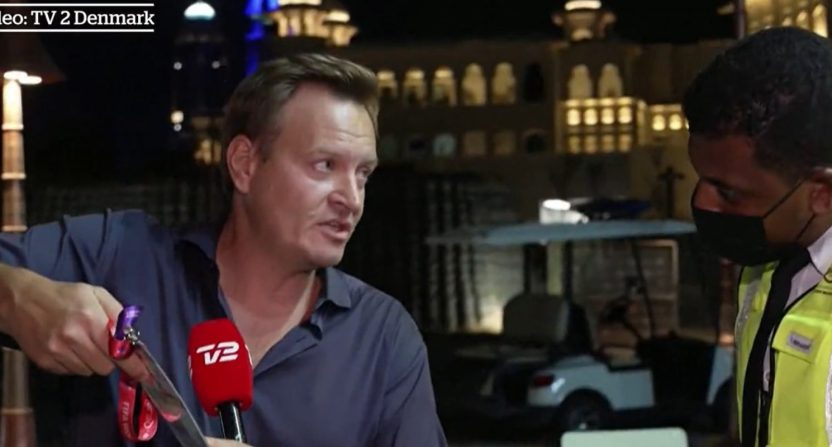 Danish reporter Rasmus Tantholdt was broadcasting live for Denmark’s TV2 in the Qatari capital of Doha ahead of the World Cup when the film crew was approached and threatened by Qatar security live on-air.

Video of the incident shows Tantholdt live on-air when a golf cart pulls up and officials quickly approached the camera to end the broadcast. Tantholdt protested the officials and displayed his credentials before he accused them of threatening to break the camera crew’s equipment.

WATCH: Private security guards in Qatar forced a Danish reporter off the air as he reported live from the World Cup ⬇️ pic.twitter.com/tUV1y8CmHI

“You invited the whole world to come here, why can’t we film? It’s a public place,” Tantholdt said in English. “You can break the camera, you want to break it? You are threatening us by smashing the camera?”

“Upon inspection of the crew’s valid tournament accreditation and filming permit, an apology was made to the broadcaster by on-site security before the crew resumed their activity,” the Supreme Committee for Delivery & Legacy acknowledged in a statement. “Tournament organizers have since spoken to the journalist and issued an advisory to all entities to respect the filming permits in place for the tournament.”

In addition to the Danish reporter’s harrowing experience, Grant Wahl shared details of his own run-in with Qatari officials ahead of the World Cup. Wahl, who has covered the US Men’s National Team for more than two decades also experienced an example of media oppression in Qatar, which he wrote about on his substack page.

While visiting the FIFA Broadcast & Media Accreditation Centre to pick up his World Cup credential, Wahl said he used his cell phone to take a photo of a slogan on the wall.

“Within seconds, a security guard walked over. ‘Picture is not allowed, sir,’” Wahl recalled, noting there were no signs prohibiting photography. According to Wahl, the security guard told him to “kindly delete it, sir.”

FIFA awarded the 2022 World Cup to Qatar in 2009 and the decision has been marred by controversy in the years since. In addition to being deemed a “high risk” place to host the World Cup along with Qatar’s appalling labor abuses and human rights issues, there have been several allegations of bribery between the country’s bid committee and FIFA executives. Considering those allegations and concerns, Qatar’s treatment of visitors and media will rightfully be under heightened scrutiny.

The World Cup kicks off this Sunday as Qatar is scheduled to face Ecuador in the tournament opener.