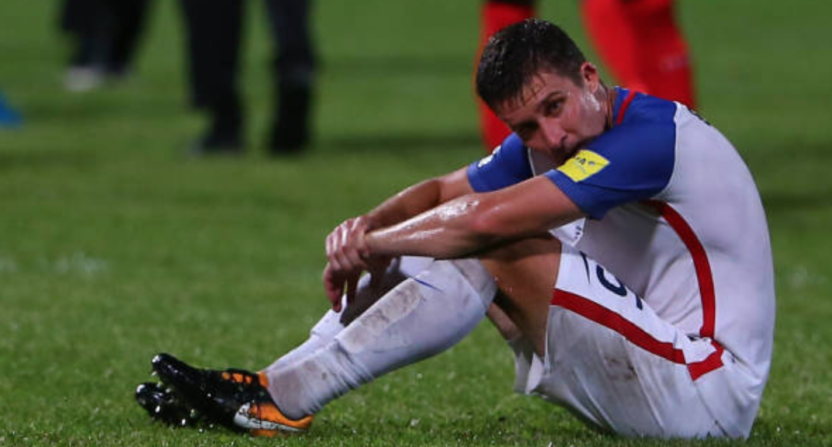 Fox Sports swiped the World Cup rights from ESPN in 2011. It looked like a major coup. ESPN wanted it. Soccer seemed to be a fast-growing sport and television product with critical demographics (young people, Hispanic people). Things improved even more when FIFA handed Fox the rights to 2026 as a makegood for moving the 2022 World Cup to winter.

But now, months away from the tournament, Fox Sports attaining the World Cup rights looks like it could be a disaster, for the network and the sport. It has nothing to do with the “Fox stuff” soccer fans feared, such as trying to make Gus Johnson happen or trolling viewers with Piers Morgan and Bruce Arena way too soon.

The USMNT screwing up qualifying was a significant blow. Those matches are why you get the World Cup. The USMNT drew three to four times the audience for an average World Cup match for ESPN in 2014. USA-Portugal attracted more viewers than the World Cup Final. Imagine ESPN’s bowl season, but you change out the two college football playoff semifinals and the Rose Bowl for three more iterations of the Texas Bowl. Not having the Americans is massive.

Qualification outside CONCACAF did not help. Argentina made it in the final round. Messi will play. But Italy and Ireland – two countries with strong followings in the U.S. – won’t be there. The Netherlands and two-time reigning Copa America champs Chile miss out as well. Group play eliminated three prominent African countries – Ghana, Ivory Coast, Algeria – with recent World Cup history. Smaller teams have replaced powerhouses. A possible group for Fox could be Russia, Peru, Senegal, and Saudi Arabia. Feel the excitement.

The time zone differential compounds the problem. It is far from ideal for U.S. viewers. Matches will kick off at 7 AM ET most days. One begins at 5 AM ET. The final will be at 10 AM ET. Watching this tournament will be a grind and almost impossible for people with 9-to-5 jobs. Fox Sports will be thankful that Russia abandoned Daylight Savings Time in 2014. The matches could have started an hour earlier.

Russia, it should be noted, is the good World Cup from the 2018/2022 pair. Qatar offers the same time zone challenge as Russia. Moving the World Cup to November/December is great for the players who won’t be subbed off in the 64th minute with heatstroke. It’s not good for Fox Sports. Instead of great ratings during a normal lull, that tournament will compete for attention, coverage, and advertisers with the NFL, college football, the NBA, and the NHL happening concurrently.

Fox Sports did get the 2026 World Cup without bidding. That could be quite fortuitous as the U.S./Canada/Mexico bid should be an overwhelming favorite to land that tournament. Of course, that World Cup could prove a disaster with the format change. FIFA expanded it to 48 teams. That means 16 groups of three teams. That means 16 final group matches in which the two participants know the exact result needed for both to advance. A lousy opening result could all but eliminate the U.S.

With television changing, it’s not clear how valuable the World Cup will be. Tournaments like that and the Olympics are great at drawing a casual audience for one month every two to four years. But that casual audience is cable subscribers who are diminishing by the millions. If your revenue is coming from a streaming service, it’s much better to have the EPL running August to May every year than a one-off competition.

How valuable will the World Cup be for Fox? Presumably, Fox planned to drive that World Cup audience into its other soccer properties. Since 2011, NBC Sports locked down the Premier League rights. Fox Sports just lost the Champions League to Turner. Fox is left with the Bundesliga and a shared MLS deal. The tournament should be rife with promos for mediocre Big Ten football games.

More important may be the question of what this means for soccer moving forward. We are looking at the prospect of consecutive underwhelming World Cups and the USMNT not playing a meaningful match for more than a year.

Ten years ago in the U.S., soccer was something you watched on a niche network and discussed on weird message boards. SportsCenter anchors giggled through the occasional highlight, mispronouncing foreign names. MLS teams could not even get shirt sponsors. The sport has grown. But the unanswered question is how much of that was due to active ESPN promotion. Consult the NHL over the past 13 years for what happens when that spigot stops.

Christian Pulisic may be the long-awaited Maradona/Ronaldo/Messi of American soccer’s dreams. But, there’s a danger few Americans will have a reason to watch him.