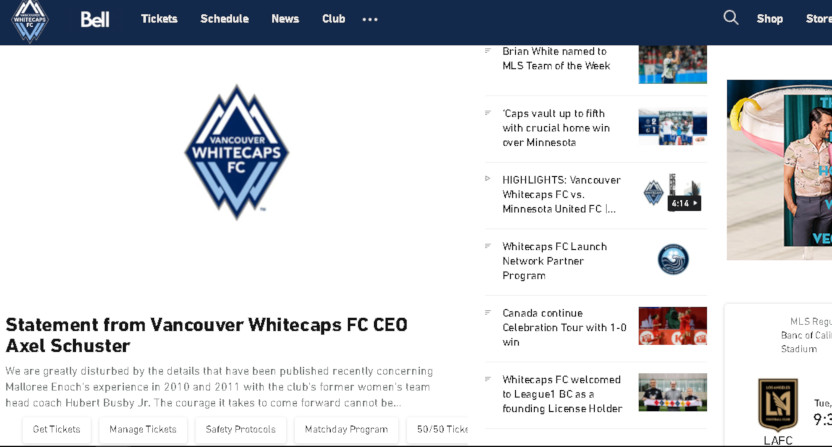 The fallout from the release of the law firm report on the Chicago Blackhawks’ handling of 2010 sexual assault allegations against video coach Brad Aldrich has seen consequences for NHL GMs and coaches, and may yet see consequences for other executives. That’s also ramped up pressure on other sexual assault and sexual harassment investigations, including adding to the case for the NFL to release the report they commissioned on the Washington Football Team. And in soccer, the latest thing that’s led to is an intensified focus on MLS’ Vancouver Whitecaps.

The Whitecaps have been under fire for the last few years for the actions of former women’s team coach Bob Birarda, also a former Canadian national women’s soccer figure. Former players, particularly Ciara McCormick, had been raising issues about Birarda for years, and he was eventually charged with sexual exploitation, sexual assault and child luring last December. He’s finally set to go to trial on those charges later this year. And the Canadian national women’s team got their federation to agree to meet their demands and take a stand against a “culture of abuse” earlier this week, as part of the conditions under which they would play a celebratory tour around the Olympic gold medals they won this summer. But the Whitecaps got an extra blast this week with discussion of allegations against another former women’s team coach, Hubert Busby Jr. (currently the coach of Jamaica’s national women’s team). Here’s more on that from a piece by Matthew Hall published Thursday in The Guardian:

The detailed claims against Hubert Busby Jr date to his time as head coach of the Vancouver Whitecaps women’s team in 2010 and 2011 and include alleged sexual advances toward a player he was attempting to recruit. Busby denies the allegations. The Whitecaps also operate a men’s team in Major League Soccer and are considered a soccer powerhouse in Canada.

The allegations center on the recruitment of Malloree Enoch. She told the Guardian she initially contacted Busby in September 2010 seeking an administrative job with the Whitecaps women’s team. Enoch says Busby suggested she could play for the Whitecaps rather than work in team management.

That invitation triggered a series of incidents during a recruitment process that, according to Enoch, saw the coach give her Adidas sports equipment as gifts, fly her across the country on multiple occasions to attend events with him, take her to restaurants for meals in one-on-one situations, and ask her to stay with him alone in his hotel room while working in his role as the Whitecaps’ coach.

That piece is worth a read in full for all the details of Enoch’s complaints against Busby. But what’s also interesting in that situation is the response of the Whitecaps’ organization, which seems to carry a lot of parallels to the inaction the Blackhawks have been blasted for. Martin MacMahon of Canadian outlet CityNews (a national network of several local TV stations) had more on that in a piece published Friday. Here’s part of that, a tweet that McMahon shared of a letter sent by Dan Lenarduzzi (the team’s soccer development director at that time, and the brother of president Bob Lenarduzzi) in October 2011:

In addition to the claims being levelled against Busby Jr., Enoch says the team essentially tried to muzzle the players.

“They threatened us to not go public, and they threatened us not to speak about it on social media, and that it was unprofessional,” she said, claiming the players were told to keep quiet in a letter from Dan Lenarduzzi, who was part of the leadership team at the time.

“For us, we all were angry about it, because it just meant that they weren’t really doing anything about it.”

This has, understandably, prompted a lot of outrage. And, interestingly, it led to MLS announcing its own investigation Friday night:

On some levels, yes, this isn’t entirely MLS’ purview. The Birarda accusations came from 2008, before the Whitecaps officially were in MLS (they began MLS play in March 2011, although they were announced as a MLS expansion team back in March 2009), and they related to the club’s women’s team, which was not really part of its MLS side. The Busby accusations come from while the Whitecaps were in MLS, but again, they were about the women’s team rather than the MLS team.

But there’s a strong argument that MLS should care about this. All of this behavior came at a time when the Whitecaps were using their admission to MLS as a boost of their status, including with their women’s team. And some of the figures here like Dan Lenarduzzi held roles on the men’s side as well as the women’s side. And moreover, this is a moment in sports where a whole lot of leagues and teams are having to look at their reporting procedures. And that’s certainly the case in soccer, and maybe especially in women’s soccer, with the aforementioned push from the Canadian national team and with the recent discussions about the poor handling of allegations of sexual coercion in the NWSL. Also, here’s the statement the Whitecaps put out:

The key thing to keep in mind with the MLS investigation here is that this isn’t necessarily about punishing current personnel. Most of the figures specifically named thus far no longer have roles with the Whitecaps. But this is still an important investigation in terms of analyzing the Whitecaps’ processes at that time, and looking at their current processes, and eventually making it so players and staff truly can “work in a safe environment, free of all forms of harassment and fear of retaliation.”

And MLS deserves some credit for a. launching an investigation here, even though some of what’s at issue is things that weren’t completely under their umbrella, and b., committing to release a full report publicly. And some of that could be applied by other teams and leagues. The current reckoning here is not just about exacting retribution for past screwups. It’s also about ensuring that things get better moving forward. And hopefully this investigation can play a role in that.

Update: MLS has named the firm they’ve hired to investigate this, and stated that this will cover a timeline stretching back to Birarda as well, even though that precedes the Whitecaps’ official entrance into MLS and even their announcement as a MLS expansion team. There is also an email address provided in that tweet for anyone looking to reach out to investigators on a confidential basis: whitecaps@rubinthomlinson.com.