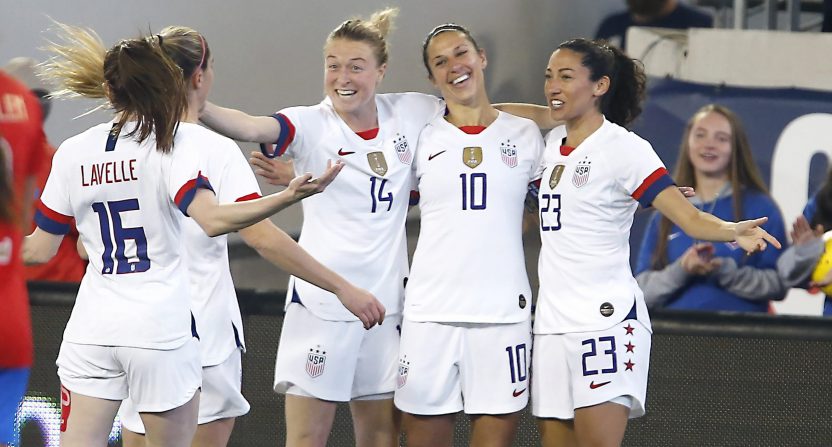 On Monday, Concacaf finally reached an American broadcasting deal for men’s and women’s Olympic qualification matches, among a group of other properties.Fox was awarded the rights, and while the men’s Olympics are a U-23 event, the women’s qualification will feature the full USWNT. Unfortunately, those matches were set to begin the next day (the US beat Haiti 4-1), and as we noted on Monday, that meant programming conflicts kept Fox from putting the USWNT matches on FS1.

Here’s the schedule for the USWNT, per Fox’s release (all times Eastern).

In a perfect world, Fox would be airing the whole tournament on FS1, but because of how late a deal got done, the network had plenty of programming conflicts, namely both men’s and women’s college basketball.

Fox announced today that tonight’s match against Panama will also be shown on FS1, but that it will be joined in progress after the conclusion of the Baylor-Texas women’s basketball game.https://twitter.com/FOXSportsPR/status/1223244581162102791As Fox noted, the game will still be carried on Fox Soccer Plus as originally planned as well, along with being streamed online (though FS1 subscriber authentication would be required.)https://twitter.com/FOXSportsPR/status/1223264663489732610It’s not a perfect situation, obviously, but considering the scheduling timeline here and their other obligations, it’s hard to see what else could have been done. It’s not Fox’s fault that Concacaf apparently dragged their feet right down to the wire.[Fox Sports]