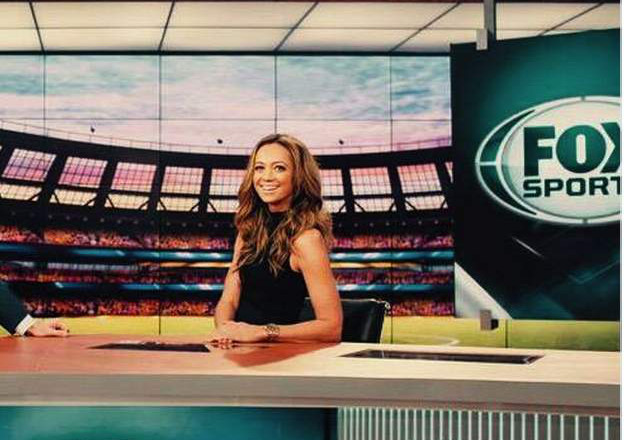 On one level, Fox’s hiring of Kate Abdo as a soccer studio host seems like a relatively big deal. Abdo did a solid job as a guest host during the network’s FIFA Women’s World Cup coverage in 2015, and she’s well-known for her work with Sky Sports, Sky Deutschland and CNN. However, days after Fox colleague Rob Stone tweeted about the move, Fox’s press portal still doesn’t have a release on her hiring. Here’s Stone’s tweet from Wednesday announcing the news:

FOX Sports has hired Kate Abdo as studio presenter for its soccer coverage, a source has revealed to World Soccer Talk.

With the amount of soccer leagues and competitions that FOX Sports possesses the rights to in the United States, she’ll be one of three presenters who will work across their soccer properties. Fellow FOX Sports presenters Rob Stone and Ian Joy will continue to play important roles presenting soccer coverage.

…FOX Sports was reached for comment, but did not respond to our request.

Two days after that, crickets (although Fox does have an updated bio posted for her, one that says she “joins FOX Sports to serve as a studio host for the network’s extensive soccer coverage”). But Fox has sent out four releases in that time, including “FOX NASCAR Analysts React to News Edwards Will Not Compete Full-Time in 2017 Season,” “FOX Sports Teams with Intel for New Player’s-Eye View Of Super Bowl LI,” “FOX Sports Kicks Off its Third MLS Season with Historic Debuts for Expansion Atlanta and Minnesota” and “FOX Sports Names ‘Pick of the Litter’ for Presentation of 2017 Westminster Dog Show.” So, at least they have their priorities straight.

It’s unclear why there’s no release here. Yes, networks aren’t obligated to announce every move they make, but on-air talent moves like this (and especially ones of already-prominent people) usually are accompanied with a release. For comparison, Fox sent out releases for Kevin Harvick (broadcasting eight NASCAR races for them this year), Cris Carter (“a FS1 NFL analyst” and frequent embracer of debate) and even Rob Parker (“a contributor to SKIP AND SHANNON: UNDISPUTED”). It may be that Fox planned on officially announcing this later for some reason, but it’s unclear why they wouldn’t move that up once the news broke (and Stone’s comment that he was “finally” allowed to mention this, plus Abdo’s bio on the Fox site, certainly makes it feel that this is a done deal). In any case, it certainly seems curious that they’re not promoting this more, and that they didn’t return World Soccer Talk’s request for comment.

The Abdo move seems like a smart one for Fox. Soccer’s becoming more and more important to their brand as they build towards the 2018 World Cup, and their MLS, Bundesliga and international rights mean they have a lot of soccer content to televise. Abdo has impressed on the network before and definitely knows her soccer, and as Harris’ piece notes, she’s fluent in German, Spanish and French as well as English, certainly useful for covering such an international game. Her background working in Germany (first for DW-TV, then later for Sky Deutschland) gives her plenty of experience with the Bundesliga, too, and could help make her a good fit for hosting that coverage. This seems like a logical move for Fox, and a nice get for them; the only question is why they aren’t promoting it more, especially days after the news has already spread.