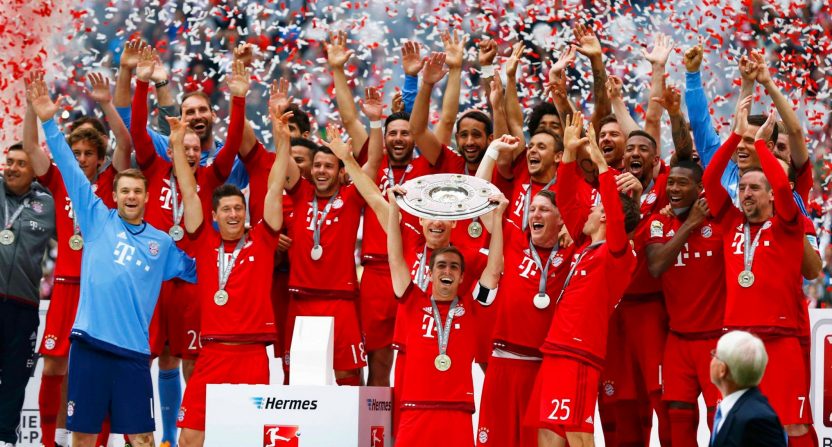 While the appetite for soccer is growing in America, the German Bundesliga is still looking for effective and impactful ways to increase its U.S. television audience and overall brand awareness as it looks to set down roots outside the traditional European market.

Awful Announcing was invited to a Bundesliga trip to Frankfurt organized for international journalists, where we spoke with Bundesliga league and individual team officials on how the league is trying to further establish and broaden its American presence.

The Bundesliga boasts the highest average attendance among all major European leagues, its games average the most goals and it claims to have the cheapest average ticket price, but U.S. television ratings for 2017 were quite disappointing, according to World Soccer Talk figures. Despite Bundesliga matches making up nearly a tenth of all U.S. televised matches last year, it averaged an embarrassing 59,460 viewers, well below its competitors.

Inside a hotel next to Eintracht Frankfurt’s Commerzbank Arena on Sunday afternoon, veteran broadcaster Derek Rae emceed the Bundesliga presentation prior to the German Supercup, where Bayern Munich steamrolled Eintracht Frankfurt 5-0 behind Robert Lewandowski’s hat trick. 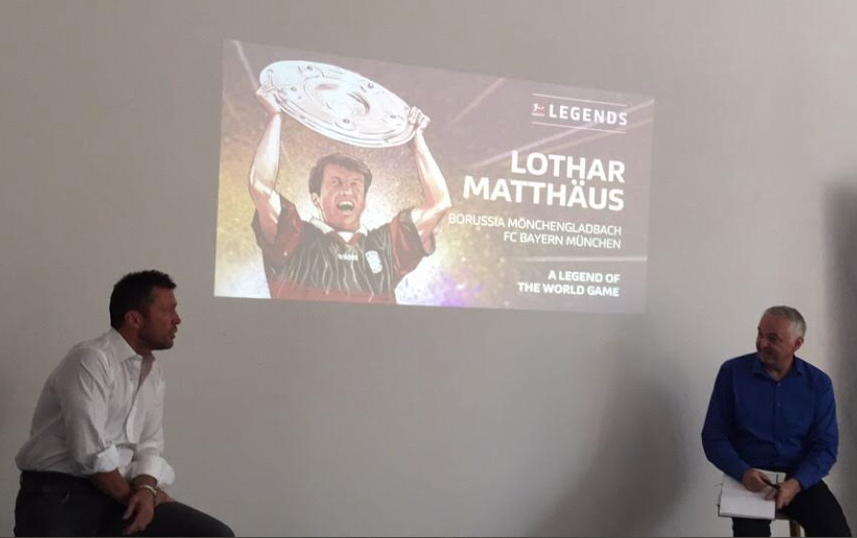 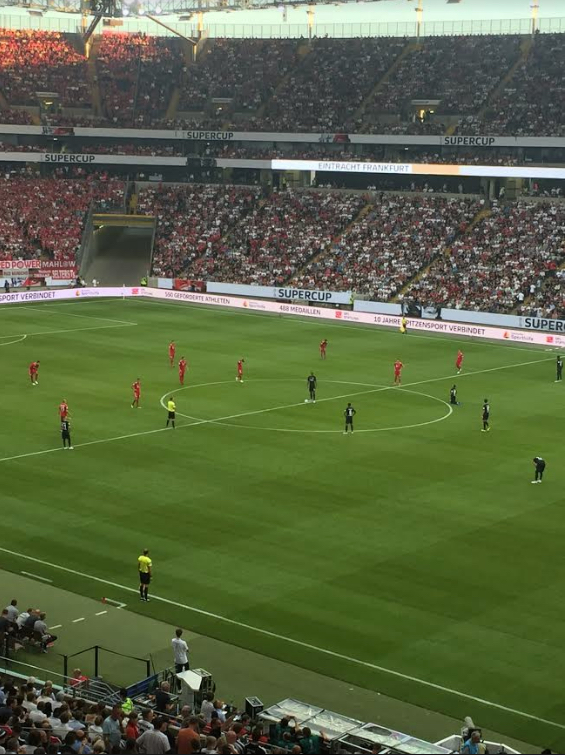 Robert Klein, the CEO of Bundesliga International, began to discuss the league’s overarching strategy for making inroads in the U.S. It starts with what Klein referred to as its business intelligence, figuring out where their fans are, exactly what they’re watching, what their consumption habits are and what other areas can be pursued and developed.

“We need the foundation so we really understand the markets and go about it in a structured way,” Klein said. “And then equally, when we’re talking to the digital players and we’re talking to our broadcasters, we need to be able to understand the market as well as them, and in some cases possibly better than them, so we can explain what we’re doing and why we’re doing it.”

Those digital players on the non-live and non-rights side are a major focus for Klein, who admitted that there’s a lot of work to be done “in terms of creating the right content accessible to other media partners and other broadcasters.” Among other ideas, one is a Bundesliga goal of the week video for FIFA players on various gaming consoles, emphasizing what Klein termed “short, snackable content.” One such video featuring Colombian striker and Bayern superstar James Rodriguez netted over eight million views, Klein said.

The Bundesliga has already taken steps to try to reach a larger U.S. audience based on the intelligence it’s already gathered, and will try to further that when it opens its first international office in New York City’s Union Square in mid-October. Klein said it’s already hired its first two senior staffers for its NYC location and five full-time employees will be based there, per a source.

“That will be all about maximizing our potential on the ground in the U.S.,” Klein told Awful Announcing, “and also looking at brand promotion partners, companies who are interested in working with the Bundesliga and the clubs to develop activities, promotions and access to new people.”

For Christian Seifert, the CEO of the Deutsche Fußball Liga, a Bundesliga board member and the vice president of the German Football Association, it’s about optimally delivering the content and product that fits best for each target group and fan base.

“In the U.S. you have 45 million people with German roots,” Seifert said. “We try to listen first, because those who know fans best in the U.S. are those companies and those newspapers and those who do business every day. We listen and then we try to provide a great product.”

The business strategy is far more than just trying to build on its meager U.S. television audience, and cultivate a more prominent presence beyond having Bayern Munich and Borussia Dortmund compete in the annual International Champions Cup.

An optimal scenario was laid out where Bayern would play a summer friendly in Seattle against the Sounders and work with Fox Sports and Bleacher Report to get the word out. Other clubs are already taking that approach. Eintracht Frankfurt has come to the U.S. the last two years to play friendlies in MLS cities and is trying to utilize multiple avenues to build its brand abroad.

For Frankfurt board member Axel Hellmann, U.S. tours are about “having targeted content elements in our communications strategy that are not automatically linked to our competition.”

Look for more Bundesliga teams to come stateside during the summer in coming years, with Klein focused on friendlies against South American clubs as well to expand awareness among America’s many Latin American fans.

Klein’s sights are set beyond just summer and ICC events— though Klein said he’s happy with the ICC focusing on what he called a global calendar— with different year-round Bundesliga events.

“It will be a combination of working closer with the clubs there, specifically with Bayern’s brand,” Klein said.

Bayern opened their first foreign office in NYC in 2014.

“When they arrived, they had eight fan clubs,” Klein said. “They have 138 today.”

With more than 25 million active players in the U.S. and a population of 80 million under the age of 18, setting up shop in America was a no-brainer according to Bayern executive board member Jörg Wacker.

“To get a stronger positioning of your brand” and to bring in more fans and revenue, Wacker said, the U.S. is now an essential soccer market.

As part of its emphasis on U.S. events outside of the summer, the Bundesliga plans on helping Bayern by planning outreach in Los Angeles around Oktoberfest. Munich plays its first Der Klassiker match of the season at Borussia Dortmund on Oct. 11, and Bayern will be out in force trying to spread the Bundesliga gospel in L.A.

“They will do their thing and they will show their game, they will do Oktoberfest,” Klein said. “But we can get involved. They’ve asked us to bring a legend, for example, and then you can maximize it.”

Another way Bayern is trying to maximize its U.S. and North American exposure is through a youth development partnership with FC Dallas, which began in February.

“We said, let’s try to start and individual exchange of coaches and let’s see if you have good players,” Wacker said.

A then-17-year-old defender named Chris Richards caught Bayern’s attention, and he was flown to Munich for a 10-day trial. “The two coaches said this is a good one,” Wacker said, and was signed on loan in July to their U-19 team and played for them in the ICC. And that’s not to mention 17-year-old Vancouver Whitecaps standout Alphonso Davies, who will join the team full time in January after a gigantic $20 million transfer agreement.

Bayern isn’t the only team with aspirations to mine local young American talent. Midfielder Weston McKennie, 19, came from the FC Dallas youth system and played 22 games with Schalke’s first team last season. Tyler Adams, another 19-year-old midfielder, is supposed to depart the New York Red Bulls and join sister club RB Leipzig after the MLS season. And of course there’s Christian Pulisic, also 19, starring for Borussia Dortmund after growing up in the American academy system.

Eintracht plans on opening a soccer academy in the fall of 2019 at Total Sports Park in the Detroit suburb of Washington. A former German national team player who lives in the area introduced the team to a company out there last November, “and we felt it was worth it to give it a chance,”  Markus Weidner, Frankfurt’s head of international relationships, told Awful Announcing. 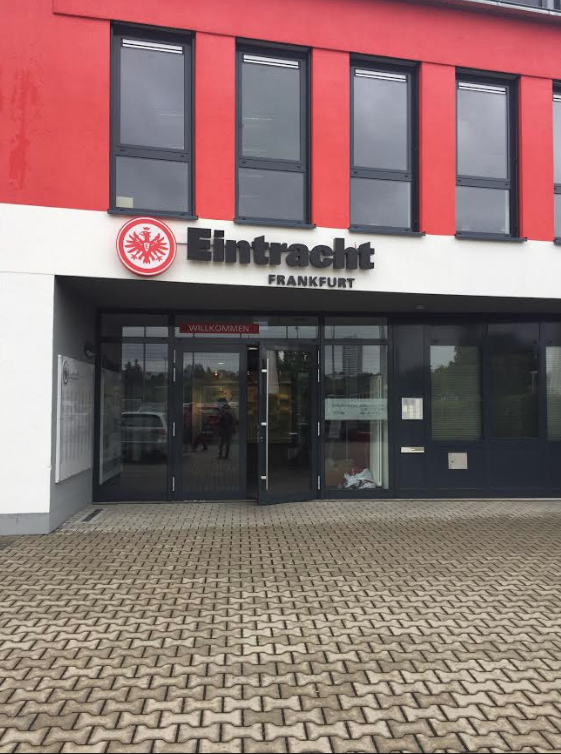 Eintracht’s ambitions in Michigan aren’t centered around finding the next Davies, McKennie or Richards, but to build brand awareness for the club and advance soccer in the U.S.

“If there’s a talent, we’re happy to take them,” Weidner said.

If all goes to plan, Eintracht will have four or five U.S. academies and associate soccer’s popular rise with the team’s presence in those areas.

For Klein, opening an office in New York enhances the Bundesliga’s ability to not only be closer to various businesses, sponsors and advertisers, but also to the home offices of the major American sports. Klein said the league will try to sit down with the NFL and NBA to see “where there’s a fit and implement a strategy.”

For starters, Klein wondered if there’s something they could build around Bundesliga fan and Dallas Mavericks legend Dirk Nowitzki, “developing content, access and interest to a wider fan base.”

With the new Bundesliga season beginning in a little over a week, the league will embark on its first year fully embracing its business intelligence strategy and doubling down on trying to further break into the robust U.S. market. Klein would like to see TV audiences double or triple, but progress will likely be slower than that.

The competition is stiff, but for the Bundesliga to rise up from the 6th biggest sporting league in the world, according to Seifert’s estimate, it’s going to have to do much better in the American market. For the Bundesliga, the tough work is just getting underway.