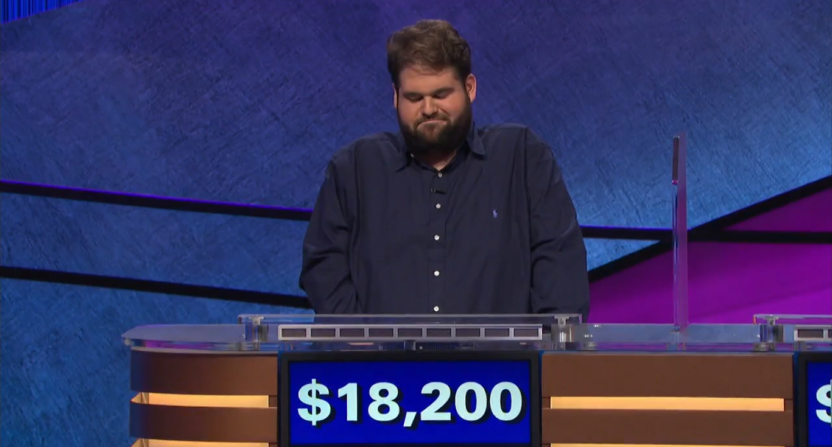 Having successfully won his first two games on Jeopardy! (and having racked up a fairly impressive total, as well), Sports Illustrated’s Jack Dickey played another very impressive game on tonight’s episode.

That included a big Daily Double in Double Jeopardy. With the category of Organizations, Dickey risked $3,000, and picked it up with the correct answer/question:

(The disdain for his own response was both palpable and hilarious.)

The Double Jeopardy round shook out such that Dickey was tied with Kristin Robbins at $18,200 heading into Final Jeopardy, with the category Films of the 1990s. Given the demographics of today’s contestants and the scoring situation, that was always going to guarantee some big wagers, and once I saw the clue, I thought we might end up with a tie game. (Not to spoil, but I did get it correct; but it’s a lot different at home than on stage.)

And then, when Kristin got it right but it was revealed she hadn’t risked everything, I thought Jack had a great shot to advance with a massive three-day total. But, unfortunately:

Still, a three-day total of $47,802 isn’t bad at all, and that was a hell of a final game, too. Well played to him, and to Kristin; her one-day total is a very big one indeed.