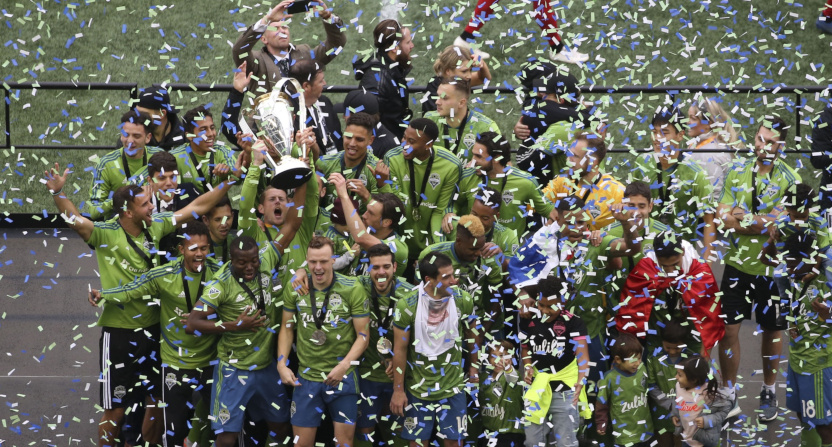 The ratings for Sunday’s U.S. broadcast of the 2019 MLS Cup (where the Seattle Sounders beat Toronto FC 3-1) on ABC are in, and while they’re up from previous broadcasts on ESPN cable channels, they’re not great relative to last year’s match on Fox. Here are the numbers from ESPN’s Bill Hofheimer:https://twitter.com/bhofheimer_espn/status/1194004149836435463Here’s more from the ESPN release Hofheimer cites there:

The ABC broadcast of Sunday’s 2019 MLS Cup Presented by Audi – a Seattle Sounders’ 3-1 victory over Toronto FC – averaged 823,000 viewers (P2+), according to Nielsen fast nationals, making it the most-watched MLS Cup match on the Disney Media Networks since 2014.Sunday’s audience is a three percent increase over the last MLS Cup on the Disney networks in 2017 (803,000 viewers on ESPN) and the company’s most-viewed Major League Soccer championship match since 2014 (964,000 on ESPN).…2019 MLS Cup caps a record-setting MLS Playoffs for the Disney Media Networks. Prior to Seattle-Toronto, the five ESPN/ESPN2 matches combined for a 36 percent audience increase, while the LAFC-LA Galaxy Western Conference semifinal on Oct. 24 delivered ESPN’s best MLS Cup Playoffs audience in five years. This year is also the most-watched MLS postseason on ESPN Deportes, which is up an impressive 235 percent.

For comparison, Fox’s broadcast of the 2018 MLS Cup drew 1.563 million viewers. Now, an important caveat there is that the 2018 game was almost a month later (Dec. 8), and that it was played at 7:30 p.m. Eastern on a Saturday. By contrast, this year’s match was at 3 p.m. Eastern on a Sunday, going head to head with NFL games. But that was probably the most logical slot for it, as the new shortened MLS playoff format and shortened regular season (thanks to more midweek matches) this year meant that the MLS Cup took place while there was still a whole lot of college football going on (eating up ESPN’s networks Saturday, including ABC).Last year’s game took place the same Saturday as the annual Army-Navy Game, but that was the most significant college football that day. And Army-Navy was on CBS rather than ESPN or Fox, and it was several hours before the MLS match. So the MLS Cup got primetime mostly to itself last year (and in previous years), and that’s really not possible under this year’s new schedule.

Another important caveat here is that unlike last year’s match, this match included only one U.S. local market. And we all saw how that worked out for the NBA earlier this year. Local ratings are usually a crucial part of national ratings (as Hofheimer noted, this one set a Seattle market record), and while there were probably quite a few Canadian viewers for this (although it’s notable that MLS also faced significant competition there from the CFL playoffs thanks to the month-earlier time), that doesn’t help with the U.S. numbers.But an interesting part of that is that this is the third Toronto-Seattle clash in four years; that matchup averaged 803,000 viewers on Saturday, Dec. 9 on ESPN in 2017 (at 4 p.m. Eastern), and 1.4 million viewers on Fox on Saturday, Dec. 10 in 2016 (at 8 p.m. Eastern). So, considering that the ESPN match in 2017 with these teams drew almost as many viewers for this matchup despite ESPN being in around 30-35 million households than a broadcast channel, and that the Fox match in 2016 with these teams wasn’t far from doubling this, the Saturday in December (without much college football) versus NFL Sunday in November element here seems like the most notable part of the drop here.And while the overall audience here isn’t terrible (the most viewers on a Disney network since 2014 isn’t nothing), a lot of that is from putting the game on broadcast rather than cable. From this year, at least, it seems that playing the MLS Cup in November rather than in December is going to lead to lower audiences, and a lot of that has to do with the greater college football competition in November. The schedule shift may still be worth it for the league if it benefits them in other areas (and there are a couple of big ones; their playoffs are no longer interrupted by a FIFA international break, and they’ll have their season conclude ahead of the planned Nov. 21, 2022 start of the World Cup in Qatar), but it seems like their TV numbers may not be as good as they were for the December games if all other factors are equal.