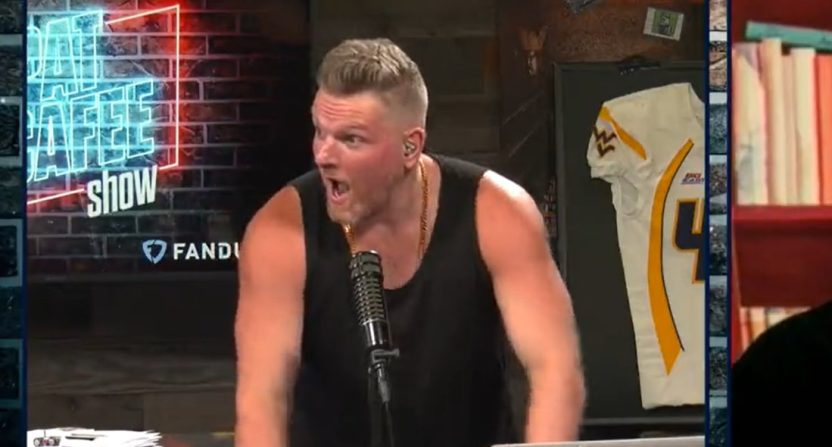 Pat McAfee is no stranger to having people say wild things on his radio show, with a specific shout out to Aaron Rodgers for that, so it takes a lot for the former NFL punter to be shocked on-air.

But an eight-year-old was able to pull it off this week, calling into the Pat McAfee Show and causing jaws to drop before he hung up the phone.

During his show, McAfee went to the phones and welcomed Dan in Connecticut to the program. But Dan was just there to fool the call-screener, quickly passing the phone off to a soft-spoken voice who admitted his name was Owen, adding that he’s eight-and-a-half years old and a huge fan of the show.

YOU CAN'T BE WATCHING THIS SHOW OWEN

At first, McAfee and his cast of contributors weren’t sure if someone as young as Owen should be listening to the show, but they were quickly charmed by his flattering praise. The cast started thanking Owen for his kind words and that’s when it happened.

McAfee could have channeled Mike Francesa and yelled at the unruly caller to go find an old lady who needs help crossing the street. But despite expressing previous admiration for Francesa, McAfee went a different route. The entire show, Connor included, responded with resounding excitement, cheering and applauding Owen for dropping the f-bomb.

“I wanna let Owen know, if you’re still listening Owen, you’re inspiring!” McAfee said. “Owen, the way YOU talk about sports is inspiring! I didn’t know eight-and-a-half can do that. Shout out, Owen!”