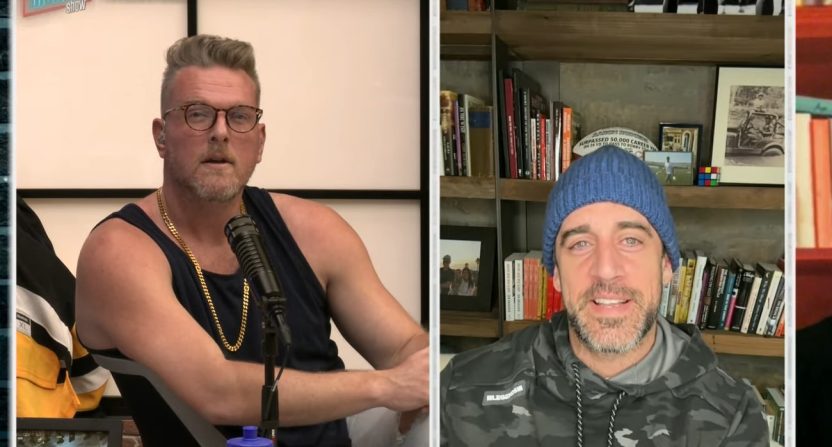 Aaron Rodgers is finally starting to realize the things he spews on The Pat McAfee Show can come with repercussions.

During his appearance on The Pat McAfee Show last week, Rodgers revealed he wasn’t going to be hosting Thanksgiving this year after Packers kicker Mason Crosby and his wife trumped Green Bay’s quarterback by inviting the team to their house first.

“The Crosbys kind of jumped in there and bogarted all of our guest lists,” Rodgers told McAfee. “So it’s at the Crosbys this year.”

For better or worse, Rodgers attended the Crosbys’ Thanksgiving feast and he was very complimentary of the hosts during this week’s appearance with McAfee. Rodgers did, however, take his propensity for conspiracy theories into the kitchen, questioning whether Molly Crosby cooked the turkey herself. But it was the dessert that concerned Rodgers the most, after an uninvited “weirdo” Pat McAfee Show listener arrived at the Crosby house with pie.

“I just want to get this PSA out there,” Rodgers said. “Listen, don’t be a freaking weirdo, OK? Somebody who watched the show, went over to Molly’s house with some sort of pie saying it was from me and then wouldn’t leave. I’m just saying this, that’s creepy and don’t be that person.”

“I don’t think they’re from our show,” McAfee said in defense of his listeners. “They’re from something else. They probably follow you on Instagram or something.”

It probably was a listener from McAfee’s show, because it was on McAfee’s show that Rodgers revealed where he and most of his Packers teammates were going to be on Thanksgiving.

There are certainly some strange sports radio listeners and even weirder callers. Hell, there are creepy people who read and react to the things written on this website. But is it McAfee’s fault if someone shows up to the Crosbys with pie from Aaron Rodgers?

If a fervent fan is going to concoct this wild belief that their quarterback put out a secret signal imploring them for pie on Thanksgiving, Rodgers would seemingly be the best root of that theory. The polarizing quarterback may finally be starting to recognize there can be repercussions to the things he tells the media, and all it took was a rogue pie.