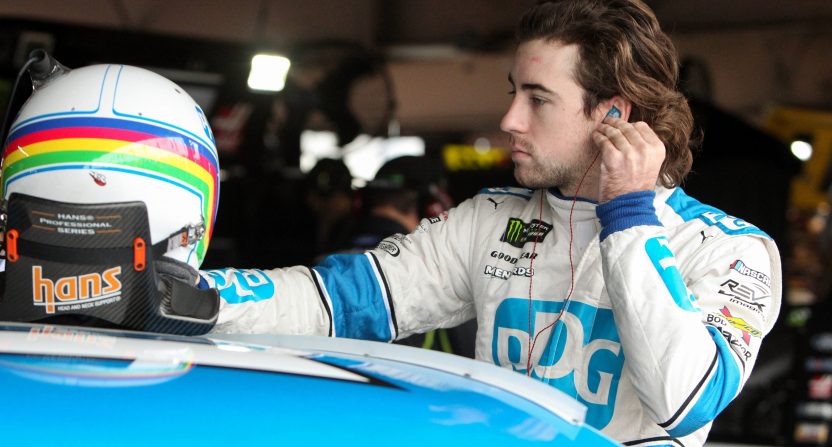 The most entertaining battle from this past weekend might have happened after the Monster Energy NASCAR Cup Race at Talladega rather than on the track. After the race Sunday, a NASCAR reporter talked about media availability procedures after a race, and some drivers took issue with her comments.

This started Sunday night when Associated Press reporter Jenna Fryer tweeted about how many people in NASCAR are already gone from the track and in the air while the winner was talking in the media center.

This sport seriously operates unlike any other major sport. The main race is to see who gets home first.

It’s an inside joke in the NASCAR garage that the big race is the one who can get to the airport first to fly home after a race. Drivers and team owners who have their own planes make a mad dash to the airport and just like fans driving home, there’s a traffic jam when it comes to people taking off.

Many people interpreted Fryer’s comments in a way that sounded like drivers were trying to find a way to duck out of talking to the media after a race which wasn’t really the point, it was more about NASCAR officials not being available to the media to discuss Kurt Busch’s post-race comments criticizing officials. Anyway, one driver who took issue to her comments was Ryan Blaney.

Fryer pointed out the inherent disorganization of media availability after a race. The top three go to the media center but after that, it’s pretty much a free-for-all. Blaney spoke up for the drivers who do stick around.

I’m confused. I believe pretty much every driver media wants to talk to after the race do their interview and answers every question. Are you saying that we should all go to media center? I went to media center after Martinsville this year for running 3rd and got zero questions. https://t.co/6lMjkJ8bcu

Blaney isn’t wrong here. Coming from personal experience, many drivers are open to the media to the point where I feel that NASCAR’s athletes are more available to the media than athletes in other sports. And specifically with Blaney himself, he and his PR staff have always been great to me and we have interviewed him a few times over the past couple years. Granted, I scheduled those interviews in advance so that helps. And that’s very different than trying to talk to someone after a race. But unless a driver just got caught up in a crash and really wants to be left alone and not talk to anyone, most drivers will talk at the appropriate time if someone wants to interview them.

Having said that, there is a myth that some fans seemed to have in their responses to Fryer that just because the media and drivers are at the track for three or four days, drivers are free to talk that entire weekend. And that’s just not true. Drivers have fan and sponsorship commitments, they may be doing something with the track and that’s on top of what they’re being paid to do, be on the track setting up their car for Sunday’s race. There is media availability with a few drivers throughout Friday but other than that and the top two in qualifying, drivers are doing something else and aren’t going to be open to the media at all times. And no one in the media is expecting drivers to be available all the time.

The current system NASCAR has where the media interviews drivers on pit road is pretty disorganized. That was the basis for Fryer’s response to Blaney’s tweet, claiming that a reason why not many people asked him questions at Martinsville is that people were outside trying to get other drivers at the same time.

It’s a long problem. You came to media center and there was no one in there to ask you anything because the few on site are outside utilizing their 6 minute window to chase 20 other drivers. Media on deadline can’t go outside until stories are filed. Ghostown by then. https://t.co/E97ESKgGMM

Jimmie Johnson also responded to a tweet by NBC’s Nate Ryan from a March column he wrote discussing similar issues. Johnson and Ryan came to a consensus right after and everything seems fine there.

Blaney came to a similar conclusion on his podcast, Glass Case of Emotion on Wednesday. He was still a bit hot about the comments from Sunday but also realized that the current situation isn’t perfect for drivers or the media.

Exactly what that improvement is can be left to interpretation. It is unrealistic to have every driver go to the media center because 1) Most media centers aren’t big enough to do that and 2) The media for the most part will only want to talk to a small number of drivers depending on what happened and the other drivers will be standing around not doing anything.

What was suggested by GCOE co-host and MRN radio reporter Kim Coon, which Blaney and I agree with, would be to do like Formula 1 and create a temporary media section on pit road, similar to a mixed zone, where the drivers who aren’t required to go to the media center can visit and the media can talk to any driver they want for a period of time. And then after that’s over, give the media a few minutes to get back to the media center and then you can start the media center interviews. That at least puts everyone in the same place and it’s a lot more organized. It still might be a bit crowded to have 30 or so drivers in the same place so maybe that can be narrowed down a bit but that can’t hurt to at least try.

Coon also made a good point in that TV broadcasters have issues with reporters being in their shot during a broadcast. I understand that, they want a clean shot, but that also delays others from talking to that driver and chances are, they’re asking the same question the TV reporter just asked that person (‘What happened?’ or ‘How does it feel?’), which is frustrating for drivers. That’s the point of drivers going to the media center, so everyone knows what questions were being asked; chances are, those are questions that many other reporters have. So that streamlines the work done by the media and helps them write their stories.

The post-race scrum is a very hectic time. Even though the race is over, that’s the time the media gets post-race quotes, and not only do they need to go after specific drivers for their respective stories, they’re under deadline and need to file these stories as quickly as possible. I have covered international soccer as well as NASCAR races in person, and while NASCAR drivers are more available to talk to the media after a race than pro soccer players, it was easier to get to the soccer players after a game when walking through a mixed zone than trying to hunt and find the drivers. That’s the issue at hand. When there are drivers on pit road available for interviews and someone is in the media center and the location of that media center may be nowhere near pit road, it’s going to be tough for a reporter to be in two places at once.

Looking at both sides, both seem to be frustrated with the current setup but breaking it down, they aren’t actually upset with each other, or at least they shouldn’t be. The media is frustrated not that drivers and NASCAR reps aren’t available (because they are) but that they’re available in a way that reporters aren’t able to do their jobs as efficiently as they can. On the other side, drivers are frustrated that when they do get out of their cars after a race, they’re available to the media but feel it it’s a waste of time if no one is asking them questions or are asked the same basic questions by multiple reporters. And if no one is asking them questions, why should they stick around?

Fryer noted this past Monday that it is her understanding that NASCAR will unveil an updated system soon. Fryer noted that this has been something that the media has been wanting NASCAR to improve the situation for years without success, apparently until this current situation blew up.

It is unfortunate that this issue has been spun into something it is not, and was not. This isn't about me. This is an industry issue that needed to be corrected a long time ago.

Because the opinion of the race fans is that my motives are far deeper, narcissistic or acts of entitlement, I see no further reason in engaging on this medium on this topic.

Everyone within the sport realizes that there has been less and less of a media presence at NASCAR races in recent years, and that’s a big reason why drivers provide so much access. They see the importance of having independent media at the racetrack covering their sport. No one is saying the media is more important than the fans, but the media has an important role in the operation of the sport and the less access media outlets get at the track, bosses start to wonder why there’s a point to send somebody there in the first place.

Let’s face it, I was able to write about this weekend’s Talladega race on The Comeback and I was able to post what I wrote before some big name media outlets who were there because I wasn’t at the track and I’m stuck to what I see on TV and can watch the race to gather my observations. Someone like Fryer at the Associated Press is trying to get quotes from drivers for her piece. Her piece might be better quality because she may get a quote that nobody else has and goes that extra mile for her piece to stand out but I may have been out first and in this “gotta be first” society, someone can look at that and wonder why they’re spending money sending reporters out to 36 races per year when someone can just watch it on TV and file a report.

If that’s the way it goes, it will permanently hurt the sport and it’s important to find a more effective solution to make the post race media situation as organized and as streamlined as possible so media outlets see the value in sending someone to the racetrack each week. That’s why Fryer spoke up, and she isn’t the only NASCAR reporter who shares that view. And maybe this will actually lead to change.