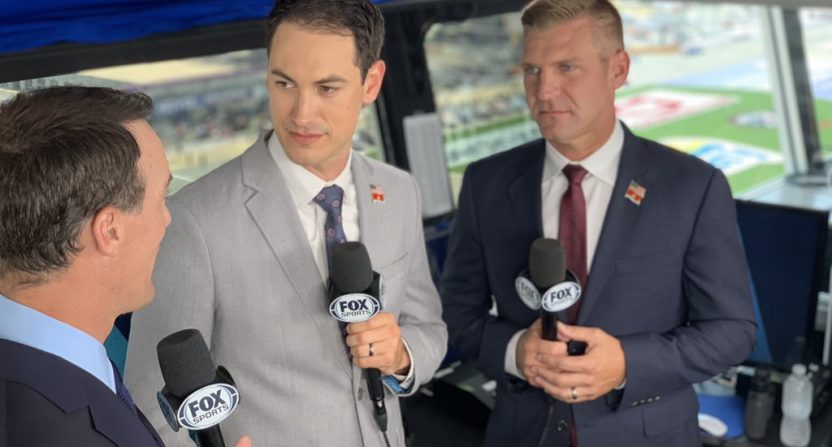 This year, Fox Sports went local for their third annual ‘Drivers Only’ broadcast. After tackling the “Tricky Triangle” of Pocono Raceway and Talladega Superspeedway, the drivers did their broadcast in Charlotte for the Alsco 300. The gang is back, in their same roles as last year, and have added champion crew chief Chad Knaus to the studio, along with Brad Keselowski and Ricky Stenhouse Jr. The broadcasters this year were not exactly only drivers, but for the sake of this piece, Knaus is an honorary driver.

All but Knaus, Keselowski, and Bubba Wallace have done this over the past couple years, so while they don’t do this every day, these drivers are now coming into this broadcast with a greater sense of understanding what they were doing compared to when they first did it in 2017.

The first thing you notice is that these drivers definitely have chemistry, especially among the booth trio of Kevin Harvick, Clint Bowyer, and Joey Logano. Given they had to take control of the majority of the broadcast, these three especially did a great job with Harvick handling play-by-play duties. It also helps that all three have done extensive booth work over the past few years either during Drivers Only or as guest analysts on other Xfinity Series broadcasts. The only real hiccup was a sequence where Harvick and Logano didn’t respond to Bowyer’s question to them about whether or not the wear of PJ1 compound was causing so many cars to hit the wall, something Bowyer hilariously pointed out a couple minutes later.

While they weren’t featured quite as often, the studio crew of Keselowski, Stenhouse, and Knaus also did a fine job. Knaus has done studio work on NASCAR RaceDay for the past few years so he had it down already, but Keselowski and Stenhouse were great too. Last year, it seemed that Stenhouse was somewhat nervous and that came across the screen more than he wanted to, but he seemed well within his element this time.

My only real complaint for this year’s broadcast was in the pit reporting. Specifically, I could barely hear Ryan Blaney and Erik Jones when they filed reports during green flag conditions. This was a problem last year as well with both of them, and that doesn’t seem to have improved. They’re knowledgeable people and were great at doing the actual pit reporting job, they just needed to project their voices louder for people to hear them at home.

Bubba Wallace knew his stuff, but seemed to get a bit flustered at times when cued to file a report. Granted, it’s not his everyday job and when it’s live, the only thing you can do is just laugh about it and move on. But it was pretty hilarious when Wallace forgot who was driving the #4 car (Ross Chastain) and then about 20 minutes later, a previously filmed segment of Wallace interviewing Chastain played.

We love you, @BubbaWallace. pic.twitter.com/OPciRT9RS0

To his credit, Wallace improved as the race went on and I could hear him the majority of the time, so he made the best of a bad situation and ended on a positive note. That’s all you can ask being in that situation.

One thing Blaney, Jones, and Wallace deserve credit for is that they had to work out in the heat. Granted, they weren’t wearing firesuits and doing their day job driving inside a 140-degree car for nearly three hours, but I can tell you it was incredibly hot on pit road and they didn’t have the luxury of the others to work in air conditioning. So under some tough conditions and navigating the hectic pace of pit road, the guys deserve praise for that.

Fox’s Drivers Only broadcast isn’t the only all-athlete broadcast out there, but it’s one of the best. While some broadcasts ditch any and all informative analysis (TNT’s Players Only NBA broadcasts), Drivers Only combines a healthy mix of good-natured fun and analysis that isn’t far off from what viewers get from the regular crew. And in doing so, viewers get something different for one weekend out of the year that they enjoy. While things may not be perfect, it’s a worthwhile and popular alternative.