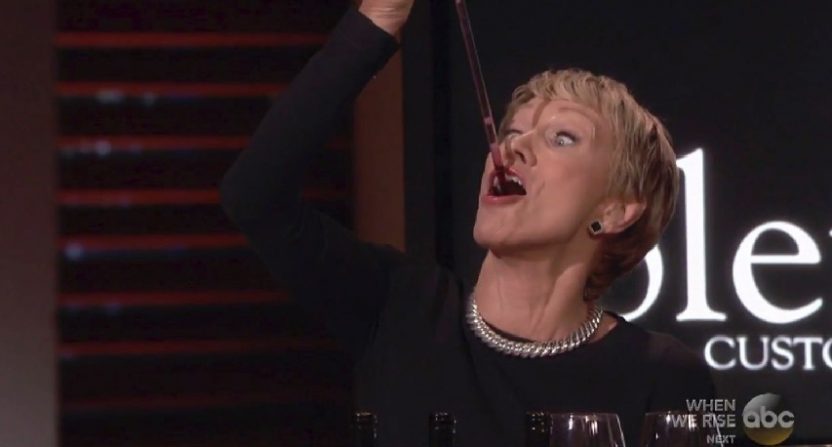 “I don’t think most people realize how much it takes for a woman to get ready in the morning,” Brown says in her opening vignette. Since slightly more than half the world’s population is female, that seems unlikely — but hey:

Either way, her advanced microfiber curlers both dry and style women’s hair in their sleep, allowing for a super-fast morning routine. Fans of the show, Brown and her family always watch Shark Tank together (much like the Schalters):

Brown’s two-month-old Kickstarter campaign hit its $10,000 goal in two days, and closed with $47,000. Selling direct on her website since then, she’s sold $6,000 worth in three weeks. That’s awfully early to be coming into the Tank, but Brown’s delivering a great pitch.

Unbelievably, this working opthamologist came up with the idea while doing her daughter’s hair last summer, enrolled in fashion school, developed the product and worked whenever she wasn’t operating on eyeballs or sleeping to launch the hell out of it. She’s put in $100,000 of her own money to build a better mousetrap, and now the world is beating a path to her door:

“I think this is perfect for QVC,” Lori says, “I’m going to blow it out.” She asks Brown to accept her offer immediately: $75,000 for 30 percent. As the other Sharks object to being frozen out, Lori sells her take-it-or-leave-it:

As you see in the video, Brown haltingly counters at 25 percent — haltingly, because she’s watched the show and knows full well countering a yes-or-no offer usually results in a pulled offer. But as Robert points out, Lori seems completely sold on this businesswoman and her product.

Should you buy? I used to rock two solid feet of hair, but I never styled it like this. If you normally dry, curl or iron your hair despite hating taking the time, you definitely SHOULD BUY.

Right off the bat, Dim’s valuation makes me shake my head. He’d better have some massive sales to back up his interesting wine-blending kit:

Right now, it’s a direct-to-consumer product: $99 for four bottles of single-varietal wine which can be put inside of bags on https://chrisstuff.com/collections/wine-bags-gift-bags, blending tools and an instruction kit. When you’re done, you can upload your blend ratios, design a label and order a case of it. As Barbara and Kevin give it a shot, Barbara demonstrates my approach to wine tasting:

This seems like a lot of fun, a great way to spend an evening with friends. But the business model is pretty fuzzy and pretty soon, Dim is talking about weddings and cruise lines and bulk business-to-business sales.

“I thought you were selling fun,” Robert says. But we’ve gone from a date night to a party experience to trying to sell wine by the case. How much is a case, anyway? Oh wow: $300 for 12 bottles, which works out to a pretty steep $25 per. Dim says only about 15 percent of customers actually order their blend after they make it.

“You will never sell wine at more than $14 a bottle,” declares Mister Wonderful, and the network declares a DRAMATIC COMMERCIAL BREAK.

“I love it as a gift,” Lori says. “I love it as a shared experience.” But with the model all over the map and the numbers fuzzy, she’s not willing to pay the steep asking price to get in on his company.

She decides to take a self-described flyer: $250,000 for 30 percent of the company. He then admits he has a partner in the business, and that partner won’t accept dealing away that much of the stock.

That’s when Lori comes up with a plan that helps them both: a $250,000 loan at eight percent interest, for just a 10 percent equity stake:

Swim or chum? “Let’s have a drink!” SWIM. So far, Lori’s two-for-two — and it seems like she’s been wooed as much by the entrepreneurs themselves as anything else.

Should you buy? This sounds like an outstanding way for two couples to split four bottles of wine and have a fun evening in instead of a pricey evening out. I think you SHOULD BUY the kit. I can’t imagine the end result of four amateurs goofing around is going to be worth anywhere near $25 a bottle, though, so SHOULD NOT BUY a case.

“MealEnders are a totally new approach to weight management,” Bernstein says, and again I bust out my briefcase full of scoffs. Yet MealEnders is actually interesting: a chocolate-coated candy that’s naturally formulated to be an appetite suppressant:

The Sharks all pop one in their mouth, and after a few seconds they all start to agree it’s doing something, and that something feels something like what Bernstein described. THEN WE GET MISTER WONDERFUL AND BARBARA KISSING, BUT WHY:

Yeah, maybe next time the wine-guzzling pitch should come last.

Bernstein’s been in the market for a year and a half, and claims a very low dissatisfaction rate. He’s sold $1.4 million worth in just a year and a half, entirely through Amazon and their website. But even if practically no one is returning MealEnders once they buy, they’re not often buying again. Bernstein admits they have just a 21 percent re-order rate.

Counting his $250,000, plus a convertible note, they’ve raised $1.1 million, $170,000 last month, and maybe a little more this month. But they’re spending half their revenue on advertising. Cuban flips out — if they’re spending this much to make that much, this enterprise is doomed:

The Sharks all start going out, and Bernstein seems flummoxed. His product works! It sells! They’re almost kind of profitable!

“This is the first weight reduction product that came on Shark Tank that wasn’t just torn to shreds,” Mister Wonderful says — but the aversion aspect of the product is making him, well, averse to ever buying the things again.

Barbara totally gets the product, but at this point the math just doesn’t work.

Swim or chum? “Although I love your product, I’m out.” CHUM.

Should you buy? I love to eat, and I struggle with satiety cues. I’m totally willing to give these a shot. I’m going with a strong SHOULD BUY, even knowing there’s a 4-out-of-5 likelihood you won’t order a second bag.

Ha ha ha ha ha — this is brilliant. Although repurposed-fabric bags are nothing new, not even on Shark Tank, these guys are getting acres of tough, waterproof, eye-catching fabric for dirt cheap by buying old billboards:

That’s right: until the turn of the millennium or so, billboards were painted by hand. But now they’re printed onto tough vinyls and stretched out over the blank billboard frames. Rareform just snaps them up, cuts them up, makes them up into bags and marks them up for excellent margins.

But unlike Firefighter Turnout Bags, these aren’t immediately self-explanatory; the brothers admit telling the story is the biggest sales obstacle. Nevertheless, they’ve sold $1.1 million in revenue over three years, $700,000 of which is in the last 12 months.

Things start to get weird: The brothers put in their own money, then raised money from family, then took some investment, then took more investment, and now they don’t have a lot of the company left to sell:

Lori and Mark can’t backpedal quickly enough. If this business was ever attractive, being underleveraged at wacky valuations has turned them completely off:

Kevin offers the Rareform brothers a lifeline: $300,000 as debt at eight percent interest for 36 months, plus a 10 percent equity stake. This is the only offer they’re going to get, which means we’re going to get a DRAMATIC COMMERCIAL BREAK.

They don’t want to do that much debt at that much interest at that long a term, preferring a straight equity deal.

Um, what? They don’t have much equity left to give away!

Mister Wonderful explains that the deal just isn’t working any other way:

They’re balking, and the already-out Barbara takes a few seconds to explain exactly why this deal is so harsh for them. Kevin doesn’t appreciate it:

Robert, though, hits on the key point: everything else aside, these guys need the money to keep growing.

Happy to be partners, @RAREFORM !! Young entrepreneurs, ready to innovate. Let's do it! …and you can't rub my head until I get my $ back.

Should you buy? I love the idea, but each bag, backpack and wallet is one-of-a-kind. If you find one you like, by all means, you SHOULD BUY.