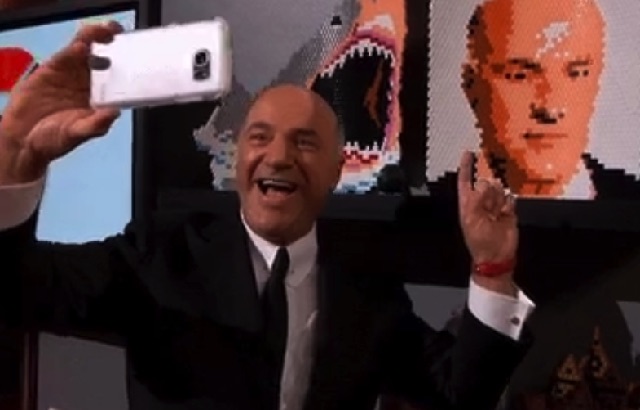 “What do you do with all that grease when it’s cleanup time?” Actually, this is a great point: fryer grease is a major pain. Newsome set out to both save recyclable containers many of us currently use for grease disposal — AND our cities’ pipes — with a decompostable grease-disposal product:

She’s got a patent for the combination of the bag and the environmentally friendly $12.99 for three, which is a bit steep, and it currently costs her less than three bucks to make.

“I have honestly never fried anything,” says Lori, and she knows she’s not the right entrepreneur for this. She’s out. Barbara says what I say: Can this thing accept hot bacon grease? Nope, that’s the trade-off: it can either accept hot grease, or biodegrade. Barbara thinks not being able to handle hot pan grease kills the concept. Several Sharks think there’s a low market overlap between consumers who fry a lot of food and consumers who stress about the environment.

“I’m going to give you an 8.62 for presentation,” Mister Wonderful says — and Barbara and Robert disagree, she’s given a 10 of 10 performance. But one by one, they all go out.

Barbara’s back in, with a vengeance! She wants to know if she can bring the price down from $6.99 for three bags. No sweat. Costs are less than 80 cents a bag. Barbara’s offer is $75,000 for a whopping 50 percent of the company.

Swim or chum? “I can’t believe it,” Newsome says. “She really believed in me. I love Barbara, and I think she’s going to be an awesome partner.” SWIM.

Should you buy? Yup yup yup, you definitely SHOULD BUY, especially if you cook a lot of delicious food or want to make sure all your household oil waste (including motor oil, etc.) is responsibly disposed of. If we all had Grease Bags, our aging waterworks would all be much better off.

This creative 21-year-old entrepreneur’s family struggled with the loss of his father, and again when they emigrated to New York City with three generations crammed into a small apartment. But he’s all about creative play and exploration, and his PinBlocks are like levelled-up LEGOs:

The starter pack runs $19.95, and his cost for it is just $3.00. We learn Smolianskyy originally had a partner who helped build out the back end. While that partner’s no longer involved, he still owns 15 percent of the company. A trip to ToyFair generated a lot of interest from big-box toy stores, but only drew POs from smaller indie stores.

Is the IP protected? Smolianskyy’s applied for two patents, and received a design patent for the specific design of his bricks. The Sharks want to know what drove him to build this company:

“The only way I see for this to work,” says Mister Wonderful, who has a history in the toy industry, “is to partner with another toy company.” He offers $100,000, but it’s contingent upon Smolianskyy partnering with a toy giant and making his money back with a royalty. Smolianskyy doesn’t like this model, he wants to build his brand from the ground up. All the Sharks immediately say this makes his path far, far harder — and all the Sharks but O’Leary go out.

We get the first DRAMATIC COMMERCIAL BREAK.

When we come back we get the updated offer: O’Leary is now offering $100,000 for 50 percent, contingent on the partnership. But he adds a wrinkle: he’ll pitch the deal to his toy-company contacts, and Smolianskyy can pick the final partner.

“Vlad, you should take this offer,” Cuban says. It’s a huge chunk of equity to give up — and with the old partner’s carve-out, it’ll make O’Leary the majority shareholder.

Swim or chum? “Kevin, you’ve got a deal.” SWIM. Cuban chortles: O’Leary thought he made the deal worse for Smolianskyy, but with the control provision, he may have made it better!

Should you buy? These look super rad. If you have kids — or are a kid at heart, you SHOULD BUY.

Instead of an update on a past entrepreneur after this segment, we get a Daymond John biopic. It’s very cool:

“You are looking at the queen of breastfeeding fashion,” Petzold says, and look: If you or your partner has ever breastfed, you understand the logistical and sartorial difficulties of wearing cute clothes while breastfeeding, and you understand how huge the need here is.

They charge a $29 consultancy fee, match a mix of their own bespoke products and curated picks from others. The Sharks begin challenging her on how exactly this inventory is acquired and managed, and Petzold is jumping down their throat with incomplete and/or braggy answers that don’t quite answer it.

She’s got $67,000 in debt, a big pile of inventory, and a whole bunch of promises and bold statements on where her business model is supposed to be. The further they drill down, the more it’s clear she really doesn’t understand what she’s doing. She can barely stop selling herself and her ideas long enough for the bowing-out Sharks to explain where she’s going wrong:

She just keeps digging. By muddying her numbers, she’s making it clear she expects a Shark to come in and fix the part of the business she isn’t any good at: the actual business part.

“Passion is great, but it’s only one small part of running a business,” Lori says. “I’m out.”

Swim or chum? “I had my moment and it sucked, but thank you.” CHUM.

Should you buy? If this product survives long enough for you to need it, you definitely SHOULD BUY.

Everyone is being so harsh to @MamasMilkBox on @ABCSharkTank bc this business is so needed! Moms wants stylish nursing clothes!

“First, let me give you the origin story.” Okay, I’m hooked: Radioactive spider? Errant burst of cosmic rays? Not quite:

NicePipes leg warmers sell for $40, and cost her under eight bucks to make. She’s done $80,000 in sales, and everything seems to be going the right way. But wait — this is successful at a really small scale. Where is Binderow getting a million-dollar valuation?

“You seemed so reasonable and normal,” Herjavec says, “and then…” he looks at the million-dollar price tag. The Sharks start to break down along gender lines: Mister Wonderful, Robert and Cuban lambasting her for her unrealistic ask, and Lori and Barbara recognizing all the good work she’s done to get to this point:

The back-and-forth continues as Sharks drop out. Barbara gets Binderow to open up, and be “brutally honest.” She had no idea how to value the company:

Now THIS is a DRAMATIC COMMERCIAL BREAK.

When we come back Barbara explains her offer is contingent on a partnership with Grace & Lace, a Shark Tank veteran she invested in, which is now doing $20 million in revenue. That sounds great to our entrepreneur, but she can’t bear a 40 percent bite out of her equity. Binderow counters at 25, and it’s far too low for Barbara.

“You have a nonproprietary sock and you’re sitting alone in your living room,” Mister Wonderful says, and all the Sharks shout him down. But what happens next is the ultimate Shark Tank Rorschach Test: Did walking away from a deal that was perfect in everything but price prove Binderow knew what she was doing? Or did it prove she was clueless all along?

Swim or chum? Binderow’s CHUM, by choice, but Barbara said she was having second thoughts as Binderow walked away. Then check out this tweet:

Should you buy? I am not a yoga person, but if you’re living that Lululemon life and Flashdance-style leg warmers aren’t keeping your ankles toasty, sure: you SHOULD BUY.

It’s very, very rare that I’m this enthusiastic about all four products pitched, but they’re all high-quality, fit a clear need and are reasonably priced for the market.