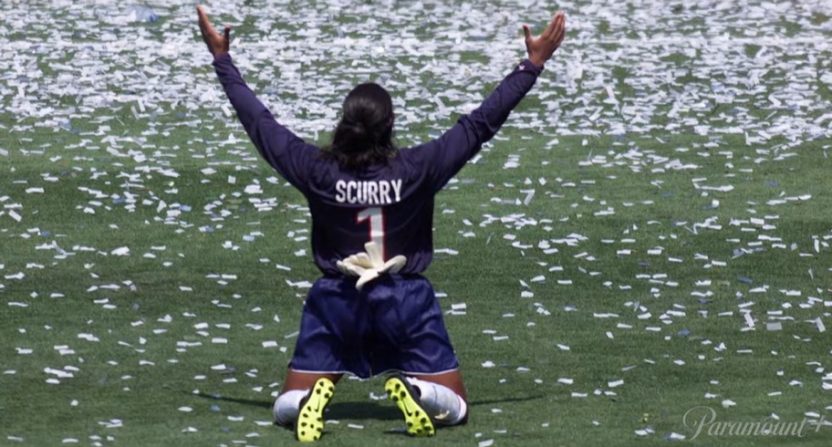 For many, the members of the iconic 1990s United States women’s national soccer team seem like superheroes straight out of a comic book. They were trailblazers and champions who set the stage for the success that the current squad enjoys today. They were people like Mia Hamm, Julie Foudy, Brandi Chastain, and Briana Scurry.

Hamm remains the biggest star. Foudy remains in the public eye because she’s an ESPN analyst for women’s soccer. Chastain remains immortalized due to one of the most memorable celebrations in sports history. When she ripped off her jersey after the 1999 World Cup-winning penalty kick, that joyous reaction put her on the cover of Sports Illustrated.

What about Scurry? As the goalkeeper, she certainly was as valuable as anyone. Without her defense against China, perhaps the Chastain moment never happens. And yet, Scurry has been overlooked and underappreciated. Was the two-time Olympic gold medalist ignored because she was Black and gay?

It has taken time, but Scurry is finally getting her due. The Paramount Plus documentary The Only shines a light on the Hall of Fame keeper. It attempts to answer questions as to why Scurry wasn’t as celebrated as her teammates. It details the 2010 concussion which led to her having suicidal thoughts and being on the verge of financial ruin. It’s also inspirational, revealing her comeback from the worst moments of her life.

The Only is aptly named. Scurry recalls being the lone African-American girl in her Minneapolis-area elementary school, junior high school, and high school. She was the only Black on every sports team she played on during her formative years. At the time, Scurry said she never noticed racism. Because of that, according to her biographer Wayne Coffey, she never felt limited.

Scurry dreamed of becoming an athletic star after watching the 1980 ‘Miracle on Ice’ hockey match when the United States upset the Soviet Union in the Olympics. That kind of focus and determination served her well, as she became as Foudy described, “the best shot stopper I’ve ever seen.”

Her most famous stop occurred in the 1999 World when she made a save against China which set up Chastain’s famous score. The Only delves into the controversial play, during which Scurry was accused of cheating because she may have illegally moved forward before the ball was kicked.

To Scurry’s credit, in the documentary, she addresses the play by saying, “It’s a decent question, but the referee was right there.” This seems like the equivalent of pass interference in football. If it’s not called, there’s not a lot that can be done.

After Chastain’s penalty kick, the women’s team became rock stars. They were on the late-night television circuit. They were in commercials. However, some team members became a lot more famous than others. And Scurry’s absence from the limelight seems even more noticeable in hindsight.

Scurry doesn’t talk much about the lack of attention in The Only. Instead, her teammates and others had a lot to say. Foudy didn’t pull punches. She said that racism and homophobia played a role in Scurry not receiving her fair share of corporate sponsorships and media coverage.

“Absolutely that affected the attention she got,” Foudy said.

Scurry never complained. Even when thrust into a controversy that wasn’t her fault. The Only examines the infamous benching of 26-year-old Hope Solo in favor of 36-year-old Scurry in the 2007 semifinals of the World Cup. After the 4-0 loss to Brazil, Solo ripped the decision by coach Greg Ryan on national television.

The video is still shocking. You rarely see an athlete publicly throw a teammate under the bus like that.

Solo declined to participate in this documentary. Interestingly, Ryan was fired a month later.

The most emotionally moving parts of The Only chronicle Scurry’s post-concussion downward spiral. The after-effects ended her career and almost destroyed her life. We know a lot more about traumatic brain injuries now. But at the time, Scurry suffered mostly in silence and withdrew from loved ones.

“(They) didn’t know the hell I was in,” said Scurry who wound up selling her medals to pay her bills.

Through a set of fortunate circumstances, and with help from friends, Scurry was able to get proper medical attention. She’s now an advocate for brain health, educating others about the dangers of concussions.

Scurry co-authored an autobiography with Coffey, which was released last month. The Only feels very much like a companion piece. Scurry is in the spotlight now. Unfortunately, it took far too long for us to pay attention.