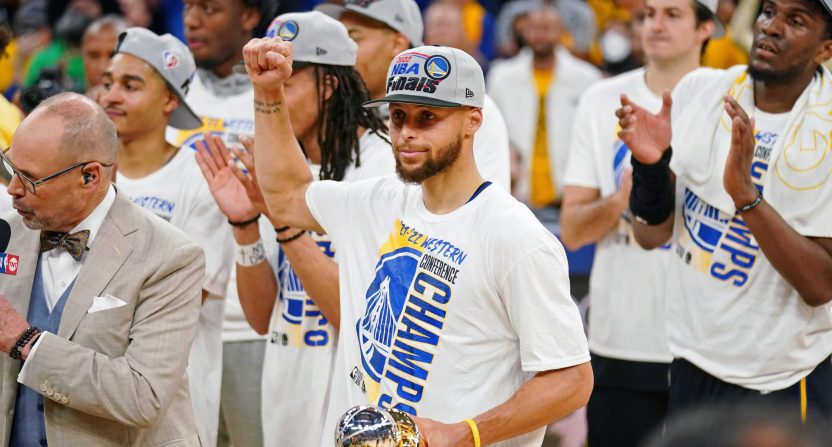 Editorial note: Last month, we ran an article about a Youtuber compiling 25 years of TNT show promos on the NBA on TNT. Below is an article he pitched us. If you’re interested in writing for us, please email awfulannouncing@gmail.com with your pitch! The author can be reached @velodus.

The Golden State Warriors are hardly what you’d call an underdog in the 2022 NBA Finals. The Dubs not only have home-court advantage over the Boston Celtics, but they’re also deep, (mostly) healthy, well-rested, and they’re a dynastic superteam whose core has now been to six consecutive Finals when Steph Curry and Klay Thompson are both available.

And, oh yeah, they’re quite literally not underdogs.

Right now, Las Vegas sportsbooks list them as slight favorites to win their fourth championship in the last seven years. But even if it doesn’t happen, and even if Boston does win the title, you wouldn’t consider it shocking to suggest that the Warriors could win, right? You wouldn’t consider it an unreasonable or almost impossible prediction – not when Golden State has both the better record and better odds. And yet, that’s exactly what FiveThirtyEight has done; their seemingly-scientific RAPTOR model projects that the Celtics have an 80% chance of winning – a rather stunning probability that was even higher three days ago, when the site gave Boston an 83% chance of winning the championship.

As it turns out, FiveThirtyEight is hardly alone in doubting the Dubs from an analytical perspective. ESPN’s Basketball Power Index (BPI) gives the Celtics a staggering 86% chance to win the championship, while Basketball-Reference gives them a 57% chance to win it all. At the beginning of the season, stats guru John Hollinger questioned the Warriors’ title chances so much that he predicted that they’d win only 39 games – a prediction that obviously didn’t hold up well at all. And yet, even among the competition, FiveThirtyEight truly stands alone in their complete and utter mistrust of the Warriors, because not only do they not believe in them now, they’ve never believed in them, to a degree that puts even Hollinger to shame.

On October 19, 2021, the day the NBA season began, FiveThirtyEight’s RAPTOR model projected that the Warriors would go 36-46, finish with the eighth-worst record in the NBA, miss both the playoffs and the play-in tournament, and have only a 0.4% chance to make the Finals and 0.1% chance to win the Finals. It’s genuinely, without exaggeration, one of the worst sports predictions you’ll ever see in your life, not only because it came from FiveThirtyEight – a site well known for its predictive prowess (if one conveniently overlooks how horrifyingly inaccurate it’s been for two general elections in a row), but because it’s a prediction that virtually no one was making.

The Warriors, coming into the season, were given the fourth-best betting odds of any team in the league to win the title. They had gone 39-33 the season before and were not only getting back Klay Thompson, but a much-improved Jordan Poole, who was a preseason darkhorse to win Most Improved Player. And yet by projecting that the Warriors would win 36 games, FiveThirtyEight actually predicted that the Warriors would get worse by getting back Thompson – a rather preposterous prediction, given that Golden State had been the most dominant team in the league for years when he and Steph were healthy, and had come within a Draymond Green suspension and a pair of devastating injuries of potentially winning five consecutive championships.

So it wasn’t exactly a reach to think the Warriors would, at bare minimum, be competitive again with Klay back in the fold. And yet FiveThirtyEight didn’t even have the eventual Western Conference Champions (and possible NBA champions) making the playoffs, a jaw-dropping miscalculation that’s inconceivable to make in what’s probably the easiest sport to predict.

It wasn’t just the beginning of the year that saw the RAPTOR model dismissing the Warriors, too. When Golden State got off to a furious 10-1 start, which made them the best team in the league at the time, FiveThirtyEight’s model was so slow to adapt that they still had the 4-8, injury-riddled Indiana Pacers as having a better chance to win the championship than them. And even after Klay came back, and after Jordan Poole established himself as a legitimate scoring threat, at no point during the entire regular season did FiveThirtyEight give Golden State even a 10% chance to win the Finals.

On April 14, a couple of days before the start of the playoffs, FiveThirtyEight gave the Warriors an 8% chance of winning it all. On May 5, with the Warriors locked in a 1-1 series with the Memphis Grizzlies, FiveThirtyEight gave the Dubs only an 18% chance to reach the Finals and a 7% chance to win them; the Phoenix Suns, on the other hand, who would go on to lose their second-round matchup, were given a 41% chance of winning the Finals – nearly six times more than Golden State. A week later, with Golden State leading the Grizzlies 3-2, their chances of winning the title had shrunk to 5%. And after going up 3-1 on the Dallas Mavericks in the conference finals, their odds of a championship still stood at just 16%. Remarkably, as disrespectful as Golden State’s current 20% chance of winning the Finals might seem, it actually represents the single highest odds FiveThirtyEight has given them to win the title all season long.

All of which is to say that if the Golden State Warriors win the championship this month, FiveThirtyEight’s bafflingly fatalistic prediction about them at the beginning of the year – which is already as bad as any sports prediction you’ll ever see – will enter an even greater pantheon of horrible predictions that, with any justice, will render their RAPTOR model completely irrelevant. Their model has discounted the Warriors so thoroughly and so consistently that if we were to actually take their preseason and in-season probabilities seriously, the Warriors winning it all would have to be considered one of the greatest longshot upsets in the history of professional sports. It would mean that their model was so thoroughly useless that at no point during the entire NBA season did it even approach predicting who would actually win the NBA title – an almost unthinkable feat for a model on any prediction site, let alone one run by Nate Silver.

In other words, if you had written on a napkin in October that the Warriors would have at least a 0.2% chance of winning the title, your napkin would’ve been of greater service to the NBA community than FiveThirtyEight’s RAPTOR model has been for an entire year.

Of course, we’ll have to wait and see if the Warriors will indeed win the title or not. But hey – just because we don’t know who’ll take home the Larry O’Brien, that doesn’t mean we don’t at least know who absolutely, positively doesn’t know for certain either: FiveThirtyEight.