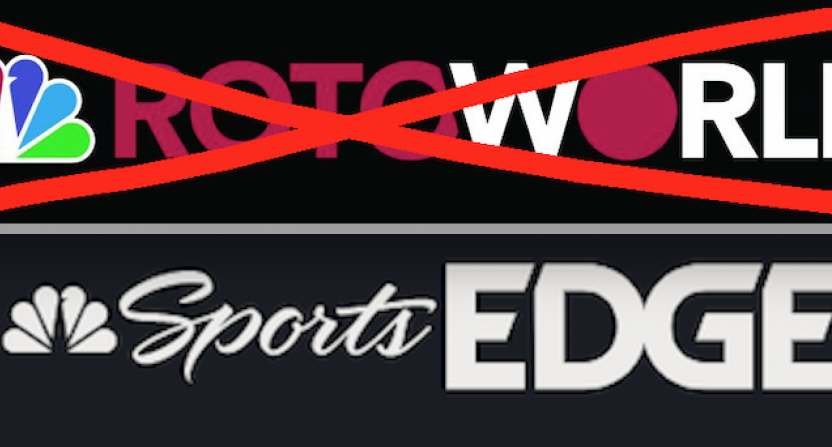 Fantasy sports website Rotoworld is no more. At least in name. Tuesday night, the site rebranded to NBC Sports Edge, eliminating what had been an established name in fantasy sports and sports transactions for many fans.

Sometime in the last few hours, Rotoworld apparently became NBC Sports Edge. Redirects to that address and has a new logo/colors/etc.

Everything seems basically the same… yet different. pic.twitter.com/PDSKyOlpe4

As editor Matthew Pouliot explained on Twitter, the change in name isn’t simply a rebrand. The new NBC Sports Edge site is incorporating more tools for sports betting along with the information provided for fantasy sports. However, those who went to Rotoworld for fantasy tips and analysis shouldn’t find anything different at the site.

As you may have noticed this morning, Rotoworld has rebranded as NBC Sports Edge, and we've gained some really impressive betting tools. However, nothing is changing for the fantasy news crew. We're all doing our usual thing, and everything should look much the same as before.

That point was reinforced by baseball writer D.J. Short, assuring readers that the content they enjoyed at Rotoworld will still be available. But the site has a different look and brand now.

I know change can be hard, but I promise that the switch from Rotoworld to NBC Sports EDGE doesn't really change anything in what we do on the fantasy side. Same team, new uniforms! We have some new additions coming soon which will make the baseball team better than ever.

A visit to the new NBC Sports Edge confirms what Pouliot and Short are contending. At the top of the page are featured images on which NFL players to monitor during the offseason, NBA players worth adding to your fantasy team right now, and NBCSN videos and schedules.

As usual, the site has 10 fantasy-oriented headlines to follow. That news largely concern the NBA and NHL right now, but there are also NFL trade rumors that could make players like Marcus Mariota suddenly appealing to fantasy owners. The right sidebar also highlights players who performed well in the previous night’s action. As of this writing, Sacramento Kings rookie Tyrese Haliburton tops that list following a 15-point performance against the Philadelphia 76ers.

Rotoworld rebranding to NBC Edge is yet another sign of how fantasy/betting content hybrids are the present. All gray area washed away with PASPA's dismissal. Intersections and overlap between fantasy/betting are omnipresent. Would expect more major sites to follow suit.

Underneath those headlines, however, are the betting tools that NBC Sports Edge will feature. Readers can choose among four monthly (or annual) plans that can help with drafts and season-long fantasy sports, with another option for daily fantasy.

There’s also a plan solely focused on betting. And, of course, a plan is available that incorporates all of the tools the site offers for fantasy sports and betting.

Looks like the Siren Call of sports betting $$ has hit our former home. The beloved Rotoworld has rebranded to NBC Sports Edge. I get it, but still a bit sad.

Getting rid of an established brand in fantasy sports is a bit curious. But pulling everything under the NBC Sports umbrella probably shouldn’t be a surprise. And if the aim is to eventually emphasize sports betting content over fantasy information — a trend becoming apparent in everyday sports fandom, as well — then the rebrand makes sense for a larger outlet like NBC Sports.

Though this change might reflect the direction of consumer trends among sports fans, it’s still a somewhat sad development among longtime fantasy baseball and football fans who relied on Rotoworld. And not just for news and information that could help with a fantasy team, but sports news in general. Who’s injured? Who’s playing well? Which players are on the rise or decline? Such content informed sports watching in general.