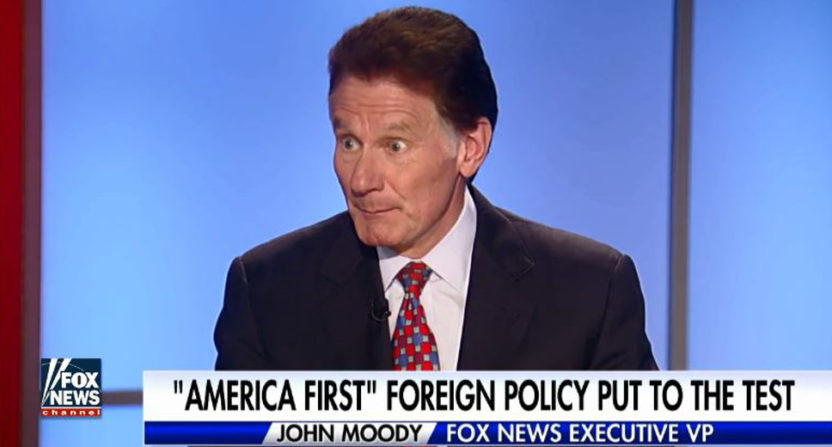 The Olympics are barely underway, with the opening ceremony not even taking place until Friday, and we’re already in the middle of quite the controversy around them. That comes from Fox News executive vice president and executive editor John Moody, who penned a column for the network’s website titled “In Olympics, let’s focus on the winner of the race — not the race of the winner.”

Moody is apparently upset about comments Jason Thompson, the United States Olympic Committee’s director of race and inclusion, made to Rick Maese of The Washington Post this week about how the USOC was “taking its most diverse team ever to a Winter Games.” The article discussed the breakdown of the 243-person U.S. team and how “most diverse” still comes with a big caveat, noting that “10 are African American — 4 percent — and another 10 are Asian American. The rest, by and large, are white.”

But Moody is annoyed that people are talking about race at all, and he appears to think that the USOC is rigging “quotas” to boost diversity:

Unless it’s changed overnight, the motto of the Olympics, since 1894, has been “Faster, Higher, Stronger.” It appears the U.S. Olympic Committee would like to change that to “Darker, Gayer, Different.” If your goal is to win medals, that won’t work.

A USOC official was quoted this week expressing pride (what else?) about taking the most diverse U.S. squad ever to the Winter Olympics. That was followed by a, frankly, embarrassing laundry list of how many African-Americans, Asians and openly gay athletes are on this year’s U.S. team. No sport that we are aware of awards points – or medals – for skin color or sexual orientation.

…Insisting that sports bow to political correctness by assigning teams quotas for race, religion or sexuality is like saying that professional basketball goals will be worth four points if achieved by a minority in that sport – white guys, for instance –  instead of the two or three points awarded to black players, who make up 81 percent of the NBA. Any plans to fix that disparity? Didn’t think so.

If someone is denied a slot on a team because of prejudice, that’s one thing. Complaining that every team isn’t a rainbow of political correctness defeats the purpose of sports, which is competition. At the Olympic level, not everyone is a winner. Not everyone gets a little plastic trophy to take home.

That’s an impressive way to even work in a shot at participation trophies there, but the rest of this seems a long way from any sort of facts. The USOC as a body doesn’t have a whole lot of say in who winds up on the Olympic team; each sport has qualifying events (often national championships), and those who perform the best at those championships earn the Olympic slots. Yes, there are some subjective selections, especially in sports like figure skating where season-long performance is considered as well as showings at the trials, but those decisions are made by U.S. Figure Skating’s nine-member “International Committee Management Subcommittee consisting of officials, coaches and athletes,” are done according to strict results-based criteria, and are approved by the U.S. Figure Skating International Committee, not the USOC.

Similarly, the hockey teams are of course somewhat subjective picks, but it’s hard to imagine that USA Hockey is putting their medal chances behind any desire to be more diverse. They’re picking players based on performance, both past and projected.

And while those sports aren’t even all that subjective, they’re more subjective than many. In many Winter Olympic events like bobsleigh, luge, skeleton, skiing and so on, it’s all about the times. There’s no evidence of any “quotas” for the USOC to fill, and it’s hard to envision how they could even do that under the current qualification structures. The people selected to go to the Olympics are picked because they’re seen as the best at what they do, contrary to Moody’s premise here.

And Maese’s piece illustrates how the push for greater diversity is about finding and encouraging athletes who are naturally talented, but don’t necessarily have the support system of others, as the passage on speed skating illustrates:

Speedskater Shani Davis will be competing in his fifth Olympics, and in 2006, he became the first black athlete to win a gold medal in an individual sport at a Winter Games. But even before that, he was integral to the launch of DC-ICE, a nonprofit that has helped introduce the sport to thousands of inner-city youth in the District of Columbia. He still serves as honorary chairman and travels to Washington regularly for events.

“The No.1 thing for us, it has nothing to do with natural athletic talent. That’s the least important factor,” said Nathaniel Mills, a three-time Olympic speedskater who runs DC-ICE. “By far, the biggest factor is parent support. Is there a parent who’s going to bring their kid at 6:30 a.m. in January to practice? The commitment of time and the financial outlay is significant.”

When [Maame] Biney  [the U.S.’ first black short track speedskater] was barely 5 years old, she was pointed to DC-ICE and made weekly treks to Fort Dupont Ice Arena from her home in Northern Virginia. Her father, Kweku, who works in maintenance for a company in Reston, poured thousands of dollars and sacrificed thousands of hours for his daughter to pursue the sport.

“For every Maame, there’s 20 other kids who are more naturally talented in speedskating but didn’t have the family support, either economically or from a nurturing perspective to get to that next level,” Mills said.

The goal is to produce more athletes in these sports who can compete for Olympic berths, which would presumably then increase the quality of a team the U.S. can send, which would then increase their medal chances. Maese’s piece discusses how that’s happened in bobsleigh, where USA Bobsledding actively recruits from other sports, and has found Olympic medal success from doing so. And that’s the goal that Moody supposedly wants here, so it’s unclear why he’s complaining; yes, the U.S. team has more minority athletes and more openly gay athletes than it has in the past, but it’s hard to prove that those athletes were picked based on that criteria, and many of them have strong medal potential.

Thus, “Darker, Gayer, Different,” while not even close to an actual slogan or any sort of concerted effort, might wind up bringing home the medals Moody seemingly wants despite his objections.

Fox News has pulled the column. According to a spokesman:

“John Moody’s column does not reflect the views or values of FOX News and has been removed.”