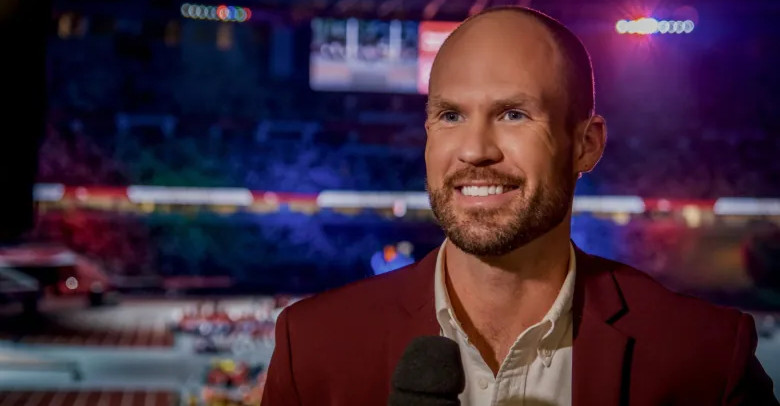 The last two days have seen both NBC and ESPN make the decisions not to send previously-planned on-site personnel to the 2022 Beijing Winter Olympics, with that being event announcers in NBC’s case and reporters in ESPN’s case. We’re now seeing further announcements of people who had planned to cover those Games in-person not going after all, and in some cases, that’s not an organizational policy, but rather a discussion about China’s requirements for media travelling there. CBC’s Devin Heroux has an interesting first-person piece on that; Heroux has covered the last two Olympics in person for CBC, attending the 2018 Pyeongchang Games and the 2021 Tokyo Games (he’s seen above at those) and had planned to do the same for Beijing 2022, but a positive COVID test around Christmas ended that hope for him. Here are his tweets on that:

I'm no longer going to Beijing to cover the Olympics. I tested positive for COVID last month.

While our @CBCOlympics coverage plans continue to evolve, you can be sure I'll be sharing our athlete stories and all the drama from here in Toronto.

For the last two Olympics I've encouraged you all back home to stay awake with me throughout the night while in South Korea and Japan.

Now we'll do it together. Same time zone. My same commitment to you and the athletes to make you feel a little bit closer to the Games.

Higher testing threshold being used in China compared to Canada. Makes it difficult for people in my circumstances to produce negative test.

Without certainty of negative upon arriving in China, I cannot put colleagues nor athletes on flight in jeopardy of being close contact.

And here’s more from that piece he penned for CBC’s website:

Unfortunately my plans to cover the Olympics from Beijing have been derailed. Despite taking every precaution and closely following protocols, a positive test about a month ago is keeping me in Canada.

…On Christmas, I tested positive for COVID-19. Thankfully, my symptoms were mild and my recovery was quick. But when I saw the double lines on the rapid test, there was a sinking feeling for reasons beyond my own health and those around me.

I knew testing for COVID to go to the Olympics would be stringent. But it was a month (30 days to be exact) from when I was to set off for Beijing and I thought — or maybe better put, hoped — I’d be able to meet all the protocols and get to the Games.

I’ve held onto that hope until this week.

To be able to enter China, the Beijing Olympic Committee required three subsequent negative tests from anyone who tested positive within 30 days of departure. I was originally able to meet those requirements, but have since recorded a positive PCR test, residual virus from my infection nearly a month ago.

A higher threshold of testing is being used in China compared to Canada, making it difficult for people in my circumstances to produce a negative test. And without the certainty of knowing I will test negative upon arriving in China, I cannot put my colleagues nor any athletes on the flight over in jeopardy of being deemed a close contact.

Heroux goes on to note that CBC is not sending any staff who have tested positive within the past 30 days, and quotes CBC executive director (CBC Sports and Olympics) Chris Wilson as saying “We knew it was necessary to protect our staff and the project overall, but it also causes a butterfly effect throughout the plan. In the end, we told our team that every decision would be made with health and safety as the top priority and we very clearly lived up to that.” And yes, as with NBC and ESPN, late changes here will alter CBC’s coverage. But as with those other networks, there are definitely advantages to not sending employees for these Games, as this event comes with the risk of forced quarantine and detainment after a positive test there (and even those policies could change at any time).

It’s certainly unfortunate for Heroux not to be able to attend these Games, and it’s unfortunate for CBC that one of their key Olympic journalists won’t be able to go after all thanks to a recent positive. But this story does help illustrate the larger challenges for news and sports organizations in trying to send anyone to cover these Games, and the challenges for anyone with a positive test at any point in trying to go to them. And while certain aspects of the Olympics definitely won’t be quite the same through a remote coverage prism, there are now a whole lot of top-tier reporters covering these Games from a distance. We’ll see how that coverage turns out.