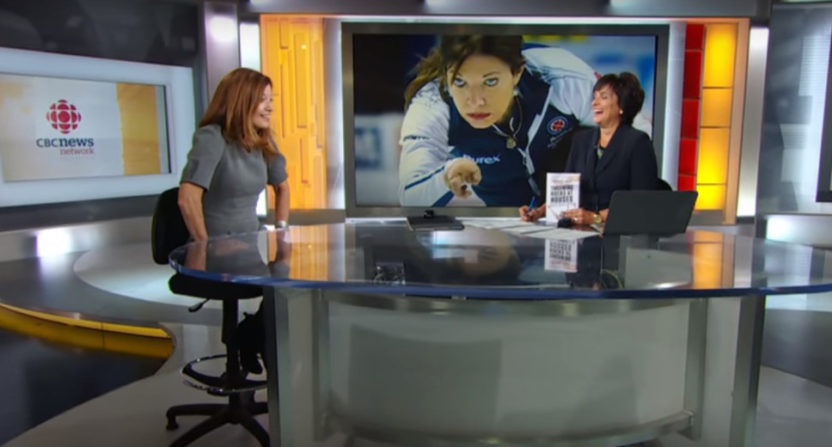 An impressive medal streak has come to an end in surprising fashion, and much of a country is unhappy. But, interestingly enough, a lot of the vitriol isn’t being directed at the Canadian women’s curling team, but rather at the post-game interview conducted by CBC analyst (and long-time prominent curler whose regular job is also as a CBC broadcaster, and who’s covering her 10th Olympics) Colleen Jones (seen at left above in a 2015 interview about her autobiography). First, though, let’s set the stage by talking about just how unusual this defeat was.

Before these Olympics, Canadian curling teams had won medals at every Games where they’d entered; Canada didn’t send a men’s team in 1924 when the sport was first contested at the Olympics, but has sent both a men’s and women’s team since curling returned to the Games in 1998, plus a team in the new mixed doubles event this year. On the men’s side, that’s produced silver-silver-gold-gold-gold, on the women’s, gold-bronze-bronze-silver-gold. But while Canada’s mixed doubles team of John Morris and Kaitlyn Lawes already claimed gold, ensuring the country won’t be shut out, both the men’s and women’s rinks have had their struggles.

On the men’s side, Kevin Koe’s rink suffered Canada’s first-ever Olympic loss to a U.S. men’s team Monday night, falling 9-7 in extra ends. On the women’s side, it’s even worse, with Rachel Homan’s top-ranked rink losing 6-5 to Eve Muirhead’s British team Tuesday (which, interestingly enough, is coached by former Canadian curler Glenn Howard) and being eliminated from medal contention as a result. That will mark the first time ever that Canada won’t win an Olympic medal in a curling event they entered. What’s notable about the social media reaction, though, is while there’s some criticism out there for Homan and her teammates as well as Curling Canada, there’s also a lot of support for them, and perhaps a whole lot more vitriol being directed at Jones for the questions she asked of Homan afterwards.

What the hell was Colleen Jones thinking asking Rachel Homan those types of questions after that interview? Terrible questions. #curling pic.twitter.com/Ck1LPqbqTa

And here are some further examples of the criticism for it:

#cbc Colleen Jones, you suck as an interviewer, classless! To Rachel Homan “Canada is used to gold” & even worse, “How disappointed are you?” She just lost….very! How about you tell her Canada is proud of her team? Knucklehead!

Colleen Jones interview after that game is a joke ! Like seriously ? How do u think they feel? #brutalinterview

@cbccolleenjones What was the point of that interview? “navel gazing” and “how disappointed are you”? Clearly she and the team are disappointed beyond words. You should know better than to ask an athlete stupid questions like that. Talented field, Canada doesn’t own curling.

The CBC interviewer Colleen Jones needs to get some class. Her questions mean spirited just rude.

I agree Colleen Jones that was the worst interview I’ve seen after an athlete lost an elimination game. You should be very embarrassed!! Especially coming from someone who claims to have been a curler and played under the same stress. TERRIBLE!!!

Colleen Jones should be ashamed of herself for her interview with @RHoman89 . Imagine her answering those questions in the moment @Olympics #embarassment #classlesscolleen

Whoever just interviewed Rachel Homan should be fired

I just saw it. Brutal and shocked at Colleen Jones.

Dear @TeamHoman: Ottawa loves you. Canada loves you. And Colleen Jones has no soul. @CBCOlympics

It’s always difficult interviewing an athlete or a team that comes up short, and there can be a challenge in striking the balance between asking questions that will get some insight into what went wrong and being overly critical. But Jones seemed to come off on the wrong side of that here, at least to this observer, and her questions provoked a lot of anger from viewers.

You’re never going to please everyone, and if Jones had gone softer, others undoubtedly would have blasted her for not asking tough questions. But it’s still remarkable to see how so much of the sentiment here isn’t critical of Homan and her team, but rather critical of Jones. She drew the wrath of much of a nation for how she handled this.