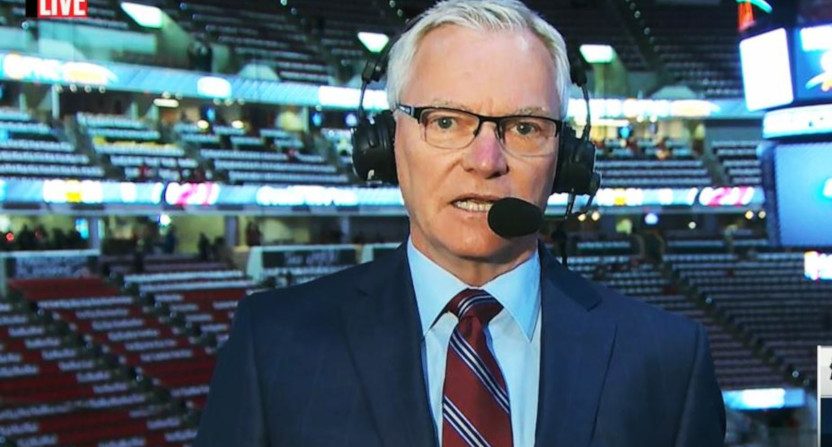 Two weeks ago, Rogers Sportsnet play-by-play broadcaster Jim Hughson (seen above) made some much-criticized on-air remarks about the disorderly conduct charges Toronto Maple Leafs’ captain Auston Matthews is facing in Arizona, which involve him and a group of friends trying to get into a female security officer’s car, then pulling down his pants to moon her while walking away. In the Leafs’ Oct. 2 season opener against the Ottawa Senators, Hughson compared that to a 2012 controversy around intoxicated photos of Chicago Blackhawks’ star Patrick Kane, and Hughson took a lot of criticism for that. On Wednesday, at the start of Sportsnet’s broadcast of the Leafs’ game against the Washington Capitals, Hughson apologized for those past comments. Here’s the apology:

#jimhughson apology about his @AM34 comments from @sportsnet opening night pic.twitter.com/cecbuYEwrU

“Fans, on a recent broadcast, I made some comments on Auston Matthews and his legal situation over the summer. After some reflection, the comments were, in my opinion, inappropriate. But I take responsibility, and I want to apologize.”

Here are the initial comments:

"That's how you put a little problem behind you." Big yikes from Jim Hughson pic.twitter.com/C1fSHRrOIO

“You know about his indiscretion over the summer, or alleged indiscretion. When I thought about that, I looked back to 2012 and thought about Patrick Kane. 24-year-old for the Chicago Blackhawks got into a little trouble with too many cameras around in Wisconsin that summer, and what did he do? He came back and was the Conn Smythe Trophy winner and won the Stanley Cup. And that’s how you put a little problem behind you.”

There were several problems with Hughson’s initial comment. First off, the 2012 photos of Kane showed Kane in an apparent intoxicated state, but they didn’t show any behavior that resulted in criminal charges. So that’s a significant difference from the Matthews situation (and drew criticism for Hughson’s apparent reference to the Matthews case as “a little problem”). But beyond that, that’s the least significant incident involving Kane; Kane was charged with robbery, criminal mischief, and theft of services in 2009 after punching a Buffalo cab driver (he was eventually given a conditional discharge on a plea deal), and he faced rape allegations in 2015. Those charges were eventually dropped and an NHL investigation called them “unfounded,” but they still come to mind for many in discussions of Kane. So bringing up Kane here wasn’t a great decision in the first place.

Beyond that, suggesting that on-ice success is “how you put a little problem behind you” was particularly flawed. That implies that athletic performance outweighs anything else. And while that isn’t actually the case in many situations (consider Rae Carruth, Aaron Hernandez and others who wound up facing major legal consequences despite their athletic stardom), it’s still a problematic idea to endorse. Matthews’ on-ice point totals really won’t have anything to do with his criminal charges, and even a Wayne Gretzky-level performance doesn’t erase those.

Hughson does deserve some credit for addressing this and offering an actual apology, though, even if it’s weeks after the fact. It would have been easy to just let that one lie, especially after much of the world had moved on. And it’s also to Hughson’s credit that he calls his past remarks “inappropriate” and actually apologizes rather than throwing out one of the non-apologies we often see, like  “Sorry to anyone who was offended.” It may have taken a while to get to this, but this was a decent apology.