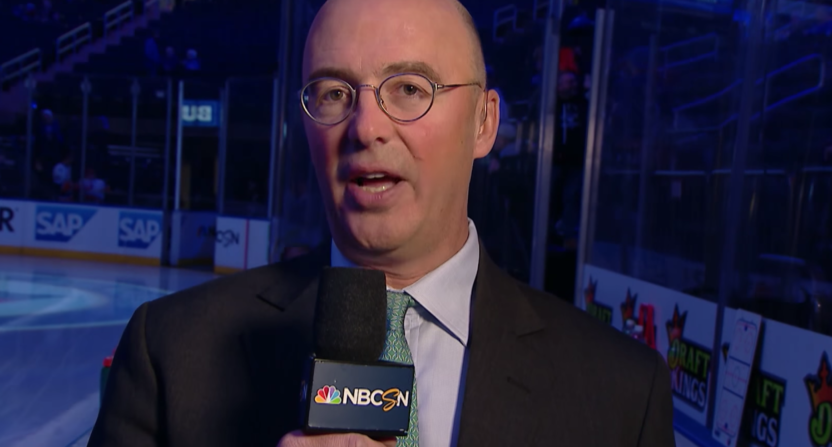 Pierre McGuire has been a longtime hockey analyst for both NBC and TSN. Now he’s moving back into the sport in a more direct way, joining the Ottawa Senators as senior VP of player development, the team announced today.

Prior to his decades in broadcasting, McGuire worked as a head coach, assistant coach, scout, and assistant general manager across various franchises in the NHL, including time spent as an assistant coach for the Senators.

From the team’s announcement:

The Ottawa Senators announced today that the club has appointed Pierre McGuire as senior vice president of player development. He will work closely with Senators general manager Pierre Dorion and team owner Eugene Melnyk as the team continues to develop into a Stanley Cup contender.

“On behalf of the entire Senators organization, I would like to welcome Pierre McGuire back to Ottawa,” said Melnyk. “We are excited to add Pierre to our hockey management group. His experience will be instrumental as we continue to build an elite team. Pierre’s knowledge of the game and its players is highly regarded and I am confident that he will positively assist our team as it progresses to the next level.”

McGuire, 59, arrives in Ottawa in the midst of a long career in both hockey and broadcasting and worked most recently with NBC Sports. He began his coaching career at his alma mater, Hobart College, in Geneva, N.Y., in 1984. He originally joined the Pittsburgh Penguins in 1991 as a scout and later served as Penguins’ assistant coach. He won the Stanley Cup with Pittsburgh in 1992. He later joined the Hartford Whalers and served as an assistant coach, assistant general manager and eventual head coach with the team.

McGuire’s move away from broadcasting comes at a fairly natural stopping point, with NBC stepping away from hockey and American rights going to ESPN and Turner.

Pierre McGuire says he turned down a number of NHL management and coaching offers during his time at NBC to honor his commitment there. NBC not having NHL rights anymore opened this door, as did son Ryan moving on to college.

(We’ll always have that time a puck came perilously close to drilling him before taking out a camera instead.)