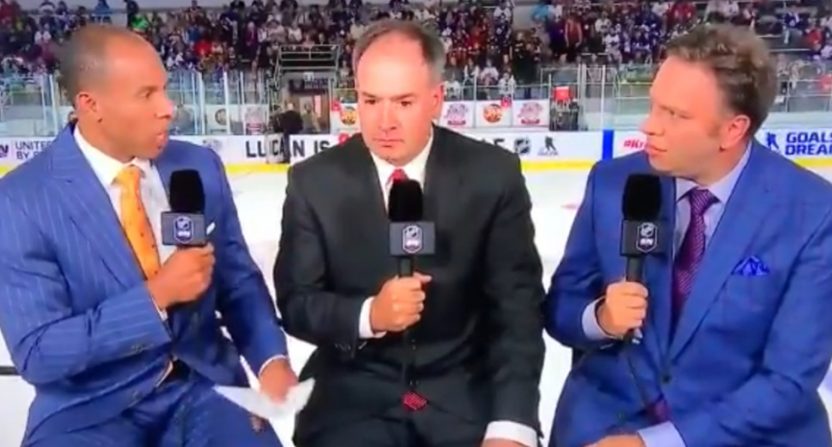 There are plenty of Ottawa Senators’ fans fed up with the team’s recent moves, particularly the trade of captain Erik Karlsson for a return that looks like pennies on the dollar (or even worse than the typical Canada-U.S. exchange rate) and owner Eugene Melnyk’s bizarre interview on the team website. Much-criticized general manager Pierre Dorion didn’t exactly help turn that situation around Tuesday in a pre-game interview on Rogers Sportsnet before the Senators’ preseason game against the Toronto Maple Leafs. When studio host David Amber asked him for “one thing you’re optimistic about in terms of the Ottawa Senators,” Dorion paused for an astounding four seconds before responding in perhaps the least confidence-inspiring way imaginable, saying “We’re a team…”

Yes, they are a team. Whether that’s a NHL-calibre team at this point is debatable, but they are, technically, a team. And sure, Dorion probably went on to expand upon this, but the delay here and the look is just incredibly meme-worthy, and it’s only digging the hole this franchise is in deeper. One Twitter user even went so far as to recut this with the “Hello darkness, my old friend” intro to Simon and Garfunkel’s “The Sound Of Silence”:

And this received plenty of other mockery too, including closeups of Dorion and of reporter Elliotte Friedman (at the right in the clip):

Dorion – “What am I supposed to say?”
Friedman – “The hell is this guy going to say?”

Friedge looks legitimately concerned for his well being lmao

narrator: they were not

Good lord. You can say anything right there other than what you said and it would have been better lololololol

Looks like there’s plenty to be excited about in Ottawa. After all, they’re a team. But maybe a team that might want to give Dorion a little more media training before his next interview…