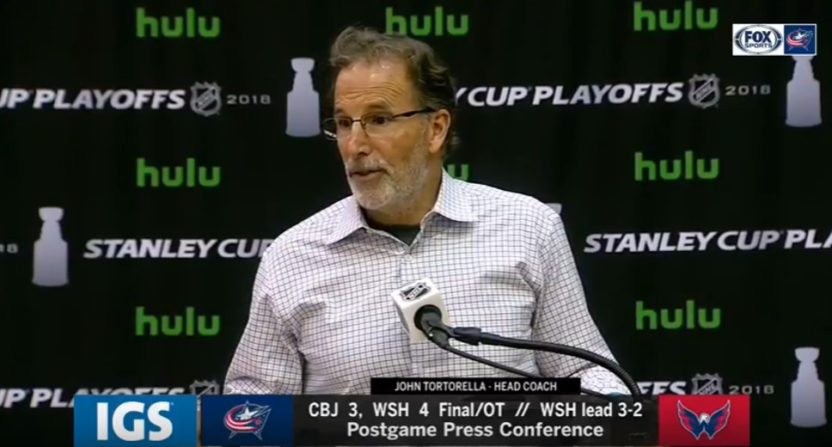 We’ve seen plenty of brusque press conferences and plenty of guarantees in this year’s NHL playoffs, and Columbus Blue Jackets’ head coach John Tortorella combined the two in a press conference after his team’s 4-3 overtime loss to the Washington Capitals in Game 5 Saturday evening. That loss put the Blue Jackets down 3-2 in the series, and Tortorella, long famed for his disdain for press conferences in the first place, was not too thrilled afterwards to be taking questions from media.

And the media weren’t too thrilled to ask questions to the famously-combative Torts, leading to him even remarking about it being “a staring contest” at one point. Also, he responded to a question about Alexander Wennberg (who returned from injury and was an important presence for the Jackets) with just “He played good,” and one about two-goal hero Matt Calvert with just “He played well.” But the first guarantee came near the end (0:55), where Tortorella was asked if his team can move past this tough loss and said “Yeah, yeah, we’ll be back here for Game 7,” and the even better part came shortly after, at 1:24, where someone asked “Tough game for you guys at home in Game 4. How do you get your team ready emotionally for this back home?” and he cut it off with “I won’t have to say a damn word to them before. No, no. We’ll be back here for Game 7.”That’s quite the Torts moment, and if it’s not quite his famed clash with Larry Brooks, the combination of grumpy-at-media and guaranteeing a win is still pretty interesting. And hey, while the media may not have loved this interaction and Tortorella’s combative answers, at least he didn’t walk out as early as he did after Game 4. (After saying just “We weren’t good. There’s no sense asking me things about the game. I’m telling you, we laid an egg. I’m not going to break it down for you. We sucked. We sucked. “We laid an egg. That’s all I have to say, guys. I’m sorry, I’m not going to break it down for you. Nothing went well for us. It’s on us, we have to figure it out and we will.”) But the frustration’s still obvious there, and it’s rising. And if Tortorella’s team doesn’t live up to his guarantee in Game 6, we might really see a press conference meltdown.