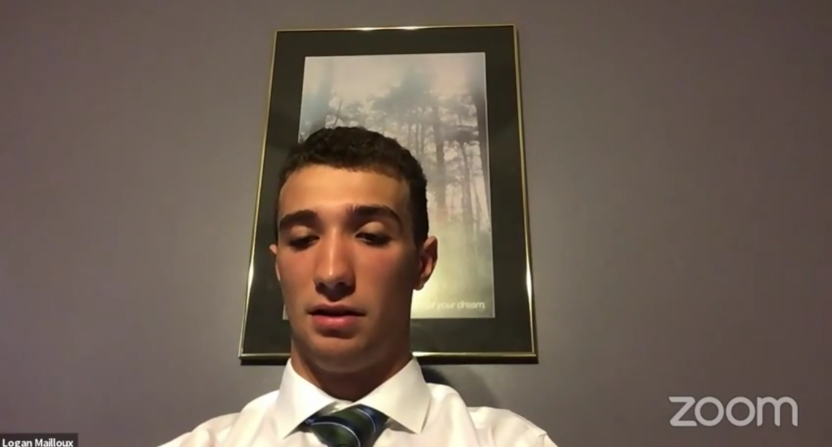 Working in public relations for a sports team can be a difficult job. Teams often make highly-criticized decisions, and the person or group tasked with crafting the official team statement on those decisions (who usually wasn’t involved in the decisions themselves) will often be blasted regardless of what they write. And issuing no statement at all isn’t a winning tactic, either. But there are certainly statements that manage to make the criticism worse still. And the one the Montreal Canadiens put out after selecting Logan Mailloux (seen above on a post-draft Zoom call) in the first round of the 2021 NHL Draft Friday seems to fall in that category.

First, some background on Mailloux, and why this pick is drawing criticism. As per a story from Katie Strang and Corey Pronman of The Athletic last week, Mailloux was issued a summary fine (equivalent to a conviction in Swedish court) last December “for ‘Kränkande fotografering’ (offensive photography constituting an invasion of privacy) and ‘Förtal’ (defamation).” That was for Mailloux (who was playing in Sweden with SK Lejon last winter) taking a photo of a woman performing a sex act, taking that photo without her consent, and sharing the photo amongst his teammates alongside information identifying her.

The woman in question spoke to The Athletic this week and discussed Mailloux’s lack of sincerity in his attempts to apologize. As Frank Seravalli reported at Daily Faceoff last week, the police report here also included Mailloux saying “he had met [the victim] after this [incident] and that she told him that she wanted to ruin his career. [He] explained that the NHL Draft is [on the] way and that she knows this and that it is sensitive.”

As of last week, nine teams indicated they had removed Mailloux from their draft boards. That number rose to 11 around The Athletic’s article this week.  And Mailloux himself eventually wrote that he was “withdrawing” from the draft in a statement on Twitter Tuesday. But that “withdrawal” doesn’t have any actual effect (unlike NBA prospects who can actually withdraw from the draft to return to college), and the Canadiens still drafted Mailloux in the first round (31st overall). And that led to a whole ton of criticism in and of itself, but the statement further amplified it.

The biggest problem with that statement comes in the first paragraph, with “The Canadiens are aware of the situation and by no means minimize the severity of Logan’s actions.” This is a case where actions speak louder than words; selecting a player with this on his record does “minimize the severity of his actions” regardless of where you take that player, and it particularly minimizes those actions if you decide that a player that at least 11 teams have deemed not worth drafting at any point is worth a first-round pick. Beyond that, the final line of “We are also committed to raising awareness among our players about the repercussions of their actions on the lives of others” rings hollow considering the lack of draft consequences Mailloux wound up facing here. TSN’s Bob McKenzie was one of the people who pointed that out:

The only real “victim” in this situation is the teenage woman who actually experienced real repercussions, through no fault of her own. I’m not sure many in hockey thought Mailloux would never be drafted but not sure many figured it would be tonight.

As noted above, this statement did not go over well in general. By 1:10 p.m. Eastern Saturday, that statement had received 395 straight retweets, around 2,400 replies (specific reply number details aren’t shown any longer), 2,563 quote tweets, and 1,957 likes. The old Twitter ratio isn’t entirely applicable following Twitter’s breakout of quote tweets, but the amount of replies and quote tweets for a tweet does still help to illustrate how it’s received. Of course, not all of those replies and quote tweets are always negative. But a brief examination of the quote tweets and replies here does a lot to show how negative they were. And the particular wording of this statement seems like it enhanced the criticism the team took.

There’s a lot of history of draft prospects with previous legal issues across sports, but an interesting element of that is how different the response from teams has been. In rare cases, all teams actually have passed on a player, even when it comes to undrafted free agent contracts; that happened with baseball prospect Luke Heimlich, who pled guilty to one count of sexual molestation in 2012 around an incident involving a six-year-old girl when he was 15. Heimlich wound up playing in Mexico. Another unusual case comes from hockey, where the Arizona Coyotes drafted Mitch Miller in the fourth round last year despite reports of the bullying he committed against a Black developmentally-disabled schoolmate, then renounced his rights after the criticism they got.

More commonly, we’ve sometimes seen all teams pass on a player in the draft, but that player later signed as a free agent. An example there is football prospect La’el Collins, who went undrafted in 2015 around news that police wanted to talk to him about the shooting death of a woman he had a relationship with, but signed with the Dallas Cowboys. (Collins was never named a suspect in that case, and he remains in the NFL.) Beyond that, there have been countless cases of players’ draft stock falling over reported legal issues, but that player still being selected in a later round.

The Mailloux case is quite unusual, though, as his stock sure didn’t fall much. Yes, there’s a chance Mailloux could have been drafted higher without these reports on his past actions, but he probably wouldn’t have been picked much higher; the NHL’s Central Scouting bureau ranked him 23rd amongst North American skaters, so he wasn’t even a first-round lock without this. And as McKenzie tweeted, his selection in the first round after this means there really weren’t draft repercussions for him.

There are two different but related issues at play here: drafting Mailloux (particularly in the first round), and releasing this particular statement. The decision to draft Mailloux was certainly not made by the Canadiens’ public relations staff; it would have been made by general manager Marc Bergevin (who’s facing criticism on another front for his claims that he was unaware of sexual assault reports while he was the Chicago Blackhawks’ director of player personnel in 2010) and his front office team. And that’s the bigger and wider issue here, and that decision would have taken criticism regardless of what the PR staff did. But while the statement is a much smaller aspect of this situation overall, the way it intensified the criticism is quite interesting from a media perspective. It can serve as a case of what not to do.