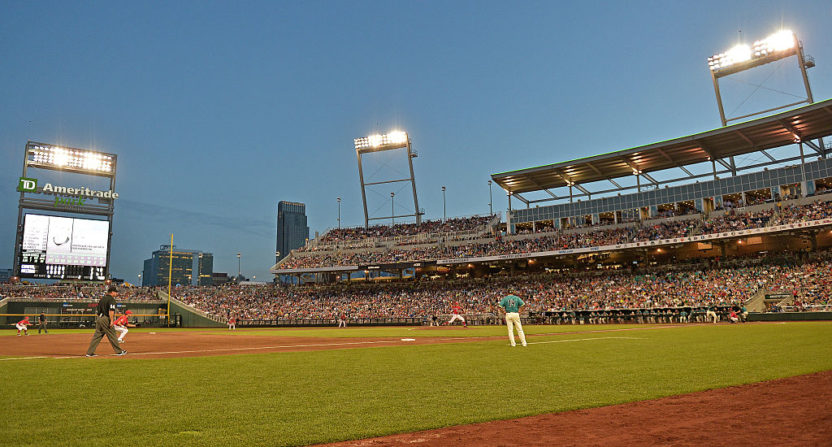 Reporters generally don’t take lightly their ability to ruin someone’s life or career. In most cases, writers and editors deliberate at length over whether to report a certain story and how to report it in the most fair way possible.

On Thursday, the Oregonian gave us a useful glimpse at the decision-making process behind the decision to publish a story about Oregon State baseball ace and MLB Draft prospect Luke Heimlich’s record of sexually violating a young girl.

In a 1,000 word letter from the editor, Mark Katches explained the process behind the story and wrote that “journalists must always follow the story where the facts lead us.”

Quick background: The story, published Thursday, chronicled how Heimlich had sexual contact with a 6-year-old girl when he was 15. Heimlich pleaded guilty to one count of molestation and was forced to register as a sex offender. The Oregonian learned about the incident after Heimlich failed to update his registry in April.

The story was met with a wide range of reactions. Some readers called Heimlich a monster and suggested he be kicked out of Oregon State and denied a chance to play professional baseball. Others questioned whether it was right to eternally punish someone for what he did when he was 15 and whether it was fair to expose him only days before he was to be drafted—thus tanking his draft stock.

Spoke with three teams today already that completely took him off their draft boards. https://t.co/VPIZJiST4l

There are many ways to feel about the whole situation, but it’s clear from Katches’ letter than the Oregonian considered many angles.

Our decision to publish was not made lightly and was the subject of intense discussion in our newsroom.

Some of our readers may say that Heimlich paid for his crime and completed his sentence. Others may argue that mistakes made by a minor should be forgiven, considering that studies show juvenile sex offenders rarely commit additional sex crimes after sentencing. Some will contend that we are undermining both Heimlich and his team as the Beavers embark on a quest to win a third College World Series title and with the major league draft just days away. We considered all of these factors.

Fair or not, the Oregonian defended its story by citing Oregon law, which extends juvenile sex-offender status into adulthood. The paper also argued it wasn’t only spotlighting Heimlich’s crime but was also calling attention to Oregon State’s admissions procedures.

Our society decided long ago that sex offenders should carry the burden of their conviction well after their sentences end – and that juvenile sex crimes should follow offenders into adulthood. Oregon wrote into statute that sex offenders cannot be released from their obligation to register with authorities unless they show a judge “by clear and convincing evidence” that they no longer pose a threat to public safety.

The story also puts the spotlight on the university’s admissions policies. We discovered that several of the teams that Oregon State competes against have stricter rules about whether felons can play college sports.

Oregon State has still not made clear whether its athletic department knew about Heimlich’s conviction and decided he should have a second chance, or whether the college’s system for identifying sex offenders on campus failed to alert university officials. We think that it’s important to understand how our institutions handle these types of sensitive situations.

Katches explained that the story was published at this time not because the Oregonian wanted to hammer Heimlich before he was drafted but because that’s when it was ready to run. The paper found out about Heimlich’s offense during a standard-procedure background check it ran when reporting a profile of him and then put the new story together as quickly as possible. Katches says it was finished Wednesday night and published Thursday.

In conclusion, Katches wrote that:

This is a tragic story on so many levels. But we believed the crime against a young, innocent and defenseless child had to be disclosed and that we had an obligation as journalists to disclose it.

Few reporters are excited to write a story like this. But, at least as those at the Oregonian see it, it’s their responsibility to.