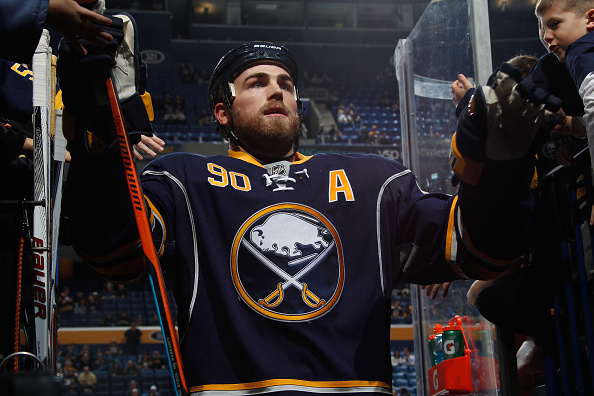 It was announced today Buffalo Sabres center Ryan O’Reilly was named the team’s nominee for the Bill Masterton Memorial Trophy, the award given to the player “who best exemplifies the qualities of perseverance, sportsmanship, and dedication to ice hockey,” voted on by the Buffalo chapter of the Professional Hockey Writers Association. The nomination is a weird one.

O’Reilly, for those who’ve forgotten, was arrested for drunk driving his truck into a Tim Horton’s this offseason. The Masterton Trophy is known as the “role model” award, and is often given to players who overcome injuries, personal tragedy, or impossible odds. O’Reilly has had a nice season on the ice, but his nomination is confusing given his checkered past.

Here’s what Mike Harrington of the Buffalo News wrote about the nomination, citing O’Reilly’s practice regimen as a factor for his nomination.

In his first season with the team after a blockbuster draft-night trade with Colorado, O’Reilly leads all NHL forwards in ice time (21:48 per game). He has 17 goals and leads the Sabres in assists (35), points (52) and faceoff percentage (56.6). O’Reilly was also Buffalo’s lone representative to the All-Star Game in Nashville in January.

But more than just the numbers, O’Reilly has become a de facto captain in the locker room and on the ice.

In what General Manager Tim Murray has dubbed “The O’Reilly Practices,” the 25-year-old routinely stays on the ice after the club’s regular workouts and leads many of his teammates in more extra skills drills after the coaches have left. Pylons, sticks and other barriers fill the ice as the pucks fly, often for another 30-45 minutes. Only when O’Reilly is satisfied with the progress do the others call it a day.

O’Reilly certainly is dedicated to hockey, but his offseason DUI charges should have instantly eliminated him from the conversation. He’s still facing trial for his alleged crime. Buffalo sportswriters seemed to zone in on the “dedication” aspect of the award, and not much else.

The Masterton is great because its nominees act as a list of role models.
Ryan O'Reilly overcame drunkenly crashing a car into a Timmies.

Ryan O'Reilly is so dedicated to hockey, not even a donut shop can stand in his way.

The Masterton Trophy should signify the player on each team you'd want your kid to admire. Ryan O'Reilly isn't on that list.

Playing hockey at a high level after you've done something shitty to someone else off of the ice doesn't make you worthy of the Masterton.

When challenged on the vote, Harrington didn’t exactly respond with a cool head.

@JeffVeillette That's just pathetic. The chapter covers the team every day. You do not. Your "opinion" is thus worthless.

@cad_yellow Which impacts qualifications for this award this season exactly zero. Who are you? Do you cover the team? You do not.

He eventually gave up.

Official notice: I'm done with Twitter today if you're not from Buffalo. I'm done with the clueless trolls from out of town. That's it.

Update: Harrington later returned to Twitter to say the PHWA should rethink the credentials of Yahoo’s Greg Wyshynski for questioning him.

@wyshynski I'm sure the PHWA is happy that's what one of their members thinks of their award. They should rethink your membership.

Ah, there we go. Someone in the club spoke ill of another member. Time to pull his card.

Pulling the “you don’t cover the team, so your opinion is invalid” card isn’t the best way to try to explain your point, and neither is “if you don’t agree with me, you shouldn’t be in the PHWA.” The bottom line is O’Reilly is a perplexing choice for the award, given the past winners and what the trophy stands for. Yes, technically O’Reilly’s dedication could make him seem like a viable nominee, but he’s still facing criminal charges and it’s not like there were other options.

As Adam Herman of the New York Rangers blog Blueshirt Banter points out, defenseman Mark Pysyk – who overcame seizures last year and injuries this season to earn a two-year contract extension– would make for a solid nominee. Honestly, almost every other member of the Sabres organization would make more sense.