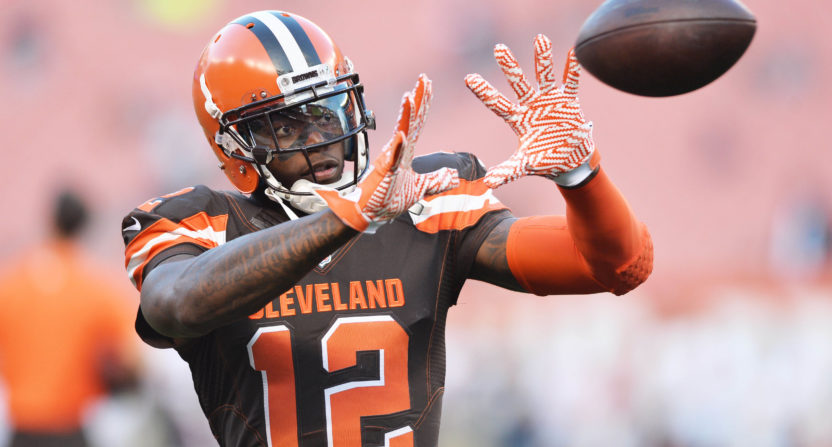 Week 13 in the NFL is about last chances and big opportunities. A number of teams are trying to keep their playoff hopes alive this week (Kansas City Chiefs, Buffalo Bills, Los Angeles Chargers), while others will be attempting to gain an edge over the other top teams in their conference (Minnesota Vikings, New Orleans Saints, Pittsburgh Steelers).

As for everything else that will be going on around the league in Week 13 of the 2017 season, go right ahead and scroll down to see the full game schedule, the announcers for each matchup, and their respective TV maps.

Redskins notes – Rookie running back Samaje Perine is currently Washington’s rushing leader this season with 427 yards. If he is able to end 2017 as the Redskins’ leading rusher, it would be the second straight year that a rookie has led the team in rushing yards in a single season.

Cowboys notes – Injuries and suspensions have Dallas currently experiencing a three-game losing streak. If they end up falling to Washington on Thursday, it would be the second time in three years that the Cowboys have lost four or more in a row during a season.

Vikings notes – Minnesota is on a roll lately and a lot of it has to do with the recent play of running back Latavius Murray. In his last three games, Murray has rushed for 247 yards, averaged 4.8 yards per carry, and scored four touchdowns.

Falcons notes – Top Atlanta corner Desmond Trufant suffered his first-career concussion (documented, at least) last week against the Tampa Bay Buccaneers. As of Wednesday, his status for Week 13 is up in the air and it would certainly be a big blow to the Falcons’ defense if he cannot suit up on Sunday.

Texans notes – Despite only playing in six games, Houston quarterback Tom Savage has managed to turn the ball over 12 times this season. His late-game interception sealed the Texans’ fate in a Week 12 loss to the Baltimore Ravens and Houston head coach Bill O’Brien admitted on Tuesday that a change would have to be made if Savage continues his poor play.

Titans notes – Back in Week 4 when Tennessee faced off against Houston, the Titans’ defense gave up 445 total yards to the Texans’ offense. Sunday’s result will likely be a lot different as Tennessee is 5-2 since that Week 4 loss and their defense has only been allowing an average of 287.3 yards per game to their opponents.

Chiefs notes – It has not been a good last few weeks for Kansas City as the team has lost five of six games since Week 6, after beginning the season 5-0. A lot of their struggles have come from their inability to run the ball like they were during the first part of the year. During their first five games, the Chiefs’ offense ran for an average of 156.2 yards per game. But in their last six matchups, Kansas City has seen that average drop to just 76.3 yards per game.

Jets notes – At his current pace, New York quarterback Josh McCown is set to finish the season with 25 touchdown passes. If this ends up actually happening, McCown would be just the third Jets quarterback since 1999 to end a year having thrown 25 or more touchdowns.

Broncos notes – In five games on the road this season, Denver has yet to come out with a win. The Broncos only have three more matchups away from home this year to try and avoid going winless on the road for the first time in the franchise’s history.

Dolphins notes – After injuring his shoulder in Week 12 against the New England Patriots, Miami running back Damien Williams is not expected to play against Denver. Starting in his place for the Dolphins will be Kenyan Drake, who is averaging 5.1 yards per touch this season.

Colts notes – Last week against the Tennessee Titans, Indianapolis gave up a total of eight sacks. During their Week 7 matchup with Jacksonville, the Colts allowed the Jaguars’ defense to finish the day with a whopping 10 sacks. Should be a fun afternoon for Indianapolis quarterback Jacoby Brissett on Sunday.

Jaguars notes – With three of their final five games against teams with losing records, Jacksonville has a very good opportunity to finish the 2017 season with at least 10 wins. If so, it would be just the third time since 2000 that a Jaguars team has won 10 or more games in a single season.

Bucs notes – After missing three games with a shoulder injury, Tampa Bay quarterback Jameis Winston is expected to return to the starting lineup this week. The Bucs have won just as many games with Winston this season (two) as they have without him.

Packers notes – Currently sitting at 5-6, Green Bay’s chance of making the postseason this year is just about gone unless they win all five of their remaining games. Not since since 2008 (Aaron Rodgers’ first year as a starter) have the Packers played in a season that did not end with them in the playoffs.

Lions notes – As it stands right now, Baltimore is the only remaining opponent on Detroit’s schedule that has a winning record. Which is good for the Lions, since they basically need to win at least four of their final five games to even have a shot at getting into the playoffs.

Ravens notes – The key to Baltimore getting a win this season seems to be their defense holding opponents under 20 points. In the six times this has occurred in 2017, the Ravens are undefeated.

Patriots notes – It’s time for Tom Brady’s annual favorite game of the year. Brady has won 26 of his 29 matchups with Buffalo while throwing for 7,316 yards, 66 touchdowns, and 20 interceptions. The New England quarterback has thrown just one interception in his last five games against the Bills.

Bills notes – Buffalo got off to a nice 5-2 start this season and a lot of their early success had to with them turning the ball over just three times. But in their last four games, the Bills have given the ball away 10 times and unsurprisingly it has resulted in three more losses being added to their record.

49ers notes – Hey, remember that Jimmy Garoppolo quarterback guy San Francisco acquired for a second-round draft pick back in October? Well, the 49ers no longer have any choice but to start him on Sunday after rookie signal caller C.J. Beathard went down with a knee injury last week. San Francisco’s plan to tank the season has been ruined!

Bears notes – As another year of Chicago finishing in last place in the NFC North inches closer to the end, so does John Fox’s time as the Bears’ head coach. After successful stints with the Carolina Panthers and Denver Broncos, Fox has not been able to do much of anything in Chicago and it is even possibly that he could be let go before the team’s final game of the season.

Browns notes – For the first time since 2014, Josh Gordon is expected to suit up in a game for Cleveland. The troubled wide receiver has been out of action for the past two seasons, but Sunday will be the first step in his journey back to being the player that lead the NFL in receiving yards in 2013.

Chargers notes – Despite losing their first four games of the season, Los Angeles not only still has a shot at getting into the playoffs, but they have a decent chance to win the AFC West division as well. The Chargers are 5-2 in their last seven matchups and their final five opponents of the year are a combined 2-8 in their last two games.

Giants notes – New York dropped a bombshell this week when they announced that Eli Manning will not be the starting quarterback on Sunday after holding the job for 210 straight regular season games. In his place will be Geno Smith, not the rookie they selected in the third-round of the 2017 draft in Davis Webb.

Raiders notes – With Michael Crabtree suspended for a game and Amari Cooper’s status up in the air due to a concussion, Oakland will be missing some of their top offensive players this week. For a team that has struggled to score this year (21st in points per game), their job looks like it will be even tougher on Sunday.

Panthers notes – With 464 rushing yards this season, Carolina quarterback Cam Newton is just 22 yards behind the team’s current rushing leader, running back James Stewart. If Newton finishes as the Panthers’ leading rusher in 2017, it will surprisingly be the first time he has ever done so in his seven-year career.

Saints notes – New Orleans rookie running back Alvin Kamara has really emerged as the team’s most dangerous weapon on offense in the recent weeks. In his last five games, Kamara has scored seven touchdowns and averaged 134 total yards per week.

Rams notes – Unlike in years past, Tavon Austin is being used more like a running back by Los Angeles in 2017. During his four previous seasons, Austin averaged around 45 catches and 410 receiving yards per year. However, in 2017 he has only caught 10 passes for 42 yards. Good thing the Rams are paying him $15 million this season.

Cardinals notes – Arizona is the current home to the NFL’s worst rushing offense this year and they are one of five teams in the league who still have not gained 1,000 yards on the ground this season. At their current pace, the Cardinals are set to finish with just 1,165 rushing yards in 2017, which would the second-lowest amount compiled during a single season in the franchise’s history.

Eagles notes –  Philadelphia’s offense may get a lot of credit for their success this year, but their defense has been relentless as well recently. In their last four games, the Eagles’ opponents have averaged just 207 total yards and 11 points.

Seahawks notes – It took a little while, but Seattle tight end Jimmy Graham is beginning to, once again, resemble the player who caught 16 touchdowns back in 2013 when he was a member of the New Orleans Saints. Graham has already found the end zone eight times in 2017, which is the same amount as his past two previous seasons combined.

Steelers notes – After sitting out last week’s game with a hamstring injury, the status of Pittsburgh rookie wide receiver JuJu Smith-Schuster for Monday night is unknown as of Wednesday. If he ends up not being able to play again, the Monday Night Football audience would miss out on a great opportunity to hear Jon Gruden get uncomfortably giddy about the rookie pass-catcher’s abilities.

Bengals notes – Cincinnati quarterback Andy Dalton has been quietly playing pretty well recently. Following a bit of a rough start to the year, Dalton has thrown for 1,012 yards, nine touchdowns, and no interceptions in his last five games.