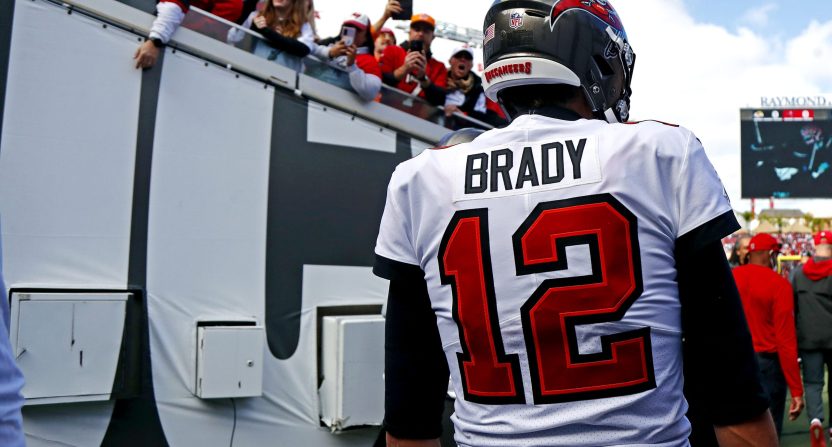 Tom Brady has had one of the most legendary careers in the NFL. Since joining as the 199th pick in the 2000 NFL draft, he had a 20-year period where he drove the New England Patriots to six Super Bowl victories before joining the Tampa Bay Buccaneers and leading them to a win in Super Bowl LV. Will 2022 see him get to the Super Bowl one more time?

Brady wasn’t meant to be taking part in the upcoming NFL season, as he announced his retirement from the sport in February this year. Yet, the 45-year-old quarterback went back on that decision shortly afterward, as he announced that he would be back in Tampa Bay for this season. This was despite a hugely lucrative offer from Fox Sports to work as an analyst for them on a ten-year deal worth $3375 million.

More recently, doubt has been cast over his pre-season work with the Buccaneers, as he missed their training camp for a period of 11 days. This led to social media users pointing out that this coincided with filming for The Masked Singer and that his absence could mean that he’s going to appear in the next series of that show.

When asked about his failure to turn up at the vital training camp, Brady didn’t explain where he had been, but some sources suggest that he was on a family trip to the Bahamas with his wife Gisele Bundchen. Whatever the reason, the QB only participated in the final preseason game, where he completed 44 yards against the Indianapolis Colts.

How Did He Perform Last Season?

Brady’s effect on Tampa Bay since he joined in 2020 has been remarkable. The franchise hadn’t played in the postseason games since 2007 and had gone almost 20 years without even winning a playoff. Yet, he led them to their Super Bowl LV triumph and then performed to a higher level than ever before in 2021.

Remarkably, Brady set a career record for passing yards and led the league in various metrics last season. Extra interest was added to the season with the fact that the Buccaneers wanted to become the first team to win consecutive Super Bowls since Brady and the Patriots did so at the start of the century. However, they fell short in the Divisional Round, as they lost 30-27 to the Los Angeles Rams.

What Can We Expect from This Season?

It still isn’t clear if this is going to be Brady’s last season in the NFL, or if he intends to leave that Fox Sports gig waiting even longer before taking it up. Right now, the question everyone wants to know the answer to is whether he can once again reach the heights that he’s scaled in the past and get to the Super Bowl LVII in Glendale, Arizona.

The top betting sites in the UK like bet365 and BritainBet that are listed on sbo.net show us what the odds are on Brady getting an eighth Super Bowl win in what would be his eleventh appearance. These sportsbooks offer welcome bonuses like free bets, and users can wager on a range of sporting events across the planet. Most betting sites have the Buccaneers as one of the favourites to win the Super Bowl.

Other heavily fancied teams include the Buffalo Bills, who are the choice of many pundits to claim American football’s biggest prize this season. The LA Rams won it last season after beating Tampa Bay, and they’re also among the favourites this time around, alongside powerful teams such as the Green Bay Packers.

Going back to Brady, the QB has a reputation for looking after himself incredibly well, in terms of what he eats and how he trains, which made his absence from the recent training camp even more puzzling. However, there are no signs on the field that he’s letting his standards slip yet.

It’s been suggested that the Buccaneers will adopt a new style this season, by varying their play more. This would mean running the ball more rather than relying on Brady’s passing as they have done in the last couple of seasons. Of course, the success of this tactic is going to come down to the players around Brady, as well as his own ability to carry on playing at the highest level.

In terms of this year’s draft, Tampa Bay added the likes of defensive end Logan Hall and guard Luke Goedeke as their top new recruits, but seem to be relying more on experienced players to guide them through the season. It’s also worth noting that Todd Bowles has moved into the head coach role for this season.

For many NFL fans, Tom Brady winning one final Super Bowl before retiring would be a fitting end to one of the most incredible sporting careers we’ve ever witnessed. Given what he’s done before now in the game, it certainly wouldn’t be a surprise to see him claim one final triumph.