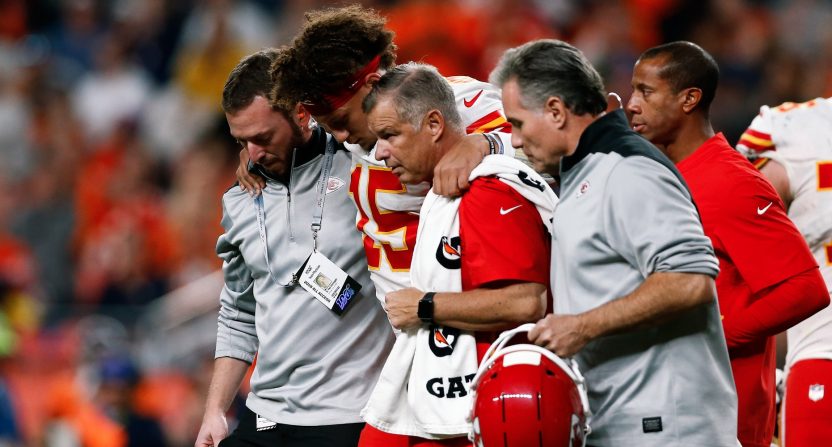 This past Thursday, one of the NFL’s biggest young stars limped off the field in what appeared to be extreme pain. On Saturday, the Heisman front runner and presumed number one overall pick in this next spring’s NFL Draft suffered the same unfortunate fate. Sunday saw both a top five quarterback and receiver exit games with injuries. In each instance, fans, fantasy players, and bettors all scrambled to learn the severity of these injuries.

This increased interest in the health injured players has given rise to the in game Twitter injury analyst. The growing need to know injury information as soon as possible even triggered a New York Times trend piece, titled “N.F.L. Injury Analysis as Fast as You Can Say Ouch.”

When a player gets hurt, fans want to know two things as quickly as possible.

The next natural step is to include injury analysis into games, but when and how will networks take this next step?

The case for such an analyst is pretty straight forward. Many viewers are actively seeking out information about injuries soon after they happen, often paying less attention to the actual broadcast as they do so. The networks in many cases have people already on payroll providing such analysis, although this typically comes in either written articles or on studio shows after the game (DirecTV’s fantasy channel has the closest thing to an injury analyst in Mark Adickes). Now more than ever, there is an appetite for immediate analysis on the implications of injuries because of the increased spread of legalized sports betting. It’s not hard to argue that the average fan would prioritize injury analysis over other niche roles the networks have carved out, increasing those of the officiating and kicking analyst.

While the concept certainly makes sense at first glance and could one day be implemented in some form, there are some significant drawbacks that might not be apparent at first glance.

An in-game injury analyst would certainly decrease the importance of established roles like the sideline reporter and newsbreaker, where people like Lisa Salters and Adam Schefter are already somewhat focused on chasing down injury news. An injury analyst would significantly narrow the scope of their existing roles and influence.

More importantly, I’m not sure the leagues, teams, and conferences would appreciate well reasoned conjecture being presented to millions before any formal diagnosis. Fans being told about a likely injury before the player is even in the locker room getting examined opens up the door to messy situations, even if the analysis ends up being correct.

The more glaring drawback are the optics of trying to put a timetable on an injury minutes after it occurs. A player’s long-term health, well being, and earning potential are all in limbo, it really wouldn’t play well for broadcast partners to quickly jump into conjecture mode trying to figure out how a new injury could impact fans, bettors, and fantasy players. It seems more than a bit dehumanizing, taking the focus off of the player and his teammates and shifting the focus elsewhere without any firm information.

You’d also have to imagine networks would probably go to their injury analysts for more famous skill players, which could be perceived as a slight to those non-offensive skill players, which could further widen the gap of perceived value and importance of certain position groups. Obviously leagues, teams, and conferences would prefer to continue to have some control of how injury information is presented to the public rather than networks making a diagnosis based on video, and its hard to see the leagues not pushing back if the networks eventually go into this direction.

While I don’t think quick turnaround injury analysis is coming to traditional broadcasts of games, it’s only a matter of time before much of the analysis moves off of social media and becomes integrated into live game broadcasts. It will be quite the balancing act to find the platforms, personalities, usage, and tone for this new type of integrated analysis, but it seems inevitable this type of content is relevant enough that you could soon see it presented to you in one form or another, rather than having to seek it out. As we’ve seen many times before, if the leagues and networks can find a way to make money doing it, it’s probably just a matter of time before it happens.