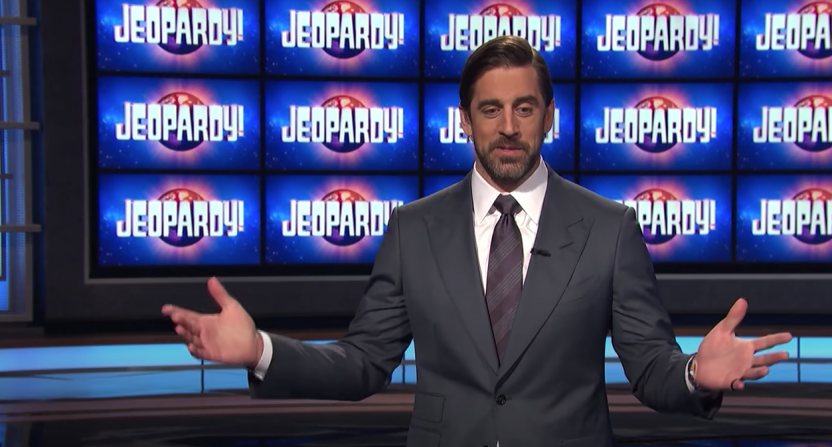 Aaron Rodgers has called some interesting audibles over the years, from New York Bozo to Oscar, Oscar, Oscar. His latest is the boldest of his career.

The immensely popular game show has been searching for a new master of ceremonies since the death of Trebek in November. So far, we’ve seen people like former Jeopardy! champ Ken Jennings, Katie Couric, and Dr. Oz as potential replacements. No one has emerged as a clear-cut frontrunner and there has been no indication of when a permanent host will be named.

Early Vegas odds had Jennings as the betting favorite, but that was before the announcement of Rodgers as a guest host. This is not totally unfamiliar territory. The quarterback appeared on Celebrity Jeopardy! in 2015. He called this return “a once-in-a-lifetime opportunity.”

“When I came on the show, I saw how special this environment was,” Rodgers, 37, said on Jeopardy!’s YouTube channel. “I remember thinking this would be a dream job if Alex ever retired at 90 to come back and be a part of this because I love trivia so much and I love the environment. It’s not like a super-lax environment. There’s an intensity, a focus that comes with the game. I thought it would be a fun challenge.”

It’s already been a memorable 2021 for Rodgers. He won his third MVP trophy, leading the Packers to the NFC Championship game. He’s engaged to actress Shailene Woodley. Now he will be guest hosting a legendary game show. Could this possibly turn into a full-time gig?

If he permanently took over, it stands to reason that his football career would be over. It’s not unprecedented for an NFL player to choose the entertainment business over the sports business. Heck, he wouldn’t even be the first reigning MVP to do so.

Jim Brown, the 1965 MVP, famously quit football at the age of 30 while filming The Dirty Dozen after leading the league in rushing with 1,544 yards in 14-game season. Tony Romo surprisingly retired at 36 to become CBS’s lead analyst for its NFL broadcasts.

The money in TV is great, the job is considerably less physically demanding, and you can have a longer career. (Bob Barker hosted The Price Is Right into his 80s). With the Packers, Rodgers is signed to a four-year, $134 million extension that will pay him $14 million this fall and $25 million in 2022 and 2023. Trebek earned $10 million a year so that will likely be the starting point for his successor’s annual salary.

Of course, it’s one thing for Rodgers to replace Favre. He had been meticulously preparing his entire life to be a pro quarterback. He was ready. There is no playbook for replacing a pop culture icon. Rodgers can’t lead a game-winning drive. Can’t toss one of his signature Hail Marys to win over this audience.

Claire McNear of The Ringer once asked Trebek about his potential successor.

Trebek was popular because for so many he was a connection point. People literally grew up watching him as children with their parents and grandparents. Like a family tradition passed down from generation to generation.

“There is a lot of nostalgia wrapped up in the show for me,” Rodgers said. “I used to watch it when I was a kid when I go on my weeks to my grandma and grandpa’s house. It was a staple in their house every night. I’d sit on the floor and really have no idea what was going on. But I remember the voice of Alek. It was one of the voices of my youth.”

Rodgers knows what he’s getting into. This is where his experience in Green Bay should serve him well. He never tried to be Favre who presented an aw-shucks, regular-guy image to the public. Rodgers is a nerd in shoulder pads who had a cameo in Game of Thrones. He won’t try to be a Trebek clone.

The Atlantic once wrote that Trebek made the biggest trivia nerds look cool. So, Rodgers should fit in seamlessly, at least as a guest host. He said that he “took pages and pages of notes.” He wants to respect the show as well as the audience’s passion for it.

“I studied for this like no other. I wanted to absolutely just crush it,” Rodgers said.

Rodgers is still in his football prime, but he is inching closer to the end. Statistically, no one has played the position better over his 17-year career. Yes, Tom Brady has been more successful, winning seven Super Bowls to Rodgers’ one. But entering the 2020 season, Rodgers owned the highest touchdown-to-interception ratio and top career passer rating in NFL history. Last year, Rodgers won the MVP with only one good wide receiver.

After losing in yet another NFC Championship game, Rodgers said “my future is a beautiful mystery.” That led to speculation about retirement. He has been somewhat cryptic about how long he intends to play football.

What is clear: he can’t pass up on the opportunity to be the permanent host of arguably the greatest game show in television history.