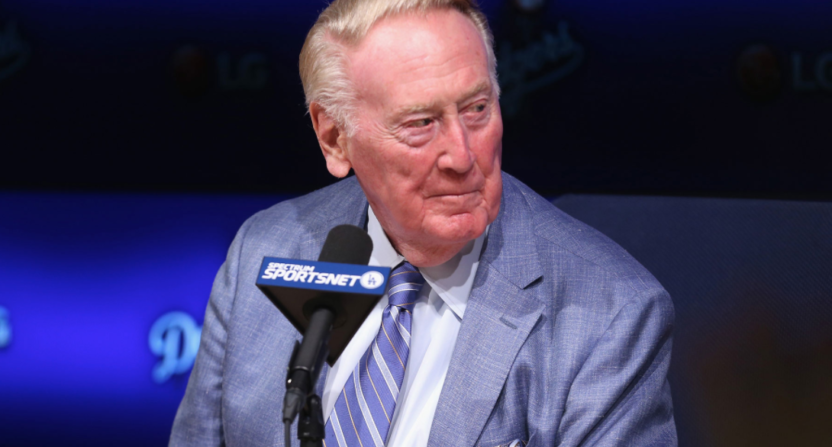 Legendary baseball broadcaster Vin Scully was the attraction Saturday night at the Pasadena Civic Auditorium, as part of the venue’s Distinguished Speaker Series. During An Evening with Vin Scully, the longtime voice of the Los Angeles Dodgers shared stories and experiences from his 67 years of calling games for the team.

But a remark Scully made toward the end of the event is currently drawing attention in regards to current events. The Q&A discussion turned to the issue of player protests during the national anthem, something that has dominated sports discussion for the past couple of months, especially since Donald Trump criticized NFL players for kneeling during the anthem.

Scully has long been one of the most thoughtful, reasoned voices in sports broadcasting during his career, often taking the opportunity to lend perspective to issues and sharing historical lessons to audiences who could learn (or be reminded) from what he said on Dodgers broadcasts.

That was the case when Scully commented on player protests, though what he ultimately said might surprise many people. Naturally, that depends on which side you’ve taken in the debate over these protests. Scully said “I will never watch another NFL game again” because of this. Here is video of the remarks:

“I am so disappointed. And I used to love, during the fall and winter, to watch the NFL on Sunday,” said Scully. “It’s not that I’m some great patriot. I was in the Navy for a year, didn’t go anywhere, didn’t do anything. But I have overwhelming respect and admiration for anyone who puts on a uniform and goes to war.

“So the only thing I can do in my little way is not to preach. I will never watch another NFL game.”

The statement here from Vin Scully should trouble the #NFL. The reaction of the audience is potentially even more ominous https://t.co/B3drQTV5cJ

As NFL reporter Ed Werder points out, that sentiment coming from someone as renowned and respected as Scully isn’t good for the league. Nor is the enthusiastic reaction from the audience after Scully said he’d never watch another NFL game again. (Not to mention this is circulating as Sunday’s Week 9 games are about to begin.) But as Scully explained it, this isn’t an impulsive response from him. His service and feelings about those who serve in the military inform his feelings on the subject.

Plenty of people will respond to Scully’s remarks by saying that the NFL player protests, in addition to demonstrations by athletes across sports, aren’t about the American flag or views toward the military. Beginning with Colin Kaepernick, the protests are intended to draw attention to racial inequality, especially within the criminal justice system in regards to police brutality toward black people in this country.

Others will also mention that Scully was the longtime voice of the Dodgers, who made one of history’s greatest statements against racial injustice and inequality by being the first major league team to sign a black player in Jackie Robinson. How would Robinson feel about these player protests? How might he respond to how Scully has chosen to frame the issue in his view?

Or perhaps he has taken Robinson into consideration and doesn’t believe that what current NFL players are protesting compares to what the Dodgers great experienced in his time.

Some will surely be disappointed by Scully’s remarks, believing that someone who has been a voice of reason for decades, is taking what many will view as the wrong side in this debate. But it’s become clear that many others perceive kneeling during the national anthem as a show of disrespect for the American flag — a symbol they love and cherish — and our troops. Even an association with the NFL is enough to stir up feelings among those who are offended and outraged.