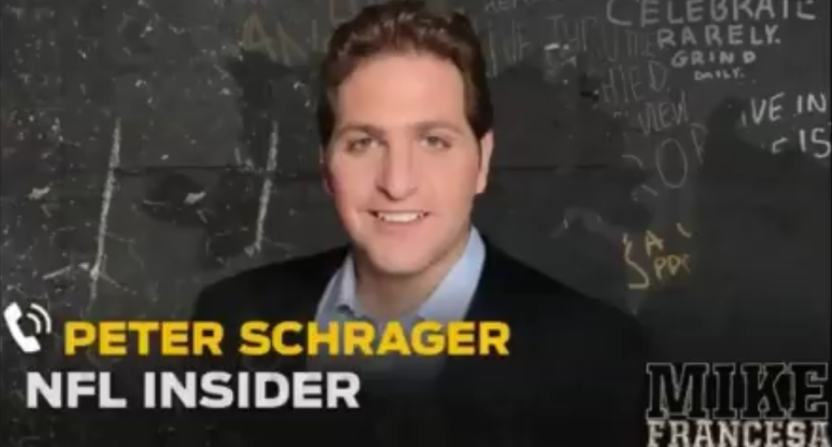 There’s been plenty of discussion of NFL player protests, and if they (or any of the other infinite reasons) are responsible for declining NFL ratings. That debate may never end, but NFL on Fox sideline reporter and NFL Network Good Morning Football co-host Peter Schrager said player protests were definitely responsible for him getting kicked out of a cab in Indianapolis.

On WFAN’s The Mike Francesa Show Friday, Schrager was discussing the impact of those protests with Francesa, and told a story about how an Indianapolis cab driver kicked him out because the driver was so upset with the NFL over player protests. Here’s the clip, from Funhouse:

FOX sideline reporter Peter Schrager got kicked out of a cab in Indianapolis because he's affiliated with the NFL. pic.twitter.com/G72ejhVwK0

“I live in New York, you live in New York, and I also do stuff in L.A., and I sometimes think, ‘All right, here’s my worldview.’ I was in Indianapolis, doing a game in Indianapolis, and a cab driver picks me up and says ‘What do you do for a living?’ and I say ‘Well, I work in the NFL.’ And he stops the car, turns around and says ‘You can get out of the car. The NFL is dead to me. The NFL, the fact that these guys take knees, I will never watch the NFL again.’ It was the first time I had a real-life experience face-to-face with somebody who was that charged up about this issue. And I said ‘Wow, that’s crazy.’ And the more you talk to fans who aren’t on the two coasts, the more you aren’t in blue-state territory, this is a real deal and it is affecting the bottom line. And the owners are seeing this.”

While one cab driver kicking a sideline reporter out of his cab isn’t conclusive evidence about any widespread impact of player protests, Schrager’s story is interesting, and his point is well-taken. There are unquestionably plenty of people mad about protests, and that does probably have some effect on the NFL’s bottom line in everything from ratings to ticket sales to merchandise sales, whether or not it’s the main source of ratings issues. It also clearly has some negative effects on those whose work involves the NFL. Hopefully not every cabbie out there is going to take his frustration out on sideline reporters, but this one certainly did.

If Schrager sees that cab driver again and wants a ride, though, he should pose as a NHL reporter and just start listing off names of 90s and 2000s NHL goalies. “Couldn’t get Ron Tugnutt on the air this week? Tommy Salo wasn’t available? Andrew Raycroft? Corey Schwab not available? Corey Hirsch? Chris Terreri?” It would be hard for anyone to be upset about that.